On a Thursday that swung the coaching carousel ’round and ’round, lots of college football writers and pundits, including those close to the program, viewed Nebraska’s surprise hiring of Mike Riley with approval:

Analysis: In Mike Riley, Nebraska finds what it was searching for http://t.co/eDBycxDVrs via @USATODAYsports @TheFootballFour

Fans and onlookers weren’t as charitable or as optimistic, to say the least:

What a vote of confidence. pic.twitter.com/IF8pPYXcoA

The split in opinion is obvious for a number of reasons:

First, if you’re looking purely at the win-loss records of Riley and the just-fired Bo Pelini, it should be the case that the former Nebraska head coach would have more wins and more nine-win seasons than the Oregon State head coach. One school had a lot more resources than the other, so any notion that Riley’s aggregate win-loss totals should offer cause for concern is overblown. Yet, writers will look at Riley’s ability to “do more with less.” Fans will look at the lack of spectacular seasons and the absence of any recent splash.

Both sides have a point — hence, the split in opinion.

The far more salient criticism to make against Riley is that after a terrific four-year run from 2006 through 2009 — in which Oregon State occasionally played for the Rose Bowl and averaged nine wins per season — the program stalled. The Beavers have had just two winning seasons in the last five. From 2010 through 2014, Oregon State has found it hard to merely win seven regular season games — it has done so only once in that span. When Sean Canfield left after the 2009 season, Oregon State never again found a truly consistent quarterback, and if a Mike Riley-coached team doesn’t have that, it doesn’t have much.

Writers will say that Riley can get his hands on better quarterbacks at Nebraska… and naturally, do a lot more with the position than Pelini ever did. Fans will note that if Riley is a “maximizer,” failing to win seven regular-season games in four of the past five seasons isn’t worth the Nebraska label or the demands of the job description in Lincoln, which is to blend Bo Pelini’s “it could be a lot worse” consistency with occasional domination and generally improved performance in games of particular consequence.

Again, both sides have a point.

Here’s where this hire is truly confusing and hard for many to accept: Had this hire been made in 2010, it would have been an excellent one. In 2014, it’s a head-scratcher. Yes, it could work, but would you really bet a large stack of dollars that Riley eclipses Bo Pelini at this point? Nebraska needed a home run, and this isn’t likely to become one. That’s the immediate verdict on the hire — at least from this vantage point. However, immediate verdicts on hires are often wrong, and regardless of their accuracy, the new coach deserves to have a chance to prove himself.

This leads us to the issues of the moment in Lincoln, as Riley goes about the very crucial process of assembling a staff and trying to take Huskers to greater heights.

Riley needs talent to make this project work — it is the hinge point of athletic director Shawn Eichorst’s curious, out-of-left-field decision. Riley’s coaching acumen — Nebraska hopes — will create top-shelf quarterbacks, maximizing talent at football’s most important position and creating balanced offenses that can do what Wisconsin has done over time, only with more firepower in the passing game. In that sense, “It’s all about the O” is a reference to offense, beginning under center.

It’s on Riley and Riley alone to build up the quarterback spot at Nebraska, in a Big Ten which — as writers such as Mark Hasty will tell you — has languished in recent years because of a valuation of culture over performance. The Big Ten’s identification with culture has, in Hasty’s opinion, led to a number of on-field deficiencies through much (though not all) of the league, one of the main ones being a drop-off in quarterback play.

“It’s all about the O” at Nebraska, in one very real sense.

However, a defense which allowed 408 rushing yards to Melvin Gordon is just as important, which leads us to a second “all about the O” point of emphasis: 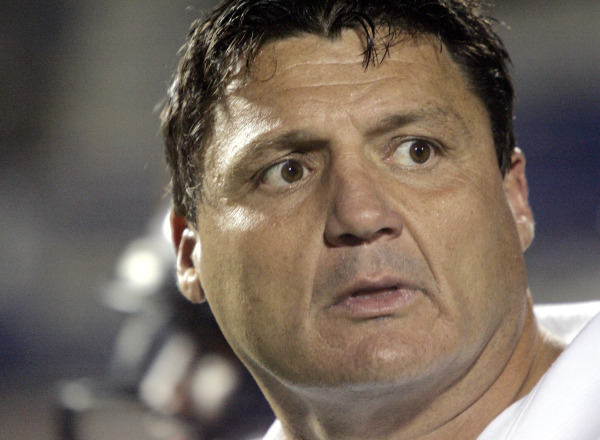 Nebraska doesn’t draw top talent within the state. It has to recruit nationally.

Enter Ed Orgeron, who just happens to have the same agent as Mike Riley:

What others haven’t mentioned is there is a connection between Riley/Ed O. Same agent. #Huskers #Nebraska http://t.co/tg6dDKiVSm

When a coach gets hired, and the hire is questionable (as is certainly the case here), the coordinators and the rest of the staff are the X-factors that can rescue the hire and make it work. Orgeron might want to be the head coach at UNLV, but if Riley can pull him to Lincoln, the Huskers would have the home-run they wanted… just not at the head-coaching spot.

Orgeron could recruit well enough to give Riley the players he needs. If Riley surrounds himself with recruiting titans, he could stockpile the talent that would put him in position to succeed.

The drama was high on College Football Twitter yesterday, as Shawn Eichorst stealthily moved through a coaching search the way a Kansas City Royal swipes second base in the ninth inning of a tied playoff game.

The drama will only escalate in Mike Riley’s courtship of Ed Orgeron. This could be the piece which makes Nebraska’s gamble worthwhile. Should Riley whiff on Coach O, however, you’ll see blood pressure levels rise throughout the Big Red kingdom… and this Big Red Wedding of coach and program could bring about bloodshed… not for the Huskers’ opponents, but for NU itself.