Consider this question: Acknowledging that the season is still a work in progress, which team gave the strongest indication this past weekend that it is likely to emerge as a surprise team in 2014?

Matt Zemek and Bart Doan took a crack at this query, and found answers in different parts of the United States.

The question above is phrased to allow for the reality that one month doesn’t offer cause for full, firm and final verdicts on a season and the teams within it. This is an attempt to make a best guess based on a still-emerging and relatively small amount of evidence.

Based on what I’ve seen through five weeks and this weekend in particular, Missouri is that team.

I did think the Tigers had a realistic shot at the SEC East, but I was like 98.4 percent of the nation in thinking that Georgia and South Carolina would occupy the top two spots in the division. Missouri’s loss to Indiana showed that this team is unmistakably worse than the 2013 edition, but the win over South Carolina this past weekend showed that Maty Mauk is not going to crumble in a season when he’s a known entity and marked man in the SEC. Mauk showed the same moxie and resilience of Connor Shaw in leading Mizzou to the same kind of fourth-quarter Houdini South Carolina forged a year earlier on the Tigers’ home field.

Yes, the SEC East is a ragtag and jumbled division marked by a lot of comparative mediocrity when stacked against the SEC West. Yet, Missouri defending its SEC East title — which it’s now in great position to do — would rate as a surprise in the 2014 college football season. 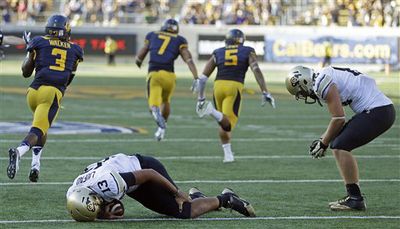 An improbable defensive stop in overtime against Colorado enabled California to say that it did not allow the “Hail Zona” loss to beat the Golden Bears twice. All in all, California has authored one of the better stories in major college football through the first month of the season.

I know this isn’t in the ilk of “surprise team” in the sense of being a contender for any type of title, but there’s a nice little story developing in Sonny Dykes’ second year in Berkeley. While the question is framed “this past weekend” and yes, Colorado has been bad for a while and is by no means some form of signature win, this was a very big get for the Cal Bears.

Hell, this is a football team that was 1-11 last year and is a Hail Mary away from being 4-0 with Arizona Wildcat skin on the wall. Clearly, the Bears are improved beyond expectations.

Jared Goff, he of SEVEN touchdown passes last weekend in the overtime win, is one of the better quarterbacks you probably haven’t heard about. Cal just looks the part. The Bears look like a team that last year was torn down and sacrificed to help build to the larger goal more quickly, and it shows.

They’re a name that could be a factor down the road. UCLA suddenly has to look at that road trip as a real trap game relative to its title chances. Stanford comes there. So does Washington.

Oh, and late in the season? Potentially an unbeaten BYU with the pressure of a CFB Playoff berth should the Cougars keep rolling. Keep an eye on Cal. It’s only a matter of time before 1 win turns to 6, and 6 turns to far more.