Put three college football writers in a room to talk about the Nebraska coaching search. Add water. Watch three different views sprout in three different directions. This is the joy of opinion-giving. You don’t need to take the cookie cutter from the kitchen drawer.

Why are views of the Nebraska coaching search so different? There are different expectations of what Nebraska can be in the 21st century.

The Student Section editors discuss the coaching search that means more to the people of an entire state than any other search on the board.

Where should Nebraska look first for its new head coach?

If I’m making the decision at Nebraska, here’s what I would do.

First, I’d call to former Mount Union head coach Larry Kehres to make certain that he’s finished with coaching. While many would question this move since he’s never coached above the Division III level, his .929 winning percentage – the highest in college football history – demonstrates that he knows how to win games regardless of the circumstances. This unique ability is exactly what the doctor ordered for Nebraska’s rabid fan base, which expects to compete for a national championship every year.

Assuming Kehres wasn’t interested, I’d try to get in contact with Lance Leipold. I know that he just took the job at Buffalo, but it’d be worth seeing if he’d be interested in resurrecting the Big Red Machine. Although he’s only been a head coach for eight years (all at Wisconsin-Whitewater, where he’s 106-6), it’s worth noting that he reached 100 wins faster than any coach in college football history.

Given that Leipold would likely turn down the opportunity out of respect to Buffalo, the next call would be to former Husker quarterback Turner Gill since I would want someone with ties to the program. Sure, he had a bad record at Kansas, but so has every other coach other since Mark Mangino’s dismissal. However, Gill did an excellent job turning around Buffalo (from 2-10 to MAC East Champs) and Liberty (three conference titles and a playoff win over James Madison last weekend). If he can succeed at either of these two schools, there’s no reason he couldn’t win at some place like Nebraska, which has as much talent as any other team in the Big Ten. 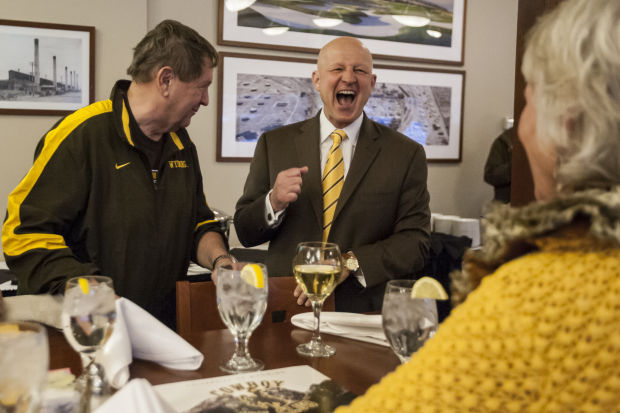 Wyoming head coach Craig Bohl was mentioned by two of our three panelist-editors. Bohl might be the best possible choice for Nebraska if it wants someone with ties to the program.

If Gill were to decline, my fourth choice would be Craig Bohl. Although this move wouldn’t sit well with many Husker fans since he was the defensive coordinator when things started to fall apart under Solich (a 62-36 loss to Colorado when the Blackshirt defense had no answers for the Buffs’ ground game in 2001), Bohl would be an ideal fit for this position. As his career at North Dakota State shows, Bohl has what it takes to build a program, inheriting a 2-8 team and transforming it into a 8-3 squad. Under his leadership, the Bison won three consecutive titles and posted a respectable 8-3 mark against FBS foes from 2006-14, including a win over Kansas State.

The coaches listed above would be my top four candidates. I’d also consider making a run at ex-Wake Forest head coach Jim Grobe, Mike Gundy, or Gary Pinkel if none of the other options pan out. Each of these coaches have turned also-ran programs into division or conference champions.

If those guys all pass, it might be worth making a call to former head coach Frank Solich, who’s done an excellent job turning Ohio into one of the top programs in the MAC.

The question of where Nebraska should look for a new head coach cannot be fully answered without addressing another matter first: How should Nebraska regard itself? This is, in many ways, the true debate underlying the Huskers’ new coaching search.

Many think that Nebraska, being in the middle of the Great Plains, can’t and won’t attract the talent it used to pull in. Many people think that since other schools are no longer scared of Nebraska, the job isn’t what it used to be. This is a valid line of reasoning, but for me, it falls short. (Reminder: Reasoning isn’t invalid just because you disagree with it, and articles aren’t bad just because you disagree with final conclusions. It’s an unofficial statistic that 78.6 percent of readers think columns or op-eds are bad if the writer’s opinion doesn’t match their own view of an issue.)

Is there something overly peculiar about Nebraska which makes this program less renewable than other brand-name programs? When I think of a top program, I utter the name of the school, and I wonder: Is a program worthy of being talked about in this way?

“You’re USC. You should aim for the stars.”

Are those delusional statements or realistic expectations? If unsure, consider these examples:

“You’re ILLINOIS. You should expect to dominate.”

“You’re BOSTON COLLEGE. You should be elite.”

You can figure it out — some programs fit the “You’re X. You should expect to be great” construct. Others don’t.

So, very simply: NEBRASKA. Is that a name which fits the aspirational tag or not? To me, it’s not a debate. 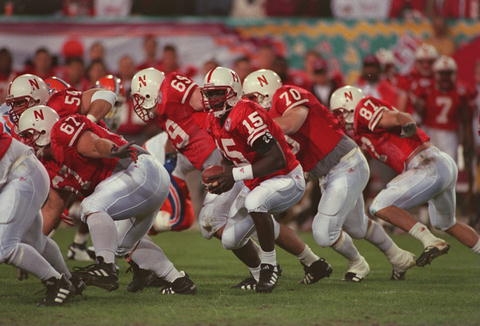 You’ll get a debate from the 2001 Miami crowd, but only 19 years ago, the 1995 Nebraska Cornhuskers produced what is for many the greatest season in modern college football. Expectations of what Nebraska can be sit at the heart of this larger discussion about the Huskers’ head coaching situation… and what’s attainable in the coming weeks.

Let’s now move to the coaching search itself:

Before anyone dumps on Frank Solich, let’s realize that he achieved richly at Nebraska and showed signs of restoring the program before he was fired by former athletic director Steve Pederson in 2003. Solich made a national title game and won a Fiesta Bowl. If we’re going to assess why Nebraska has slipped, maybe — just maybe — it didn’t have great coaches the past 11 years and held on to Pelini too long. A quality coach should want to coach at Nebraska, and a quality coach will make Nebraska great again.

This brings us to a list of possible candidates.

Ultimately, Nebraska should aim for the home run. Since there’s no one on Pelini’s staff who would make a good successor, the school should not pursue a coach who lacks head coaching experience. This means Scott Frost should NOT be the guy.

My top four accounts for the likelihood that Art Briles, Gary Patterson, or David Shaw (the best men for the job) wouldn’t be interested. However, if Nebraska is interested in the home run, it HAS to make a phone call to those three coaches. If Shawn Eichorst doesn’t, he’s not doing his job.

Assuming Briles, Patterson, and Shaw all say no, here’s the next tier of legitimate candidates: Mark Richt, Craig Bohl, Todd Graham (yes, crack the jokes about preparing the resume…), and Jim Grobe.

None of those candidates are too old to take on the job. They’re all experienced and have done hugely significant things in their careers. Bohl hasn’t done anything at the FBS level, but he can be viewed as an exception because he has ties to the Nebraska program. In general, I can see any of these guys wanting the Nebraska job, and if they take over, they would bring more skills to the table than Bo Pelini ever did. 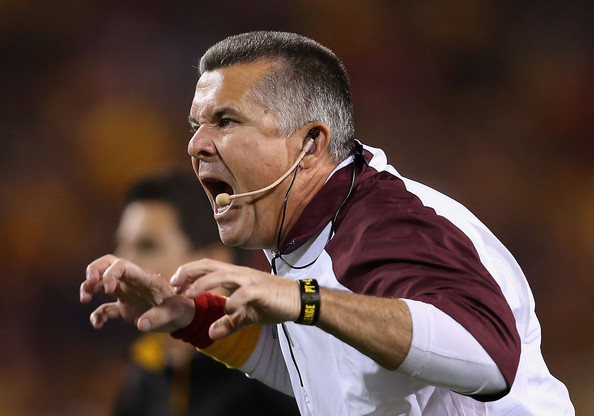 It is true that Nebraska doesn’t inspire fear from other programs anymore. Would Todd Graham, mentioned by two of our panelist-editors, make the Huskers scary again?

They should call Bo Pelini.

Snarky commentary aside …  and I’ve made myself clear that I think Pelini should not have been fired … I have no idea, because I have no idea what exactly Nebraska wants or if what it wants is even feasible.

Nebraska wants to date Mila Kunis and has apparently convinced itself it’s somehow possible, because canning a dude who never won less than nine games in a season suggests the Huskers have an inflated opinion of their expectations. They’re basically dating the pretty waitress, and apparently that wasn’t enough.

You could do much, much worse.

At any rate, if Nebraska has decided that 9-10 wins a season isn’t good enough, I suppose the Huskers should start fruitlessly looking at coaches that will get them over that “mediocre” hump, right?

Who’s out there that will probably lock, stock, and barrel get you there? What, Rich Rodriguez? He’s not coming to Lincoln, sorry.

Whoever they choose, they need someone who fits their football culture. Just being a good coach doesn’t mean you fit the culture of the place you’re at. The aforementioned Rodriguez can coach … but he wasn’t a fit for the culture at his last school.

Pelini seemed to be a rugged, no-nonsense, no-frills, tough coach who understood the Great Plains, and who went to Iowa. Speaking of which, Iowa gets much less from Kirk Ferentz on field than Nebraska did with Pelini, and they stay stable and keep the guy. The grass is not always greener on the other side, and all of that.

Anyways, I suppose if you’re looking for someone who’s going to almost guarantee you 10 wins a year and possibly 11-12 — enough to not get fired — you call those guys. They’ll all say, “Nope, I’m good where I am.”

After that, you’re in that sobering reality, realizing that you might have messed up by breaking up with the pretty waitress, and you start just taking whoever winks at you at the end of the bar and hope for the best.

I’d probably kick the tires on Mark Hudspeth of UL-Lafayette. He’s a fire-breathing young mind in the sport that seems to really have a future at a big program willing to give him chase.

I say this for every open job, but I’ll say Bob Stitt from the Colorado School of Mines, because that’s like having 2 and 3 off suit and being nutty enough to go in and then getting four of a kind on the river.

It’s hard to really project on guys’ jobs, not knowing if they’d leave their current spots for a shot at Nebraska, all while being aware that 9-10 wins will potentially get you fired. Smaller school guys will take a chance at it, but I don’t know who else will.

Todd Graham of Arizona State? Would Gary Patterson be open to it? How about David Cutcliffe?

It’ll be an interesting search and thought process, especially when the hire is made when compared to Pelini. I know this: Nebraska would be wise to hire someone with experience running a program, because the guy will enter a locker room of players that have been wounded by the loss of a guy they enjoyed playing for.