George Wallace’s words in the midst of the tumultuous Civil Rights Era didn’t come true, but in college football’s bowl structure, the Pac-12 and Southeastern Conferences remain segregated. In what has become an enduring and prolonged problem for the sport, two of its Power 5 conferences simply can’t agree on meeting in a bowl game, and this season, none of the New Year’s Six bowl committees were either willing or able to pit at-large candidate Arizona against either Mississippi State or Ole Miss.

The reality of Pac-12/SEC segregation is stark: Since the Bowl Championship Series era began in the 1998 season, these two leagues have played in exactly one BCS or (now) New Year’s Six game. Auburn defeated Oregon, 22-19, in the 2011 BCS National Championship Game in Glendale, Arizona. That’s it. You won’t find any other Pac-12/SEC meeting in a major postseason game over that period of time.

When you realize how many great teams the SEC and the University of Southern California produced in the first decade of the 21st century, it is staggering to realize:

A) how deprived college football fans and chroniclers have been as a result;

B) how much the presence of a four-team playoff OR (as an alternative) a plus-one game after the bowls would have solved the problem of Pac-12/SEC segregation;

C) how much money could have been made if this sport had considered a four-team playoff or a plus one at a much earlier point in time.

A four-team playoff or a plus-one likely would have been able to bring USC and a credentialed SEC champion together in these seasons: 2003, 2004, and 2008. The 2006 and 2007 seasons featured so many nuances and plot twists that one could not say with certainty if a plus-one would have been able to put USC in a matchup with Florida (2006 season) or LSU (2007 season), but in those other instances, a more inclusive structure — giving more teams a chance to compete for the title — would have opened the door for USC-versus-SEC to happen.

The BCS kept that door shut, and over the course of 16 seasons — with 72 BCS bowl games in that span of time — the Pac-12 and SEC faced each other exactly once. (For a full overview of the BCS era, consult this fact sheet I put together at my former place of employment.)

This truly is the great lament — and flaw, and deficit — of the BCS era. The segregation of the Pac-12 and the SEC has prevented so many epic confrontations from taking place. This season, Oregon and Alabama missed each other only because the Crimson Tide couldn’t hold up their end of the bargain against Ohio State in the College Football Playoff semifinals, but at least the opportunity was there for the Pac and the SEC to meet. This window of possibility was a lot more narrow in the BCS, when the national title game was created by a vote-based placement of teams and not semifinal game results. 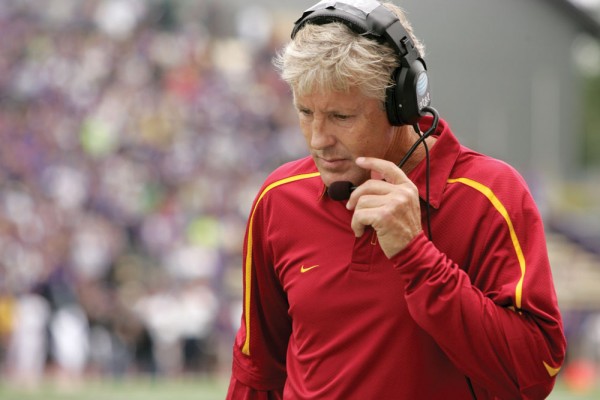 It is easily the great and yawning void in the BCS era and in the modern-day story of college football: USC and various SEC champions never got to meet on the field. That segregation of the Pac-12 and SEC continues in today’s bowl system, which is why it’s hard to compare the two best conferences in college football. If only we had a way to put these teams against each other, then we could find out which league is better. (Eyeroll.)

Is UCLA better than Ole Miss?

Is Georgia better than USC?

Is Arizona better than Mississippi State?

Is Auburn better than Utah?

Is Stanford better than LSU?

We get to see the SEC and ACC lock horns plenty of times in the bowls each year. The same is true for the SEC and the Big Ten. The Pac-12 gets multiple games against the Mountain West, Big Ten, and Big 12. There are all sorts of conference combinations in the bowls (which frankly should not be subjected to any conference tie-ins if we want to create the best 38 matchups across the board, but that’s a separate discussion…). There exists, to some degree, an awareness that bowl games provide an opportunity to create enticing matchups in a football laboratory of sorts.

That the Pac-12 and SEC continue to be excluded from these meetings is precisely what has made it difficult over the years (especially in the BCS era) to claim that college football crowns a “national” champion. A fundamental virtue of the playoff — as seen in its first go-round — is that both Oregon and Ohio State will wind up playing two non-conference opponents outside their own region of the country in order to win the title. Only Alabama and Florida State could have created a same-region title matchup. (Coincidentally, that would have been the matchup in the BCS title game if the BCS had still been around this season.) Therefore, the championship which will be decided on Jan. 12 truly does feel more “national” this time around. That marks a distinct improvement in college football’s larger mechanisms and procedures.

What remains unaddressed, though, is the Pac-12/SEC problem. It’s a problem magnified by the fact that with more bowls than ever — there will be another new bowl next season — it becomes less tenable to defend the notion that the absence of Pac-12/SEC games is a pure accident. Yes, this is in part a response to the reality that Pac-12 fans don’t travel nearly as consistently — or with nearly the same dedication — as SEC fans do. However, with bowls turning to television instead of ticket sales for revenue — a reality that’s been documented over the past few weeks — it’s hard to continue to cite ticket sales with the same doggedness or centrality. Perhaps in 2008, this was a critique more in line with the reality of bowl games. With television taking over, though, and ticket sales becoming less of the foundation for a bowl game’s existence, the reasons for preventing a Pac-12/SEC bowl marriage (or three, or six…) become ever more flimsy with the passage of time.

We’d all like to be able to compare the SEC and the Pac-12, the two best conferences in college football.

Gee, if only there was a way to put them together on the same field.

This was a great deficiency in the sport of college football in 1998. It’s very depressing to realize that it’s just as much of a deficiency in January of 2015.

Maybe one of these decades, college football can fix this problem. (Don’t bet on it.)