Late Saturday night out on the West Coast, Utah capped one of the wildest weekends in college football’s recent memory, and certainly the most bizarre sequence of events thus far in the dawn of the College Football Playoff era.

Utah handed previously unbeaten UCLA its first loss of the season, thus adding quite the wrinkle in the Pac-12 race moving forward. It was the second straight season Utah had defeated a top-10 Pac-12 team, but this one might have been more significant.

Upsetting one top-10 team on your home field can be considered a fluke. Stanford went on to play for (and win) the Pac-12 championship last season, thus earning a spot in the Rose Bowl to face Big Ten champion Michigan State. If you beat a top-10 team two years in a row, all of a sudden people will start looking at your program a little differently. Four seasons into Pac-12 play, Utah may have finally arrived.

Earlier in the day, another former “BCS Buster” candidate, TCU, had its moment in the Texas sun. The No. 25 Horned Frogs threw a cog into the Big 12 race by upsetting No. 4 Oklahoma in Fort Worth. This upcoming weekend, the former “Little Engine That Could” takes to the road to try and do it all over again, at Baylor.

This past weekend may have just been a coincidence on a wild day of college football, but it may also be no accident that we saw Utah and TCU, once perennial BCS-busting threats, land victories against top-10 programs that could prove to have a huge impact on their respective conference races.

It has been only six years since these teams met for the right to face Alabama in the 2009 Sugar Bowl, with Utah outlasting the Frogs due to TCU’s field-goal failures on an emotional Thursday night in Salt Lake City. It has been only four years since these schools then cashed in on terrific opportunities in the realm of conference realignment madness. Meanwhile, Boise State is still playing in the Mountain West Conference, trying (and for the moment, failing) to work its way back into the national picture.

Utah benefitted from the realignment madness that saw the power conferences expand and make a mockery of counting. The Pac-10 missed out on a handful of powerful football schools when Texas, Oklahoma, Texas Tech, Oklahoma State and (ironically) Texas A&M recommitted to the Big 12. A year later Texas A&M would accept an invitation to join the SEC. The Pac-10 already had Colorado on board, but the conference needed one more school to keep things even. With no other Big 12 school interested, the next logical place to look was the Mountain West Conference. That meant Utah or BYU, and for the Pac-10 it looked like a better deal for the conference to bring on the Utes. It also made the most sense, as the conference could easily pair Utah and Colorado as travel partners and make for a better geographical fit and avoid any perceived hassles of dealing with BYU’s program as far as logistics were concerned. 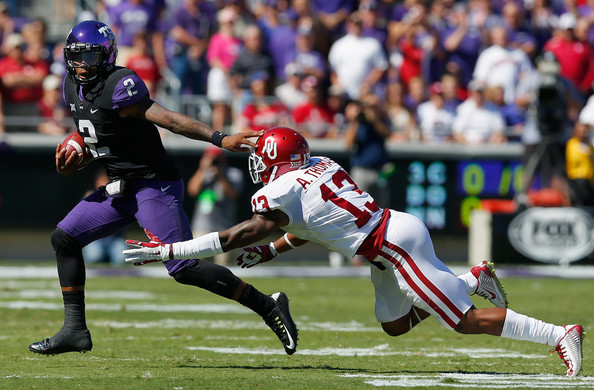 Like Boise State years ago in the 2007 Fiesta Bowl, TCU’s biggtest coming-of-age moment may have come against the Oklahoma Sooners.

The Southwest Conference crumbled after the 1995 season. Texas, Texas A&M, Baylor and Texas Tech merged with the Big 8 to form the Big 12. The Western Athletic Conference opened its doors for TCU and SMU in 1996, but TCU moved to Conference USA in 2001. This also marked the beginning of the Gary Patterson era. The rise of TCU’s program from this point is by no means a coincidence in timing.

Patterson’s role as head coach has been a prominent one, as he has built this program along the way and continues to raise the expectations even now. As a member of Conference USA, TCU finished two seasons ranked in the top 25, but the thoughts of becoming a BCS buster were still years away from coming together.

TCU was aspiring to be Utah, in many ways. Patterson wanted to emulate the success of then-Utah head coach Urban Meyer, who had arrived in Salt Lake City in 2003 and quickly established a winner.

In his first year on the job Meyer coached Utah to a 10-2 season and just the second top-25 finish in the program’s history. The Utes won the Mountain West Conference championship with a 6-1 conference mark. That season set up a magical 2004 campaign in which Utah became the first BCS buster. Utah started the season ranked in the preseason top 25 for the first time in program history, and the Utes did not disappoint. Utah opened the year with wins against Texas A&M and Arizona and proceeded to blitz through conference play, moving up the rankings in the process. At 11-0 with no victories over a top-25 team, Utah was given no chance to play for a national championship under the BCS model, but the Utes were rewarded with a spot in the Fiesta Bowl, where they dominated Big East champion Pittsburgh, 35-7.

That win sent Meyer off to Florida, where he would enjoy even more BCS success, but Utah would not cease to be a BCS buster, as shown in 2008 under current coach Kyle Whittingham. This was more than a Cinderella story at work for Utah. This was a program building something and making a case for a spot in a power conference.

In between BCS appearances by Utah, the nation was introduced to Boise State. The team that plays on a blue field was already making some noise as a dominant force in the WAC under Dan Hawkins, but the Broncos always seemed to struggle against power-conference opponents. The days of expecting Boise State to compete with the likes of Georgia or Oklahoma or Oregon were still years away from developing, but you could tell something was working in Boise. But for how long?

After Hawkins left Boise State for a chance to coach Colorado, Chris Petersen continued to build the program, and he was the one who took things to the next level. The process did not take long, either. In Petersen’s second game as head coach of Boise State, the Broncos finally got the big-game win that had been so elusive over the years with a 42-14 victory over Oregon State. After following that up with a win over Wyoming, the Broncos finally cracked the top 25 and continued to work their way up on a week-by-week basis. 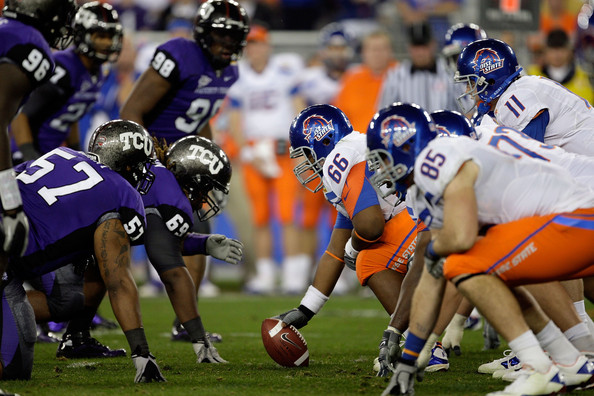 A clash of BCS busters went in favor of Boise State in the 2010 Fiesta Bowl, but TCU was already on its way to a comparatively more secure future.

Boise State climbed the rankings so much that it became impossible to ignore what the Broncos were doing. Boise State became the second BCS buster. Like Utah before them, the Broncos were sent to the Fiesta Bowl to take on mighty Oklahoma, champions of the Big 12 and considered one of the true blueblood programs of the sport. We all know how that one ended. Boise State pulled out some tricks, scored the major upset, and announced to the world, “We’re here to stay.”

Except they weren’t, really. Boise State returned to the Fiesta Bowl three years later, only to be paired up with another BCS buster, TCU. Boise State took the win, but it was TCU that was on track for a brighter future.

In 2010 the Pac-12 lost its spot in the Rose Bowl due to Oregon playing Auburn for the BCS championship. The conference was getting ready to add the original BCS buster, Utah, the following season, so it was a bit of an ironic twist that we saw TCU fill the Pac-12’s spot in the Rose Bowl. After running through the Mountain West Conference with a 12-0 record, the Horned Frogs were once again a BCS buster, the seventh in the history of the BCS system (2 by Utah, 2 by Boise State, 1 by Hawaii, and this second time for TCU). TCU’s Rose Bowl victory over Wisconsin was a crowning achievement in the career of Patterson. Just as significantly, the triumph marked the ultimate announcement to the college football universe that TCU now belonged.

So here we are today: TCU is making a run in the Big 12. Utah is not quite up to that level in the Pac-12, but the program appears to be on a good path moving forward. Boise State may not be in a power conference, but under the new structure of the college football postseason, the Broncos should be able to compete for a big-revenue bowl spot on a regular basis. We have not seen the last of Boise State on the big stage, I believe, but the Broncos will also fall under the Cinderella category.

Maybe that is OK… but it’s not as good as the position TCU currently occupies.

The re-emergence of TCU and Utah this past Saturday might not hold up through the remainder of the season, but if these two teams successfully withstand the challenges of life in their new power-conference homes, so many of the doubts that had begun to encircle these programs will be wiped away.

College football will never be the same… as was the case when TCU, Utah, and Boise State busted up the BCS, beginning with Utah in 2004.