Remember when the Big Ten already seemed to be in a near-death state in terms of getting into the College Football Playoff?

Remember when Oregon looked quite convincing in dispatching Michigan State, and Ohio State lost at home to the same Virginia Tech side that couldn’t handle either East Carolina or Georgia Tech in Blacksburg?

Those events don’t seem to be a month ago in the distorting chamber of memory. Given all that has happened in the following month, those headlines seem to be three or four months ago, existing in a totally different time and place, maybe even belonging to a different sport, for all we know.

Yes, the 2014 college football season — which exploded into chaos on Saturday — seems to have found its unsettled identity, an identity which will demand a lot more study and examination not only in the week to come, but a month from now, when we’ll have 300 more upheavals and plot twists to digest. Naturally, a season defined by disorder will demand supreme vigilance from all playoff contenders. This very much includes Michigan State, which was so lacking in vigilance late in Saturday night’s game against Nebraska that it very nearly blew a 27-3 lead with one careless mistake after another.

Few teams more convincingly throttled an opponent through the first two and a half quarters of week six than the Spartans did against Nebraska, swarming the Huskers to the extent that their offense could not breathe. Michigan State’s offense was volatile and erratic for much of the night, but the defense was essentially letter-perfect through those first two and a half quarters. Michigan State’s defense was so much inside Nebraska’s head that Husker coach Bo Pelini kicked a “Tedford” midway through the third quarter.

A “Tedford” is named after former California head coach Jeff Tedford. It’s a field goal kicked by a team getting shut out in the second half which makes very little difference on the scoreboard, presumably kicked to save face by avoiding the shutout. Tedford had a penchant for doing this at Cal, and so with Nebraska trailing 20-0 past the midway mark (7:30) of the third quarter, a field goal held no substantial value. A three-point tally would have still left Michigan State with a three-possession lead (20-3, 17 points). Yet, Nebraska kicked the Tedford — the Huskers were that conscious of being shut out when a coach should not be concerned about that sort of thing. Michigan State’s defense was that capable of pitching a shutout.

Then, however, the Spartans completely stepped off the gas pedal and, in all three phases of play, suffered from lapses which enabled Nebraska to not only have a shot to win the game in the final minute, but to launch a pass to the end zone which a receiver pawed with one hand but couldn’t fully pull in with under 40 seconds to go. It was only after an interception with 30 seconds left that Michigan State could finally relax. The scoreboard read 27-22 for the Spartans, and they really had survived on an obvious level. Yet, the whole of the game felt like a blowout, the most lopsided five-point win you’ve seen in quite some time.

Michigan State knows it has the makeup of a team that can do a lot of damage, especially in a Big Ten that looks conspicuously weak in so many other places. If this team can develop the vigilance that was missing in the final 20 minutes against Nebraska, it could certainly go 12-1 and reach the College Football Playoff.

Why? Look at what has happened to the Pac-12.

UCLA joined Oregon as a shock loser on home turf this weekend, tumbling to Utah in the late offering on Saturday night. Stanford lost to Notre Dame. USC lost to Arizona State. Strictly in terms of margin for error, the Pac-12 team with more breathing room than any other right now is — don’t laugh (well, okay, you should laugh at this…) — Arizona. All in all, it’s very hard to see how the Pac-12 will produce a single team with fewer than two losses this season.

Remember when the Big Ten was toast? A month later, the Pac-12 is the league in an acutely dire situation if you look at the current landscape. Yes, you might project upcoming losses for other conferences, but the Pac-12 has pretty much ensured that unless one of its teams can somehow turn into a colossus (which is, of course, highly doubtful), it’s looking at a two-loss conference champion at best.

Everything said above about the Pac-12 benefits Michigan State. It also benefits an Ohio State squad that — hey Brady Hoke, see how young players get developed after starting the season in an uncertain way? — is clearly learning how to play together.

This was a common sight on Saturday afternoon in one of the Big Ten’s two new locales: 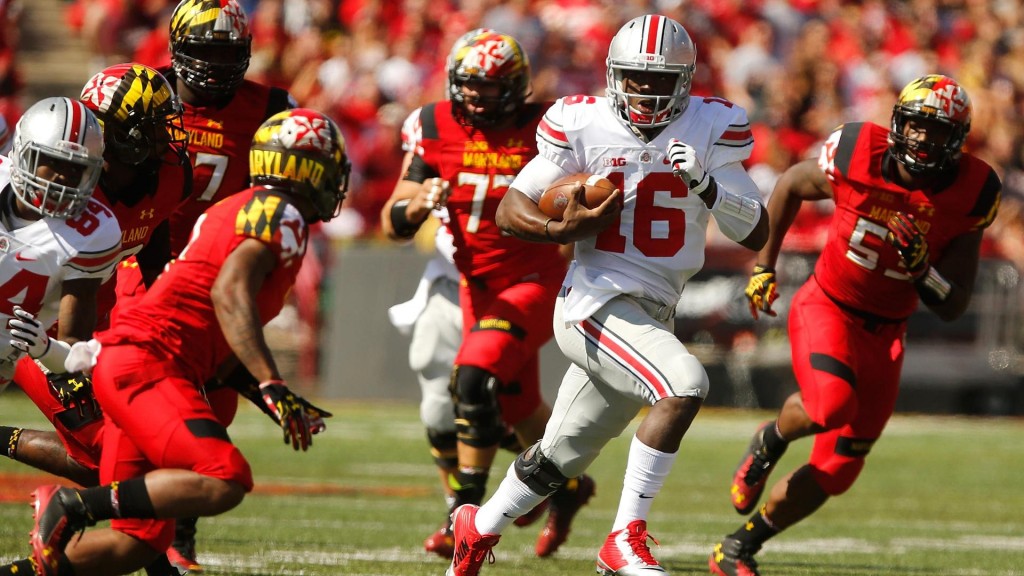 No, Maryland isn’t the bee’s knees, but Ohio State absolutely eviscerated the Terps from start to finish, as an aspiring playoff contender ought to. If you were to look at the whole of the Big Ten right now, you would be hard-pressed to conclude that the upcoming Ohio State-Michigan State game will not crown the league’s champion. Sure, Nebraska — the Big Ten West favorite (with Northwestern sitting in second) — could have something to say about the matter in the Big Ten Championship Game, but Michigan State and Ohio State are the obvious pace-setters in the Midwest, even more than a Notre Dame team which engaged Stanford in an ugly and blooper-filled contest on Saturday.

Michigan State and Ohio State seemed to have been boxed in by circumstances a month ago, but the past month now has the Pac-12 in a bigger playoff bind. Week six churned out hundreds of significant storylines. The Big Ten’s escape from the “odd conference out” designation in the playoff race certainly rates as one of the bigger developments from an unforgettable October weekend.