This has been a magnificent, resplendent, roaring rebound of a season for the Texas Christian Horned Frogs.

Stuck in the muck at 4-8 in 2013, the Frogs faced plenty of questions — all of them legitimate — about their very ability to survive, let alone thrive, in the Big 12. Yes, TCU had endured a lot of bad luck in its first two Big 12 seasons — personal problems for quarterback Casey Pachall; another player quitting football; other players getting booted from the team and/or the school for various kinds of offenses — but for how many seasons can personnel issues get in the way of progress? Patience is a virtue in sports… but it is not a limitless virtue. At some point, leaders and performers have to change the conversation. Everyone in Fort Worth entered 2014 hoping such a story could be authored, but few were convinced this team could go 11-1 and look so good in doing so.

Doug Meacham, the offensive coordinator at the heart of TCU’s turnaround, managed to take the raw skills of quarterback Trevone Boykin and transform them into actualized potential. Head coach Gary Patterson — who had the good sense to hire Meacham in the first place and embrace a new offensive approach — stabilized the team’s defense after its costly fourth-quarter collapse against Baylor. While Oklahoma and Texas — the biggest brand names in the Big 12 — stumble and grope for a stronger, more secure place in the conference, TCU and Baylor are both lookin down on their tradition-soaked competitors, enjoying the view.

Yet, there’s a cruel and bitter twist involved in that fact: Even as TCU rises above the Sooners and Longhorns, it is hard — if not impossible — for the Frogs to shake the notion that if their purple colors were instead the crimson of Boomer Sooner or the burnt orange of Texas, they’d be in the College Football Playoff, preparing to face Alabama in the Sugar Bowl.

Even when TCU wins, it loses. This is an all-too-typical story for a program that has been dragged through several conferences since the death of its longtime home, the Southwest Conference, in 1995. TCU has packed its bags for the WAC and Conference USA and the Mountain West. It jumped to the Big East for a cup of coffee in the realignment whirl, only to realize that its new league — joined in part for the purpose of getting greater access to BCS bowls — was not going to survive much longer as a football entity. The school found refuge in the Big 12, but nearly two decades of a precarious existence relative to conference affiliation underscored the difficulty of life as a TCU coach, player or partisan.

What also underscored the hardship of TCU’s existence over the past few decades was the fact that the Frogs — like fellow traveler Boise State — didn’t always get the bowl they deserved. The 2008 Poinsettia Bowl against Boise State was one such example, the 2011 Poinsettia against Louisiana Tech an even better example. The lack of a playoff system or a plus-one after the bowls deprived TCU of a chance to face Auburn for the 2010 national title, and the BCS locked the Frogs out of the 2009 season’s championship game against Alabama in Pasadena. TCU had a strong claim to the No. 2 ranking in college football at the end of the 2009 regular season. Naturally, Texas — with its long reach and TV clout — boxed the Frogs out of that trip to the Rose Bowl stadium.

To be a Horned Frog is to be overshadowed by bigger, taller creatures… even in moments of success, prosperity and renewal.

It is with this historical pattern in mind that TCU goes to Atlanta, the geographical heart of the Southeastern Conference and a place the Ole Miss Rebels have already played in this season, on Aug. 28 against Boise State. 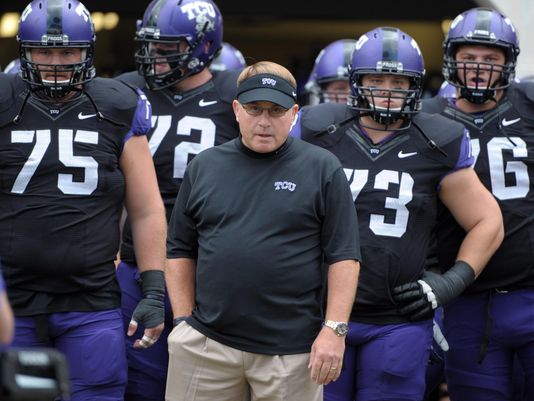 Gary Patterson can only look forward. If he looks back, he and his team might become a pillar of salt against an Ole Miss side which has absolutely nothing to lose in the Peach Bowl.

As mentioned in our examination of conference strength within the context of bowl games, TCU is in a can’t-win position here. If the Frogs defeat Ole Miss, they will have done something they’re expected to do — it’s not their fault, but it’s the reality of their situation.

TCU is a team that tied for the lead in the Big 12 standings — co-champion or not, the Frogs’ place in their league confers upon them a responsibility to do well. Since Ole Miss is the third-best team in the SEC West and therefore probably the third-best team in the SEC, this bowl matchup places the burden on TCU — as the team finishing higher in its conference — to succeed.

When a bowl matchup involves “equal finishers” — the champion of one conference against the champion in another; the runner-up in one league against the runner-up in the other — both teams and conferences share the pressure of the occasion. When the matchups are imbalanced, the higher finisher in one conference is saddled with all the expectations and scrutiny but less of a natural upside if it manages to win. This is much less the case in the Cotton and Orange Bowls, where the matchups are more even on paper and there isn’t a two-win disparity between the two sides as there is in the Peach Bowl.

Can the Horned Frogs value respect enough to play their best game against Ole Miss? They certainly can.

After all, they’ve had to fight for respect — and have done so quite successfully — ever since Gary Patterson took over this program as its permanent head coach in 2001.