College football is a religion for some. If you worship in the church of college pigskin, you know that God created August so that you could prepare for the regular season. One part of the larger process of preparation is to become reacquainted with fundamental tensions in the chess matches you see on Saturday afternoons and evenings. We begin the first of several installments with a look at the most prevalent play-selection tensions based on down-and-distance situations.

5 – SECOND AND 10, SPECIFICALLY AFTER AN INCOMPLETE PASS ON FIRST DOWN

The down-and-distance scenario is more important when trying to identify the right play call in a particular moment, but stop to consider why second-and-10 play selection is more difficult after an incomplete pass than after a stuffed run. When a run goes nowhere and 10 yards are left to make for a first down, it’s hard for any non-triple-option offense to justify anything other than a pass on the subsequent second down. Yes, a draw or a some kind of off-pace or odd-angle running play could certainly work, but on most occasions, it just wouldn’t make sense to throw after going nowhere with a run on first and 10.

It’s on second and 10 after an incomplete pass when play selection becomes the source of more internal conflict for a head coach and a play caller. Certainly, a team leading by seven points with five minutes left in the fourth quarter will be more likely to run the ball, in order to ensure a 45-second runoff. If the endgame is not part of the calculus, though, second-and-10 situations split a playcaller’s mind in two. Do you risk two straight incomplete passes, which lengthen the game and set up a three-and-out, making life that much more difficult for your defense, or do you run the ball, which might make your third down a little more manageable but will probably create a third and six, still an obvious passing situation that could leave your quarterback vulnerable to a defense line that can reasonably expect to attack? 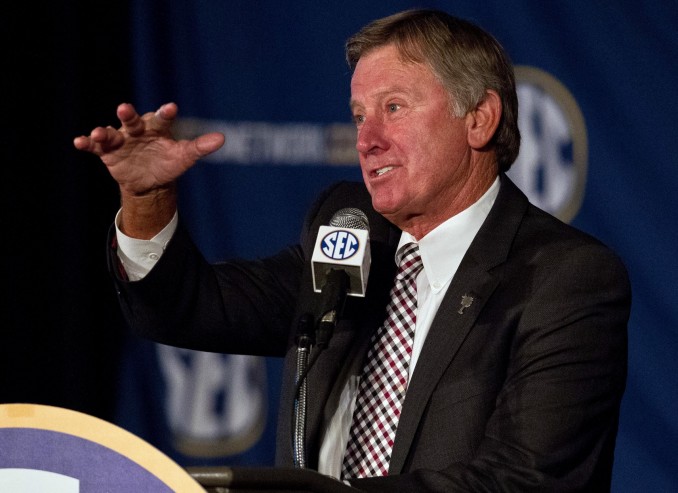 Steve Spurrier had a lot of explaining to do after his performance against Tennessee last season, by far the Head Ball Coach’s worst outing in an otherwise superb year on the sidelines.

One team that struggles with this situation at times is South Carolina, despite the program’s many and considerable successes over the past three seasons. If you look at the fourth-quarter play-by-play log from last year’s loss to Tennessee, Gamecock head coach Steve Spurrier felt he had to pass on second and 10 after incomplete passes on first and 10. These double-failures on first and second down lengthened the game for Tennessee, and they also took the rock out of Mike Davis’s hands. It’s not as though it was imprudent to give Connor Shaw more chances to win, but when balanced against other factors, the abundance of early-down passes did not maximize South Carolina’s chances of winning.

This play-selection tension point flows from an even more basic one:

Once the forward pass became an accepted and appreciably widespread component of the sport, first-and-10 play selection has turned into a regular challenge for playcallers. If second-and-10 play selection following incomplete passes is a stumbling block for many in the profession, first-and-10 chess moves become even more important because they set up second down (when they don’t gain fresh first downs).

The basic question a coach must ask is if he wants to invite a second and seven thanks to a three-yard run on first down, or if the weight of a game plan rests on the ability to set up second and short with an eight-yard pass on first and 10. Naturally, over the course of a full game, play selection can’t always be the same in every down-and-distance circumstance. Mixing things up is a core part of quality playcalling. Maybe a team will want to call 12 runs and 12 passes in 24 first-down situations over the course of a game. Balanced offenses with few evident weaknesses (Florida State, anyone?) can do that. Most teams, though, will likely need to lean in one direction. Those leanings, when taken together, offer an insight into the mind of the playcaller, the philosophy of the team, the nature of the given gameday matchup against a particular opponent, or all of the above.

3 – THIRD AND BETWEEN, OTHERWISE KNOWN AS THIRD AND ANYWHERE FROM 1.5 TO 4 YARDS

Third and six? That’s an obvious passing down with an outside chance of a draw. Third and one? That’s a running down with an outside chance of a pass. In between those distances lie a number of third-down situations in which a pass is more likely than a run, but the relatively short distance to the sticks puts a run very much in play to the extent that a defense cannot assume a pass.

So many either-or dynamics visit a substantial number of football plays and the thought process that goes into them, so it’s not as though the following either-ors are the only ones that can apply here. However, two of the main either-ors on “third and between” plays are “quick or slow” and “width or directness.”

With only 1.5 to four yards needed for a first down, a quick pop to a tight end or seam receiver can do the job. Offenses might try to devise plays so instantaneous in their style of attack that they try to outflank the defense before it has a chance to react. The triple-option “rocket toss,” a very horizontal kind of toss to the outside edge, is a running play designed to win the play as soon as it begins. It’s also a play that seeks to win with width as opposed to a direct push between the hashmarks in the middle third of the field.

On the other hand, some teams might feel so confident in their offensive line that they choose to call dropback passes or straightforward runs in these situations, without any concern for width or outmaneuvering a defense with speed of play or with a flow of action that runs toward the perimeter, outside the numbers.

2 – THIRD AND SIX IN THE OPPONENT’S TERRITORY

However, you will sometimes see coaches call “regular” running plays — in other words, no change of pace or sleight of hand, no change of direction or disguise — on third and six. The next play, on fourth and three, especially from an opponent’s 35-yard line or thereabouts, you’ll see the coach go for the first down instead of punting. The thought process is that a run on third down, when the defense isn’t expecting it, has the chance of busting open a big gain but at least tucks away a few yards so that the subsequent fourth down is a lot shorter and more manageable. If a third-down pass fails and fourth and six arrives, it becomes harder for a coach to:

B) call anything other than a pass if he wants to pursue the first down.

Upon reflection, third-and-six (otherwise known as “third and medium”) play selection in enemy territory is not so much a matter of “run or pass,” but of “elaborate play structure or simplified play structure,” realizing that if fourth down emerges one play later, play callers will want to uncork their very best design in terms of personnel grouping, formation, and overall cleverness.

Stanford coach David Shaw runs a program that prides itself on the ability to get one tough yard in a key situation. Shaw trusted his offense in that sense during the 2014 Rose Bowl against Michigan State, so in that sense, he was philosophically consistent. Yet, his play selection on first down certainly limited his offense’s options. Shaw’s stubbornness was both noble and imprudent; bold and conservative; admirable and counterproductive. Shaw’s performance on New Year’s Day focuses the debate about fourth-and-one play selection.

There is something in football called a “chest-puffing rooster show,” to use a term from longtime analyst Petros Papadakis during the 2005 Fresno State-USC game that lit up the scoreboard and gave Reggie Bush the Heisman Trophy that was later stripped from his hands.

What is a “chest-puffing rooster show,” you ask? It’s the notion that scoring touchdowns in a powerful and manly way makes more of an impression on an opposing defense, consolidating momentum while enhancing belief on the sideline of the team that scored the touchdown. In other words, the way you score can sometimes matter as much as scoring itself. Scoring in a particular fashion can demoralize the opposition and transfer psychological leverage between the white lines of the sporting green.

Teams such as Stanford want to be able to get first downs and touchdowns by running on fourth and one from a heavy-jumbo set. Weak running teams will pass the ball out of necessity, unless the opposing defense can’t stop running plays with any sort of consistency. Matchups will matter, and this is why Michigan State’s stellar defense was up to the task in the 2014 Rose Bowl when Stanford tried to power the ball up the gut.

Yet, if the matchup is not overwhelmingly obvious, what should play callers do? Should they seek to be the chest-puffing rooster? Should they challenge their offensive linemen by calling a simple running play, daring their players to access a greater well of competitive determination? Or, in contrast to that line of thinking, should the reality of 11 men in the tackle box force a play caller to go outside or use a finesse play (maybe a misdirection play) when a full yard needs to be gained on fourth down?

Power or finesse matters to some coaches because it’s a point of pride to be able to get that one crucial fourth-down yard with power and strength. Power or finesse doesn’t matter to other coaches because the attainment of that yard — even if it comes as the result of absolutely no power at all — is the only thing that matters. How coaches attack this situation says so much about how they think through situations, and what they value most in a game… and very possibly, from the teams they guide every week.