It is remarkable to think that just a few weeks ago, on Nov. 15 in Tucson, Arizona, the Washington Huskies — with a first down and under 1:40 on the clock with the Arizona Wildcats having only one timeout — had just about defeated Rich Rodriguez.

They didn’t kneel — Chris Petersen’s charts somehow told him that the Miracle in the Meadowlands from 1978 never happened, and that Joe Pisarcik never changed the way coaches should approach endgame football.

Washington fumbled on that first-down carry.

The rest, as they say, is history.

Given Arizona’s tortured football history, it would have been so easy for the Wildcats to flinch in the spotlight, to wither in the cauldron of late-November pressure.

Instead, the Wildcats played two high-level games. Rodriguez made the most of the breaks he had been given — he capitalized on the assist handed to him by David Shaw and Stanford in the Rose Bowl Stadium. Arizona seized an opportunity with two hands, boldly striding into the Pac-12 Championship Game next Friday night in San Francisco against Oregon.

This is not the Arizona we have known. This is the Arizona which is now one win from the school’s first-ever Pac-12 football championship.

The other side of one team’s unlikely rise to great heights is the ugly collapse from a program that is supposed to achieve richly… but doesn’t. 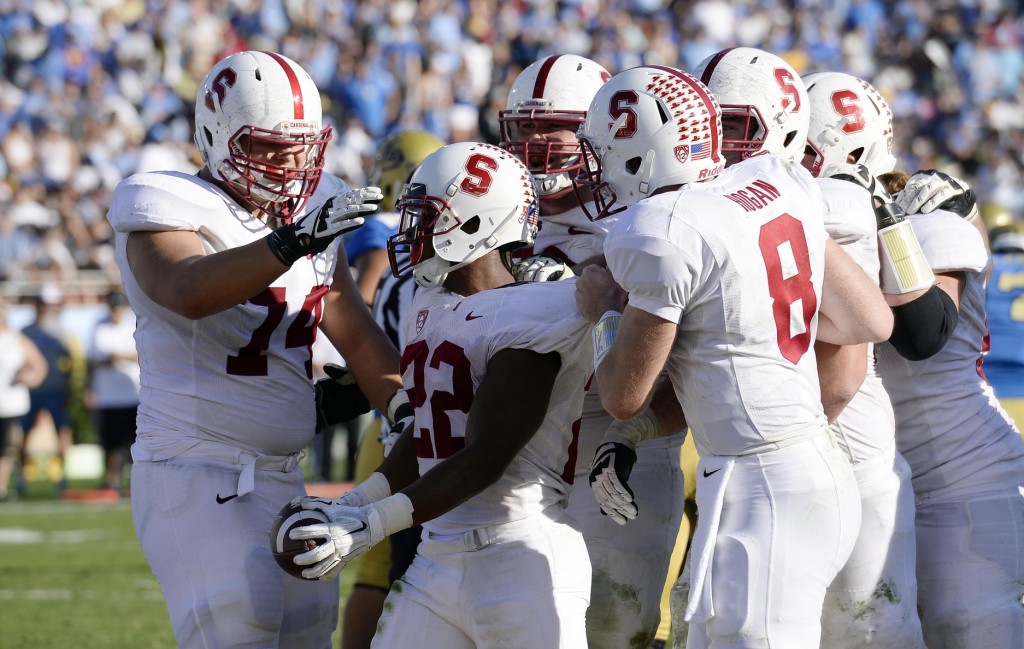 After getting trucked by Stanford on Friday, UCLA will once again exit a college football season with the words “unfulfilled potential” haunting the halls of Westwood. Forget “Clemsoning” as a college football gerund or participle — “UCLA-ing” is much worse.

Jim Mora has insisted his program was fine during the season. For awhile, it seemed Mora was right, and that he was about to shut up his critics. UCLA had a path to the College Football Playoff — not a likely one, but a possible one. All the Bruins had to do was beat 6-5 Stanford to make the Pac-12 title game and get a rematch with Oregon. A win over the Ducks would have thrust the Bruins into the playoff conversation on Selection Sunday, December 7.

Instead, the Bruins did THAT on Friday.

That, of course, refers to a complete no-show, a white-flag-waving performance UCLA fans have come to expect over the years. UCLA made the Rose Bowl as the Pac-10 champion in 1998, and even then, the Bruins lost a late-season game (at Miami) to fall out of the first BCS title game, the 1999 Fiesta Bowl against Tennessee. This is an almost program with a much worse track record of failure in recent seasons than Clemson.

Where have you gone, Terry Donahue? Bruin Nation turns its lonely eyes to you… all while Arizona makes a special piece of history in the Old Pueblo.

This was quite a plot twist in the Pac-12 South, and now, Arizona meets the Ducks for a date with destiny.

Here’s the last time Arizona came as close to winning a Pac-12 title as it will be next week in San Francisco:

UCLA preserved its recent history on Friday. That’s not a good thing at all.

Arizona crushed its long-term history on Friday. The Wildcats and Rich Rodriguez could not be happier about that fact.