Well, this column was only a matter of time coming, like a terrible but popular band having a few good albums and then one of the guys deciding it’s a good idea to go solo and make even more terrible music that mostly sounds the same.

In case anyone hasn’t noticed, the whole conference rooster-measuring contest isn’t going away no matter how many times we poke voodoo (note: not voudou) dolls or throw pennies in a cheap mall fountain and wish that maybe it would.

So with three weeks in the books and “enough” justification to put out a conference ranking piece weekly, away we go. Stupid might not always be preferred, but if you’ve been on social media lately, stupid is popular and a way of life.

With the CFB Playoff coming, the focus isn’t on the “best conference” anymore so much as “the one which will be left out,” which is sort of just rearanging deck chairs on the Titanic, but at least they sort of look nicer this way. So away we go …

(For clarity’s sake, when I say “best win or worst loss,” it’s for overall perception of the conference, not what I think is the best win or loss … or maybe it is, but that’s not the point).

1. SEC: Going into this past week, I’d have said that the Pac-12 gets this spot, so don’t get on that eye-rolling “oh, SEC honk” thing again. From week one, when the SEC took up the lion’s share of Appointment Television games, the conference has for the most part looked good in its wins. Everyone not named Vanderbilt looks solid across the board. I’m not convinced the SEC is as deep as the Pac-12 overall, but it’s a lot closer than where I thought it’d be, as Arkansas and Kentucky look like FBS football teams now.

Best win: Arkansas over Texas Tech. The Hogs were winless in the conference last year taking on an allegedly improving Texas Tech squad under Kliff Kingsbury, who seems to be really popular without actually winning a ton. Arkansas handed it to them, badly.

Worst Loss: Georgia to South Carolina. Forget about it being more grist for the no-defense mill, the loss coupled with Tennessee’s loss to Oklahoma, which was predictable, is a big hit to the SEC East and the CFB Playoff picture. It’s up to Mizzou now, folks. 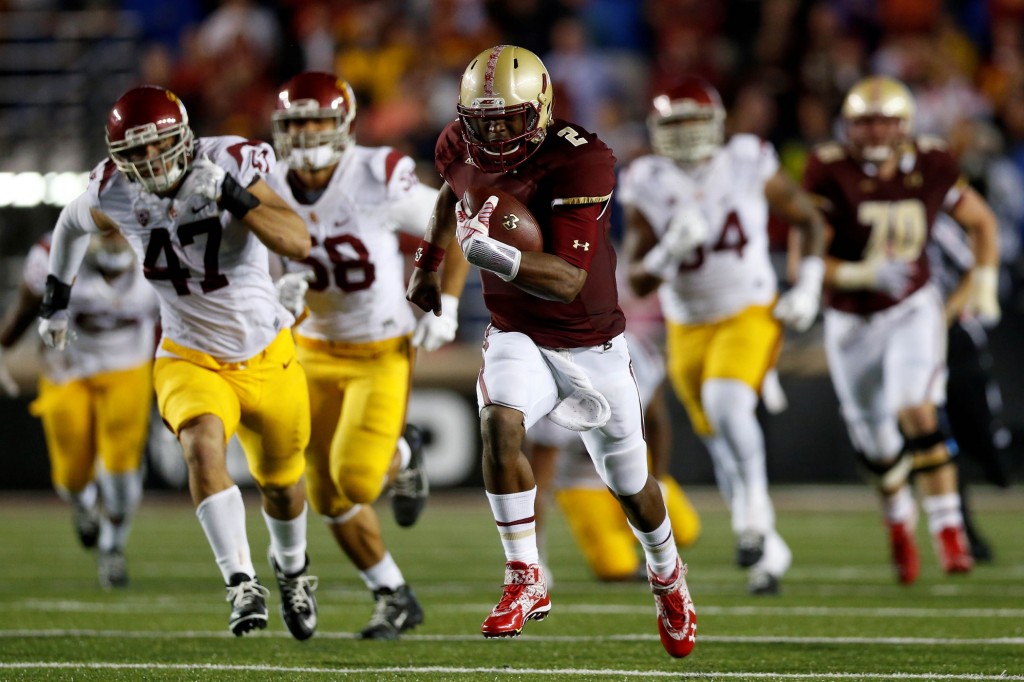 2. Pac-12: If USC wins, this narrative might be different. But if winning lottery tickets grew on trees, we’d all be arborists. Or if No Doubt had ever made good music … wait, that’d never happen. Forget it.

A sneaky big win for the conference was Arizona over a pretty good Nevada team. All in all, it could have been worse, which is what you say after a meal that leaves you at least full enough for a nap. The Pac is still on track to getting a team in the playoff with or without a loss and maybe even two losses, like the SEC.

Best win: UCLA over Texas. The Horns may be in a transition mode coming off a boot stomping, but winning in Arlington with your backup quarterback shows solid resilience.

Worst Loss: USC to Boston College. BC looked like it couldn’t tackle a turtle in a phone booth against Pittsburgh, but just went “pry bar to rotting plywood” to USC’s defensive and offensive lines for like 704 yards rushing. Unofficially, of course.

3. ACC: Aside from Virginia Tech, it was mostly a red letter weekend again for the ACC. Now, East Carolina isn’t exactly tepid bath water, but I think people expected more of the Hokies after caning Ohio State at the Buckeyes’ place the week prior. That loss is pretty much negated by the shocking win of Boston College over USC. Everything else was mostly par for the course. Good thing Maryland is gone. The Terps would be bringing the operation down. Wake Forest doesn’t really need a whole lot of help.

Best Win: BC over USC. It might have been the best win for anyone, anywhere last week. After the game, the BC mascot should have popped on the television with the dripping blood on the screen from Mortal Kombat that says “Boston College wins, brutality.”

Worst Loss: Louisville to Virginia. It was a brutal way to lose, and takes another ACC skin off the nationally-ranked-team wall. Virginia looks surprisingly stout and heck, Louisville is in an odd run-around way, proving how tough the conference is. The Cardinals have gone from the top dog in one conference to probably a mid-tier team in the ACC. The glass is always half full with something, kids, even if it’s just air.

4. Big 12: You’re mostly splitting hairs here with the Big 12 and the ACC, because both are so far ahead of the Big Ten right now, it’s like they’re snagging 5-deer pelts a day while the Big Ten is sitting by the highway with an air pistol saying, “Wonder how they get all the deer to know to cross the road at these yellow signs.”

Oklahoma was impressive. So was West Virginia, winning in Maryland after trying so hard to lose in Maryland. When a team that got drawn and quartered by an FCS school later provides your best win, well, there you go. (See the “Best Win” category in the next paragraph.) Only three games on the slate this week, including ultra-combed-over Kansas State versus Auburn on Thursday.

Best Win: Iowa State over Iowa. If misery loves company, Iowa must be on speed dial. The previously winless Cyclones went into Iowa City and took one from the previously unbeaten Hawkeyes of the Big Ten.

Worst Loss: Texas Tech to Arkansas. Dude, that was brutal.

5. Big Ten: Well, like pretty much every show on MTV, there’s not much to like here. Give the league credit though … it’s consistent. Everyone just assumed you can’t possibly keep up the torrid image-mutilation from the previous week … but the Big Ten found a way to. Still, if a team from the conference finished 12-1, odds are it would probably get in, but it’s certainly not a lock.

Last week was the week for the power teams in the conference to fall flat. Good to know the mid- to lower-tier teams can take their marching orders accordingly the next week. The B1G is a horrid 14-13 against FBS opponents and 1-10 against the Power 5 and Notre Dame. (That stat comes courtesy of colleague Terry Johnson, @SectionTPJ on Twitter).

Best win: Nebraska over Fresno State. Only because Nebraska:

2. is the only team left that is unbeaten and eligible to play in the CFB Playoff, so the Big Ten is hitching a hard star to its success at this point.

Other than Nebraska, what, Purdue played well for a half?

Worst Loss: Take your pick. Indiana lost to a Bowling Green team that got hammered by Western Kentucky. Iowa dropped a rivalry game to ISU, previously winless. Illinois was barely competitive against Washington, which barely beat last year’s one-win Hawaii team and then barely beat an FCS school in week two. Not to be excluded from this list, Minnesota was destroyed by TCU.

The biggest three games for conference perception this week: