It was 1994, and it was just an early season game against Colorado. Some pre-teen Michigan fan was decked out, arguing with his mother about having to attend some mis-scheduled church function because normally, those don’t get scheduled when the Michigan game is on.

This one would cause the kid to miss the ending, which was sacrilige. In some odd, obtuse way, fan logic dictates that if you slack off from watching, the team somehow knows and that’s why it ends up losing. It’s completely and utterly insane, but fan logic isn’t for the sane.

But it was Colorado at home, and even though it’d be close because the games always are, the argument wasn’t getting won and the kid just crossed his fingers and hoped these things don’t get scheduled again.

After said church function is when it became known: Colorado had won. On a Hail Mary, because nothing is more ironic than irony. To that day, that kid promised he’d never again miss the end of a Michigan game in doubt, because obviously the team would win simply because he was watching.

The announced attendance in the Big House on Saturday for the Big Ten opener against Minnesota was a shade under 103,000.

That looks good on paper, but Michigan attendance has become the “George Constanza is an architect” theme of college football: You can say the same thing all you want, but it doesn’t mean it’s true, and it doesn’t mean anyone with half a brain needs to believe it.

I don’t know how many of these same columns can be written, to be honest. Last week it was, “We all have jobs, and Brady Hoke’s is to win football games. He’s not doing that, so like you or I failing at work, adios, nice guy or not.”

This week, it’s just a different style of embarrassing for a program that continues to — instead of clean out the litter box — throw more litter on it on a weekly basis, assuming the feces underneath will … what … go away?

All week, Michigan did the whole “we stand by our coach” thing that you do when everyone’s dumping on your coach and the program you’re a part of. Rumors swirled about the school’s Board of Regents being unhappy with athletic director Dave Brandon. Former players were incensed over what Michigan has become … a program begging students to buy bad soft drinks to get tickets just to bleed out the last few people that might want to go.

Whatever hope existed for an amicable ending to all of this for Michigan ended when Minnesota … 4-39 since the late 1960s against Michigan … paraded on the Wolverines’ field and took back the Little Brown Jug in nasty fashion.

Once again, Michigan looked completely lost and outclassed after halftime. Late in the third quarter, Minnesota had 8 total yards and 10 points in that stanza, a true measure of overall ineptitude from every unit on the Michigan football team.

Then came the crescendo, when a clearly hurt (backup quarterback) Shane Morris continued to be trotted out on the field; was hit enough to make him wobbly; was replaced by Devin Gardner, who had lost his helmet for a play; and then came back in.

Brady Hoke would say after the game that he didn’t see Morris wobbly and that he could only speak for what he personally saw. For a guy who was adamant 10 days ago about how important it was to protect the players, you’d figure that’s something he’d pay attention to.

At this point, it’s either scary apathy or just a complete inability to handle something a coach thought he had the chops to handle. Hoke will be reminded of that at more turns than he would like.

It’s said that you don’t fire coaches mid-season unless the wheels have completely come off in every facet.

Michigan is in a horrible place for this sort of thing, with absolutely zero individuals on staff you want to kick the tires on to see how they can handle a program. Doug Nussmeier has been expensive but terrible thus far. Greg Mattison has been Greg Mattison, but if he wanted to be the head coach of a program, he’d have been one by now considering the accolades he’s received. 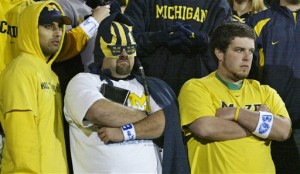 So what is Michigan to do? Maybe let Dave Brandon coach, since he’s so intent on being in the film room all of the time and clearly, it’s what he wants to do.

Michigan mega-donor and Miami Dolphins owner Stephen Ross reiterated his support for Brandon earlier this week. Depending on who you talk to inside Michigan, either Brandon has zero support and is done, or it’s a process that will take forever to be vetted out and is barely on the radar right now.

Michigan isn’t even a month into breaking in a new president in Mark Schlissel, who probably has an inbox full of stuff already to see on Monday that he never had to experience at Brown.

“Why the hell do I have 700 e-mails about this football stuff?!?! And why does everyone hate this Brady Hoke fellow so much?”

This is bad, man. The toxicity level of Michigan football was off the charts coming in. It got so bad that it would have been a positive statement to the fans remaining to just walk out and make the team and staff finish this one out against an empty bunch of seats, but that act had been done a week ago after a rain delay against Utah, and it didn’t actually inspire anything but the sorry “our fans need to support us” junk that makes the rounds any time paying fans boo.

Even if they only bought a bottle of Coke to get in.

Michigan isn’t just bad, it is unforgivably bad. The offense barely looks ready, and the defense looks like it’d be good if the offense wasn’t throwing it under the bus every second of every game.

Late in the first half, backed up inside its own five-yard line, Minnesota just wanted to get out of dodge tied. Brady Hoke wasn’t going to allow that. Michigan called a timeout on third and five, Minnesota converted, and a wave of life swept over the Golden Gophers to the point where they marched all the way down to the Michigan 10 and would have scored seven had the clock allowed.

They settled for a field goal, but the message was obvious: for Hoke, a guy who “coaches by feel,” he has none anymore.

Minnesota tried again in the second half to give Michigan a shot. The Gophers are about as dynamic as Grape Nuts cereal, which is roughly like eating a bowl of dirt. They unwisely came out passing when they were running all over Michigan at the time. Michigan wasn’t interested in their gifts. The Wolverines would get gifted out of a safety, give up only a field goal after an endless string of terrible punts and coverage, and then stab themselves for good with a pick-six that made the score 20-7 in favor of Minnesota, enabling the Gophers to pull away.

By this time, Shane Morris was limping and looked destroyed mentally and physically. So Michigan kept trotting him out there, damaging the present and probably the future as well.

Michigan isn’t worth watching. Tweet out all you want about “support the program” or “real fans would keep the faith,” but bad is bad, and the people that attend Michigan football games pay handsome loot to do so.

Sometimes, turning your back is more help than showing up beating the denial drum, because with enough denial, you basically turn into the Chicago Cubs … we love the team, and it’s never, ever good.

How did it come to this? Who knows. It’s an amalgam of things, like the messy move from Lloyd Carr and then the horrid handling of the entire Rich Rod era. What Dave Brandon did or didn’t do in searching out Rich’s replacement is a talking point, but it’s little else other than a referendum on the ineptitude of hiring a guy with no athletic director experience at this level to be … an athletic director at this level.

There probably shouldn’t be another one of these columns written after next week. Something needs to change, fast, or you’re looking at empty stadiums and a fan base that would rather do homework than go to the games.

Any more of this without change, and Michigan becomes Indiana football for the remainder of 2014, only worse at actual football.

As for the kid in the beginning of the article? I think he’s finished one Michigan game this entire season, that promise of sticking out to the end out of morbid superstition long gone. It’s pointless, when every game is like three hours of being force fed asphalt patch. Michigan plays next week, but there’s probably something else to do that makes more sense than to pay overly close attention.

Even the diehards are dead. It’s at a point of no return. It’s no longer a matter of “when” Michigan can come back, but “if.”

The ghosts of the Big House hang their heads low yet again, and fans that promised they’d watch ’til the end have something, anything, better to do. Hail, Hail to Michigan … and RIP.