Head football coach Brady Hoke is out at Michigan … officially … which comes with all of the surprise of turning on the shower and getting wet.

It’s a sad ending to a Michigan football era that seems perpetually sifting through its pockets to find change to put in the parking meter and coming up with nothing but lint. Why? Because Brady Hoke cared about Michigan, and probably still does.

The first fundamental building block of success in anything is caring about what you’re doing or putting people around you that care deeply. Hoke entered Michigan after the ghastly Rich Rodriguez era … ghastly because Michigan wasn’t used to it.

Hoke was everything that Rich Rod was assumed to not be … he played that “man ball” style of football, wanted to have a pro-style offense, bled maize and blue blood from the time he was born. He “got it.” He “understood.”

However, aside from being romantically involved with someone, simply caring a lot isn’t typically enough. It needs to be supplemented with something else, and in the world of coaching sports, that something else is and always will be “wins.”

Hoke entered Michigan with a career losing record of 47-50, which drew eyebrow raises, but it was always important to be fair about that number. Hoke had been at Ball State and San Diego State, and when he entered he basically was given two sticks and an empty bottle of lighter fluid and asked to make a camp fire.

Early returns were good, even though there was always speculation that Hoke was hired by then-athletic director Dave Brandon because they were buddies, and Brandon wanted to be probably more the part of a football program than most athletic directors are, doing things like hanging out in the film room with the team. You can think whatever you want of it.

The truth is, people wanted something other than Rich Rodriguez, which at the time may have been shortsighted or may have just been an unfair assessment of how things go anymore. Lloyd Carr spoiled Michigan fans, and they probably realize that now.

Hoke’s first year to this year journey parallels the spin fans will put on instances when they like or don’t like the guy in charge, always related to that winning stuff above. The initial reaction — “Wow, look what he did with Rich Rod’s players! Wait until he gets his guys that fit his system in here!” — turned into, “Whatever, guy could only win with Rich Rod’s players,” as the losses started piling up and that 11-2 season in 2011 was forgotten.

It turns out all the stuff about Rich Rodriguez “understanding Michigan” might have been shortsighted too, because if anyone was set to understand Michigan, it was former player-turned-AD Brandon. Yet it was Brandon who trifled with things that made “M” fans red, things like priority seating, raised ticket prices, goofy in-game gimmicks, noodles, and the “unretiring” of jerseys thing.

Had Rodriguez tried pulling some of that stuff … actually, forget it. I don’t want to think about that. 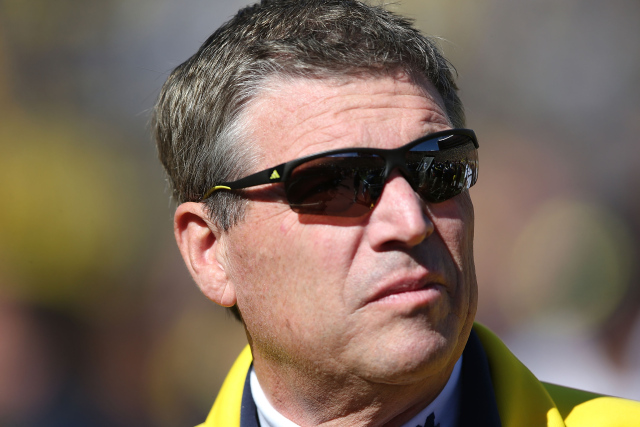 David Brandon is no longer the athletic director at the University of Michigan… largely because the coach he hired, Brady Hoke, just got fired on Tuesday afternoon. This particular union of athletic director and head football coach did not give the Wolverines the stability they sought after the turbulent and divisive Rich Rodriguez era in Ann Arbor.

Hoke was always a bit handicapped by the fact that the guy who hired him was disliked and perceived as only being around because that guy and he were friends. When Michigan lost out on Les Miles in 2007 and then Jim Harbaugh in 2011, there was angst, and depending on who you believe in 2011, Hoke was called in to talk shop while Miles and Harbaugh were not.

Hoke’s real issue at Michigan came not in caring about the program or the players. His graduation rates were raised. He was Michigan through and through. It came in the fundamental issue of bad coaching despite an embarrassment of resources to help give him every advantage possible.

Former offensive coordinator Al Borges came along with him, but defensive coordinator Greg Mattison was brought in, and considering his background, wasn’t cheap. When Borges and the offense bogged down, Brandon went out and paid handsomely for Doug Nussmeier of Alabama, considered one of the bright, young minds in college football.

Again, what would have happened if Rodriguez had that? Why did he not? I honestly cannot tell you. All I can tell you is that in the end, it’s about wins and losses.

And the losses just started piling up. Suddenly, all the” rah-rah, look how into-it he is” from that first year had turned into, “Coach never wears a headset. Coach has no idea what’s going on. Coach is an overpaid cheer leader. Oh, look, Rich Rodriguez is beating Oregon and ranked in the top 15.”

That ex-girlfriend you gave away suddenly seems to look like a 10 again, right?

At any rate, Hoke’s real flaws were that Michigan regressed badly and couldn’t win the games that tilt recruits. His lone win over Michigan State was a game in which the Wolverines failed to score a touchdown and won on a last-second field goal.

His only win in The Game came at home with a severely undermanned Ohio State team in his first year, going through the unexpected loss of head coach Jim Tressel and slogging through a painful transition. Hoke was okay against Notre Dame, but that carries less weight than it used to.

Some of the fury placed at Hoke’s feet was out of his control. Right or wrong, it felt like Hoke had to take too many absolute marching orders from Brandon and came out looking ragged and worn down in the process. The Shane Morris concussion ordeal was a big deal because Michigan couldn’t beat a rug at the time, but the communication errors, at least as they were presented publicly — with Brandon and Hoke seemingly on different pages before meeting with the press — were galling for a top-shelf football program.

Hoke also didn’t improve as a coach. It its last home game this season against Maryland, Michigan had a staggering zero NFL scouts apply to be there. At Michigan. That shows a precipitous drop in player development. It’s Michigan for crissakes. They should have ONE NFL player on the roster worth checking out every game.

And of course, there were the losses. Combined with the perceived (by the NFL) lack of talent, the actual losing to teams and often being non-competitive in those games, and the inability to develop anyone at the quarterback position to unseat a struggling senior who was recruited by Rodriguez … those are the reasons coaches get fired.

You feel bad, because Hoke graduated players; seemed like a very well-liked and good human being; and did his best as he could at having to deal with off-field issues (involving Brendan Gibbons, Taylor Lewan, Shane Morris). Again, he cared about Michigan.

Where the Wolverines go from here is up for you to debate for yourself right now. All I can tell you is, don’t believe everything you read on the Internet, which doesn’t matter … because you will. These things don’t happen overnight, and yes, they are fluid. Look at Les Miles in 2007. You think you know, but really, you don’t.

Interim (technically) AD Jim Hackett was succinct when talking about Hoke at the press conference on Tuesday, praising Hoke the man, but saying he essentially had enough time to show results and couldn’t get the necessary wins. He noted that Michigan will move on and use a headhunting firm to help vet out candidates, and that the coach must be consistent with Michigan’s values.

Where that goes, one can debate. President Mark Schlissel has mentioned that he wants the athletic department to operate with academics in mind, and was disappointed in some of the past events in that regard. It doesn’t mean that Michigan is becoming Stanford, but Michigan fans wanted Schlissel involved. So he is.

All I know is Michigan hits yet another crossroads, popping in a CD from yesteryear and reminiscing about those long drives deep into the night with that ole girlfriend when things weren’t so damned complicated and everything seemed to fall into place, as if it was owed to you.

That world no longer exists. It can come back, but it won’t happen overnight.

At any rate, thank you, Brady Hoke, because regardless of what the outcome was, there was never a worry that you didn’t care.