Human beings might not actively think about the past in the midst of a difficult situation, but images from previous experiences can certainly creep into the mind’s eye when a stressful scenario emerges. We recall the fear or trauma of something we’ve encountered before. We carry heartbreak with us as well as the joy we might have felt on those occasions when we overcame a large obstacle.

There certainly had to be a few moments on Saturday in Morgantown, West Virginia, when the TCU Horned Frogs wondered if they’d ever be able to climb the mountain against the homestanding Mountaineers. One by one, TCU gained possessions that started in West Virginia territory. One by one, the Horned Frogs threw away those possessions, failing to score so much as three points on any of them. When TCU responded to the sloppiness of West Virginia quarterback Clint Trickett with some decidedly ragged play by its own signal caller, Trevone Boykin, the Horned Frogs had to feel that they had already missed some of their best chances to win the game.

When West Virginia scored two touchdowns 15 seconds apart in the third quarter to take a 27-14 lead, every TCU player was confronted with a temptation — not a satisfying one, but a natural one, something that comes very easily to the human organism: The temptation to lose heart.

Yes, players are taught to rage, rage against the dying of the light, but when adverse events keep piling up, it is easy for the human person — especially at age 19 or 20, especially on the road, especially in front of a hostile crowd, especially in nasty, uncomfortable weather conditions — to lose some energy and belief. TCU, the same team that blew a 21-point fourth-quarter lead at Baylor a few weeks ago, could have said, “Well, it just isn’t our day.”

Boykin, who had struggled so profoundly through three quarters, could have failed to find an answer in the fourth quarter.

The TCU defense which had forced so many turnovers but had also collapsed in the fourth quarter of that loss to Baylor could gave ceded psychological turf to West Virginia’s offensive line.

There were so many reasons for TCU to lose a bit of starch when it fell behind 13 and then by nine, 30-21, midway through the fourth quarter.

The Horned Frogs would have none of it. 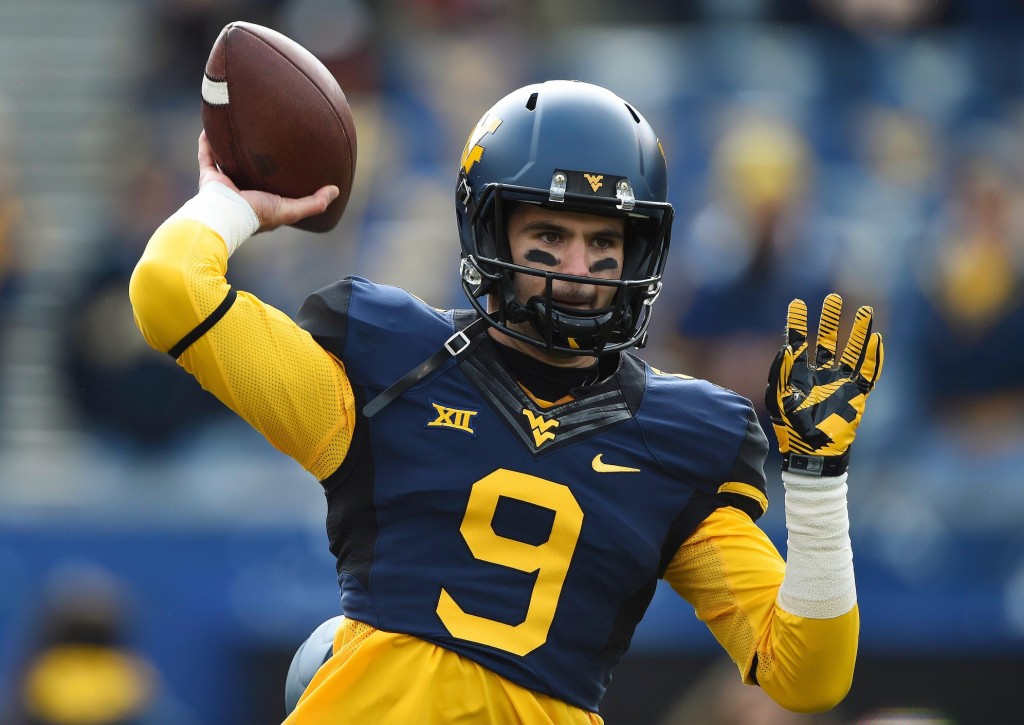 Clint Trickett, like Trevone Boykin, was not at his best on a Saturday marked by spotty performances under center. West Virginia’s turnovers didn’t usually turn into points, but TCU converted enough of them into scores to stay close, setting the stage for its fourth-quarter rally.

It’s a scenario we’ve seen before in college football this season: Missouri fell behind by two scores in the fourth quarter against South Carolina but — paradoxically — gained resolve instead of losing it, rallying for a win. (This scenario has been replicated several times during the course of the 2014 campaign.) Linear logic suggests that when a team is able to push its advantage from one score to two, it should gain strength. Sometimes, that will happen. However, in the fourth quarter of this Big 12 battle, TCU didn’t allow the scoreboard to shape its feelings or the way it attacked the game.

Boykin, in the dumps through most of the first three quarters, was helped along by running back B.J. Catalon, who collected 105 yards on Saturday. Boykin wasn’t having much of any success in the passing game, but his great virtue against West Virginia was that he didn’t insist on winning the game all by himself, especially with a balky arm that air-mailed a number of throws. Boykin found more running lanes in the fourth quarter. He didn’t remain wedded to the idea that he had to win the game in a certain fashion. He didn’t adhere to a foolish consistency, in much the same way a dumb baseball manager inserts a reliever only because it’s a certain inning, not because of the matchup with a hitter or the larger situation involved.

While Boykin remained patient, TCU’s defense — coached by coordinator Dick Bumpas — made amends for giving away a 58-44 lead in the fourth quarter of a stomach-punch 61-58 loss to Baylor. Whereas TCU couldn’t get a meaningful stop against the Bears in Waco, the Frogs grew in stature as the moment became more urgent in Morgantown. Yes, West Virginia head coach Dana Holgorsen was cautious to the point of excess, but TCU’s front seven still had to hold up under pressure, something that didn’t happen in Waco. TCU’s perseverance on both sides of the ball enabled this team to defeat a few very specific demons, not just the Mountaineers.

In that loss to Baylor, TCU appeared to have been jobbed by a defensive pass interference call which set up the winning score for the Bears. A TCU defensive back was doing nothing more than playing patty-cake with the Baylor receiver, but a flag was thrown. In this game (one in which West Virginia got the shaft on multiple non-calls of personal fouls), TCU’s players had to wonder why the fates were stacked against them. On a fourth and three from the WVU 43 with 3:46 left, Boykin had Catalon over the middle on a play that was probably going to gain at least 30 yards. Catalon was held (maybe behind the line of scrimmage), though, and the pass fell incomplete without a flag on the play. Regardless of whether the call was correct or not, TCU’s players probably recalled the memory of the Baylor game and lamented their situation.

Many young men would have given in.

TCU’s players continued the fight to the end. The Frogs got the extra defensive stop. Boykin hit one long pass to get his team into field goal range. That in itself represented a conquering of the Baylor ghost that loomed over this team.

Then, one specter still had to be chased away forever by the Frogs.

It was a ghost created on a chilly Thursday night in Salt Lake City in 2008, when TCU met Utah for the “BCS buster” spot in the Sugar Bowl against Alabama and a chance to gain national stature. Ross Evans had already missed a 26-yard field goal in the fourth quarter of a game TCU led, 10-6. Then, in this video, you’ll see what Evans did later on in the fourth quarter from 35 yards out, followed by what happened after that:

Though TCU settled for a field goal longer than a chip shot, Oberkrom — iced by Holgorsen — calmly booted the ball through the upright for a 31-30 win.

TCU has the Big 12 and a College Football Playoff spot to play for — that’s quite true. Yet, the next month will determine how the Horned Frogs fare in that regard. Next week against Kansas State is a battle that will shape the remainder of the Big 12 race (as will Baylor’s game against Oklahoma).

For now — for one day — TCU should simply sit back and savor its ability to wash away a number of very bitter memories, not just from a few weeks ago, but several years ago.  When a program crosses the thresholds (plural) the Horned Frogs managed to clear against West Virginia, a season rich in promise has the chance to become even more special. That’s where TCU finds itself on the first night of November.