With the college football season set to kick off on Wednesday night with Abilene Christian squaring off against Georgia State, it’s time for me to release my preseason poll. I will update these rankings each week as the season progresses, moving teams up and down according to what transpires on the gridiron.

When examining my poll, there are a couple of things to keep in mind:

Now that all of the disclaimers are out of the way, let’s unveil the initial rankings for the 2014-15 season.

1. Florida State – This one is a no-brainer. FSU returns 14 starters – including Heisman Trophy winner Jameis Winston – from last year’s national championship team that won its contests by an average of 39.5 points. Until someone steps up and beats them, the ‘Noles will remain in this spot.

2. Alabama – The last time a Nick Saban-coached Crimson Tide team closed the season with two straight losses, it rebounded by winning the national championship. The same thing could happen this year, as Alabama once again fields a top-10 defense and the most dangerous ground game in the country.

3. Ohio State – I’m sure many of you are thinking, “Does he know what Braxton Miller is out for the year?” Yes, I do, and as I wrote in a column shortly after it happened, history is full of teams that lost their QB early in the year that went on to have fine seasons. Paced by a much-improved defense, the Buckeyes will win the Big Ten title and earn a spot in the inaugural College Football Playoff.

4. Oregon – As the Pac-12 champions, the Ducks will grab the final spot in the field. With nine starters returning from an offense that scored 45.5 points per game last year, Oregon will be able to outscore anyone on its schedule. Unfortunately, UO won’t go undefeated, which is why it’s behind Ohio State.

5. Georgia – Under the leadership of new defensive coordinator Jeremy Pruitt, the UGA defense should be one of the best units in the country this year. That, combined with a return of Todd Gurley and a much-improved Hutson Mason under center, will land the Dawgs back to the SEC Championship Game. An upset over Alabama in Atlanta – which nearly happened in 2012 – would give Georgia a chance to play for its first crystal football since 1980.

6. UCLA – In just two seasons, Jim Mora has transformed the Bruins from an also-ran into a national championship contender. With the most experienced team in the Pac-12 returning, UCLA will capture the regular season crown with a home win over Oregon in October. However, a loss to the Ducks in the league championship game will keep the Bruins out of the College Football Playoff.

7. Michigan State – While everyone talks about how Ohio State hasn’t lost in the regular season under Urban Meyer, it’s important to note that the Spartans haven’t dropped a game since Connor Cook took over the starting spot at quarterback for good.* Couple that with another nasty Pat Narduzzi defense and it could add up to another B1G title.

* – Cook was benched late in the Notre Dame loss last season, so it was only after he regained the trust of the coaching staff that he became “the guy” under center. Since then, it’s entirely true that Michigan State has not lost.

8. Baylor – The Bears return seven starters from an explosive offense that led the nation in scoring last year. In addition, Baylor has one of the defensive lines in the country, and will again field one of the better units in the Big 12. While I expect Baylor to win its conference, I don’t see the Bears making the College Football Playoff because of their soft non-league slate.

9. Stanford – As long as David Shaw roams the sidelines, the Cardinal will be a top-10 team. Sure, Shaw will need to replace Shayne Skov, Trent Murphy, and Josh Mauro, but it’s worth noting that Stanford has finished no worse than 28th in total defense under Shaw’s watch. There’s no way to achieve that type of consistency without learning how to reload rather than rebuild. That’s why I’ve got the Trees in the top 10 again this year.

10. Auburn – Don’t let the lower ranking fool you: the Tigers are a team capable of winning the national championship in 2014. With a veteran offensive line returning, Auburn’s ground game will be able to move the ball at will against anyone. Unfortunately, the Tigers have road trips to Kansas State, Ole Miss, Georgia, and Alabama this year, making it highly unlikely that they’ll finish the season with fewer than two losses.

11. South Carolina – Defense wins championships, which is why many in the media picked the Gamecocks to win the SEC East this season. Ironically, the USC ‘D’ has been a model of consistency under offensive guru Steve Spurrier, ranking in the top 20 in total defense four of the last five years. They Gamecocks will crack the top 10 if they upset Auburn on Oct. 25.

12. Oklahoma – The Sooners looked like a championship-caliber team at the end of the season, thrashing Alabama 45-31 in the Sugar Bowl. OU should pick up right where it left off this fall, as the team welcomes back quarterback Trevor Knight and a veteran defense. If the Sooners can find some answers in the ground game (the leading returning rusher is tight end Blake Bell), there’s no reason why it couldn’t supplant Baylor as the top team in the Big 12.

13. Ole Miss – The Rebels are the true wildcard in the SEC West. Their highly rated recruiting class made an immediate impact last season, and will be even better this fall with a full year of experience. With a favorable schedule that includes both Alabama and Auburn at home, this is Ole Miss’ best chance to make it to the conference championship game since the league split into divisional play back in 1992. Ole Miss is the only SEC West school other than Texas A&M that has never made the SEC title game.

14. Washington – Make no mistake about it: Chris Petersen’s team can win the rugged Pac-12 North Division this season. Sure, the team lost its star players Keith Price and Bishop Sankey. However, receivers Jaydon Mickens and Kasen Williams return, as do all five starters from an offensive line that allowed UW to run for 5.1 yards per carry this season. If – and it’s a big if – Petersen can continue to work his magic at home (he compiled a 48-2 record on the Smurf Turf of Boise State), the Huskies would need only an upset of Oregon to capture the divisional crown.

15. LSU – The most overhyped story of the offseason is the quarterback battle at LSU. Regardless of who takes over for Zach Mettenberger, the offense will be fine behind a mammoth line that has 74 career starts. If the defense can find a way to stop the run in league play (4.5 yards per carry), the Tigers could return to the top 10 this season.

16. Wisconsin – Don’t let the inexperienced roster fool you: the Badgers are the team to beat in the Big Ten’s West Division. The offense will be more explosive this year with Melvin Gordon getting more touches and dual-threat signal caller Tanner McEvoy under center. If Wisconsin can find some answers on defense (just three return), this team could be a sleeper in the national championship race. However, since LSU hasn’t lost a non-conference regular season game since Les Miles took over, that doesn’t appear very likely.

17. Notre Dame – Here’s another team that could quietly crawl into the picture. With Everett Golson’s return and Malik Zaire’s emergence, the Irish will be able to run the type of offense it did back in 2012 when it played in the BCS National Championship Game. Similarly, new defensive coordinator Brian VanGorder will install a 4-3 system that’s better suited to Notre Dame’s personnel. How quickly the players adjust to the new schemes will determine whether the Irish play in New Year’s Day game or a “do drop in” bowl.

18. Texas – Throughout the offseason, all anyone wanted to talk about was who’s leaving the UT program. However, when doing the rankings, I looked at who’s entering the program this fall. Charlie Strong and Vance Bedford arrive from Louisville, where they coached a Cardinal defense that led the nation in total defense last year. Considering that they’re inheriting a very talented roster to work with, there’s no reason why the ‘Horns can’t field a top 20 unit this fall, which would put them right in the thick of the Big 12 race.

19. Clemson – Don’t fall into the trap of thinking that the Tigers won’t be any good on offense with the loss of Tajh Boyd, Roderick McDowell, and Sammy Watkins. As long as Chad Morris is calling the plays, Clemson will score plenty of points. On the other side of the ball, the Tiger defense will be one of the top units in the nation, anchored by All-American Vic Beasley. However, Clemson does play a tough schedule that includes games with Florida State, Georgia, and South Carolina. Unless it wins two out of three in that series, it won’t crack the top 15.

20. Louisville – Even though the Cardinals lose Teddy Bridgewater and many of their top defenders from a year ago, don’t expect much of a drop-off this year. Bobby Petrino knows how to coach up his players and will guide UL to at least nine wins again this season. 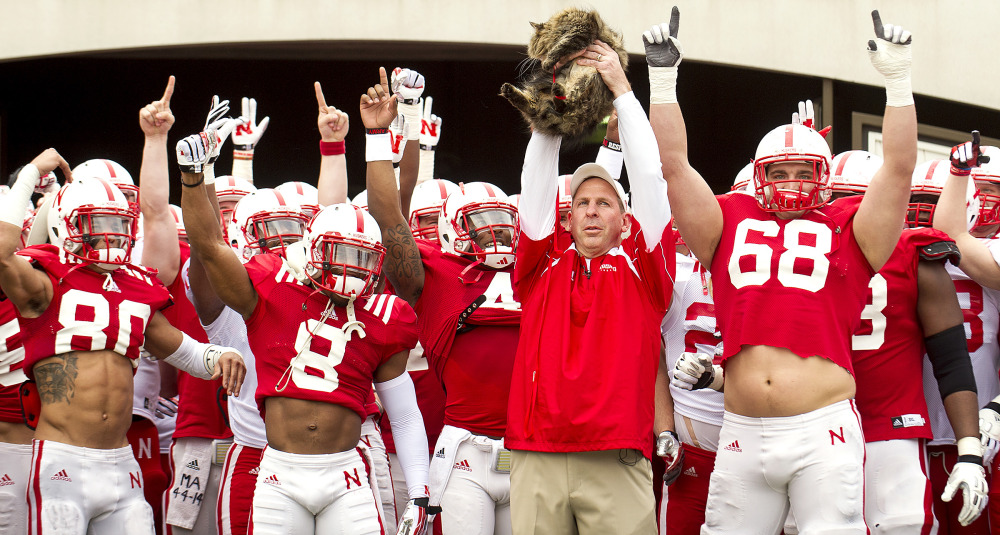 21. Nebraska – Despite playing without Taylor Martinez for most of the season, the Cornhuskers still managed to put together another respectable 9-4 mark under Bo Pelini. If they can pull off an upset late in the year at Camp Randall – in which the Huskers will have an extra week to prepare – the Huskers could wind up playing for the Big Ten title this season.

22. USC – Steve Sarkisian inherits 14 starters plus several other key contributors from a team that finished 6-1 over its final seven contests last season. Unfortunately, he also inherits a brutal schedule that includes Stanford, UCLA, and Notre Dame.

23. UCF – Even though Blake Bortles is now a Jacksonville Jaguar, I like the Golden Knights to repeat as AAC champs this year. After all, the defense remains practically intact, losing just two starters from a unit that held five teams to under 300 yards of total offense. The schedule also sets up nicely, as UCF does not play fellow top dog Cincinnati and draws Houston at home with extra time to prepare.

24. Miami – Regardless of who’s playing quarterback for the ‘Canes this fall, the offense will be just fine with a healthy Duke Johnson in the backfield. The schedule might be another issue, as Miami draws Louisville and Florida State from the Atlantic Division and plays Nebraska and Virginia Tech on the road. Unless they win three of those contests, the ‘Canes won’t crack the top 20.

25. Marshall – With Rakeem Cato under center and seven starters returning on defense, the Thundering Herd has an excellent chance to finish the season undefeated. However, since MU plays a pretty weak schedule, I can’t justify moving the Herd any higher than No. 25.