Most college football seasons involve an early-season game that becomes strange, aberrational to some degree, and ultimately misleading within the course of the season. No game in 2014 fits this description more than the Aug. 28 curtain-raiser between Texas A&M and South Carolina. The effects of this game on the reputation of Texas A&M in particular and the SEC West in general have shaped a lot of attitudes.

The basic question put before the editors at The Student Section: How much have these attitudes influenced the rankings? No matter what your own answer might be, this is one of the questions the College Football Playoff Selection Committee needs to wrestle with as the season continues.

Of all of the questions we’ve had this year, this one’s my favorite and I will admit to taking zero part in its creation. Not only is that inflated opinion of Texas A&M partially contributing to the perception of the Mississippi schools, it’s doing the same to Alabama.

Look, the SEC overall is outstanding, and because of the West, it’s the premier conference in the land so far this season. However, the perception of the SEC is the greatest Ponzi Scheme in sports, because if you rank half of the league’s teams by assuming they’re good whether you know it or not, even if they lose to the unranked SEC teams, that just means the unranked ones become ranked on account of “beating a powerhouse ranked SEC team.”

So you just shift the rankings because if Texas A&M is a top 5 team and the Aggies get destroyed, that must mean the unranked Mississippi State team is THAT good or whatever. The same goes for LSU this year. LSU is better than TAMU … which can’t plug a 2-millimeter hole in drywall at this point … but the Tigers are certainly not great. Yet, they get ranked highly, lose, and the SEC team they lose to assumes the position.

Then you go look at Alabama, who came into its game with TAMU not having defeated a ranked team in over a calendar year, and 0-3 in its last three contests against one. The Tide destroyed woeful TAMU and scooted up the rankings for beating a team that honestly doesn’t appear to be any better than a Washington State or an Iowa at this point.

Now, I’ll be honest … when asked this week who I thought looked like the best team in college football  to the eye, I said Ole Miss. So it’s certainly not meant to take away from what MSU or Ole Miss have done, but at face value, it’s basically this:

TAMU destroyed a South Carolina team that was mis-ranked in the top 15 to start the season, and shot up the polls. TAMU never slips in the polls in spite of finding out that South Carolina isn’t as originally advertised. TAMU starts getting destroyed, though, and all of a sudden it’s “Well, they’re top 10, so the teams they’re losing to must be THAT good.” There’s never any thought or imagination that maybe TAMU was mis-ranked based on the danger of ranking teams before the season starts… a ranking based on nothing, really.

Like I said, the best Ponzi Scheme in sports.

When I first saw this question, I thought, “Surely, you can’t be serious.”

I’m sure you all know how Matt and Bart responded.

All kidding aside, this question sells the Mississippi schools VERY SHORT. Mississippi State and Ole Miss aren’t ranked 1 and 3 in the polls because they both own a win over Texas A&M. They’re up there because of their respective victories over Auburn and Alabama, which have combined to capture four of the last five conference championships, and played in the last five BCS National Championship Games.

In other words: it’s very difficult to argue that beating Alabama or Auburn this year isn’t a very significant feat. Aside from Arizona’s win over Oregon, Mississippi State and Ole Miss have recorded the two biggest wins of the season.

That, my friends, more than warrants a top three ranking. 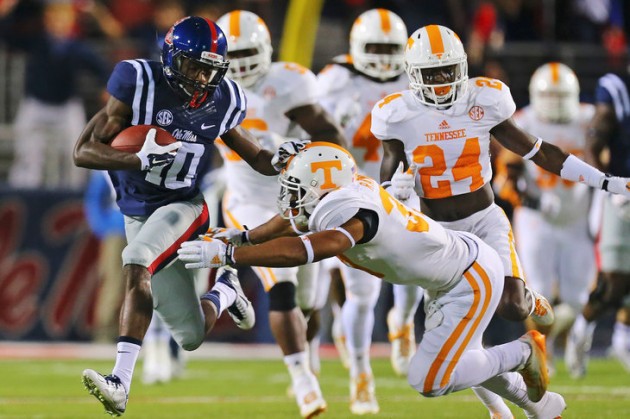 Given the way Ole Miss has so thoroughly smothered opponents such as Tennessee (this past Saturday), it’s more than legitimate to say that the Rebels’ place in the top five should not be linked at all to “the Texas A&M factor.”

For readers who are new to The Student Section, it was a personal policy of mine in 13 seasons at College Football News, especially in the latter half of my tenure there, to not say much about the Heisman or the polls until November.

It’s one of the structural problems with college football punditry and editorial commentary in general: There’s such a built-in desire to tell people where the bowls/playoffs/Heisman contenders stand after each week of the season, but in September and October, teams’ identities are unknown. What FEELS like a highly significant moment in week one often turns into a non-event by the time we get to November. Another result might seem very insignificant in September but become highly important in November.

Common sense, of course, should lead pundits and pollsters to not worry about ranking the best teams in the nation until the second week of November. This is, after all, why the CFB Playoff Selection Committee hasn’t released a poll to this point. Yet, plenty of outlets publish bowl projections in September and “College Football Playoff teams if the season ended today” pieces in early October. What you get when you commit to publishing those kinds of pieces early in the season is a markedly premature — and therefore incomplete — reading of the teams, which creates an initial perception in September and October that will differ from the reality of a more solidified situation in November.

No team in the United States embodies this problem with the college football publishing industry more than Texas A&M, for reasons Bart articulated above. 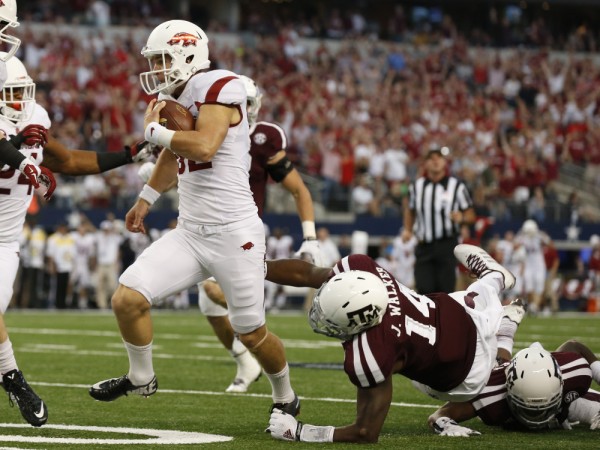 Texas A&M-South Carolina was the main thought-influencing game from the first five weeks of the season, but don’t forget how much the Arkansas-A&M game seemed to reinforce perceptions about the SEC West’s depth. What once looked like a division with seven genuinely solid squads has turned into a four-team division, with LSU getting its chance to announce itself as “quality team No. 5” this Saturday against Ole Miss. The SEC, as far as the College Football Playoff is concerned, would love to see LSU play really well… and for Ole Miss to surmount the challenge posed by the Bayou Bengals.

I would only add this to Bart’s entirely on-point answer: The Texas A&M-Arkansas game, not just A&M-South Carolina, did a lot to create the perception Arkansas had arrived as a pretty solid team in an “uber-SEC West.” Aggies-Hogs did a lot to fuel the idea that the SEC West had seven legitimate teams, with not a single weak sister in the bunch. We can now see with overwhelming clarity that while LSU is improving, A&M and Arkansas are below-average teams, period. This is why any responsible college football pundit/voter/playoff selector has to keep September and October results at arm’s length and not give too much (premature) weight to any single game outcome until the middle of November, which is when a very public process of vetting and examination should occur with public ballots for all committee members.

I’m almost done answering this question. Just one final word: One can note the centrality of teams such as Texas A&M in creating inflated and artificial assessments of the Mississippi schools and yet still end up with Terry’s bottom-line answer as well: The Bulldogs and Rebels both deserve to be where they are. The team that doesn’t yet deserve to be in the top five for many of the reasons discussed above: Alabama.

The answer, then, is like many midseason college football answers: It’s complicated in nature, and the ultimate answer is “both” more than one extreme or the other.