(This sounds like something the late, great Beano Cook would write, doesn’t it?)

In this discussion of the 2014 Heisman race, Bart explains his Winston choice, and TSS editor Matt Zemek then weighs in with his thoughts on the components of a Heisman winner:

Probably the biggest narrative of the 2014 Heisman Trophy race is how little people talked about it with all this playoff hullabaloo going down. It used to be the Stiff Arm Trophy was the subject of weekly obsession, way-too-early rankings, and sleeper columns by the week.

I can’t say I missed self-aggrandizing pieces like: Heisman Trophy Candidates You Don’t Know or Mid Major Heisman Candidates You Should Be Watching. But all the same, it’s the singularly most identifiable individual award in sport, and to see how easily it was pushed to the back burner was galling, especially when there were no really runaway candidates and that left a potential back-to-back winner hanging around in Jameis Winston.

In the end, it’ll end up being Marcus Mariota even though I personally think it should be Winston. But the reality with anything that involves people voting is that their own personal biases are destined to be a part of the process. You can’t avoid bias no matter how hard you try to suggest to people that you’re the one person on the globe that can.

Much like with Johnny Manziel, people at one point decided they didn’t like Winston and if he put up identical stats to last year, he’d still not have won it. That said, if you gave every voter, coach, or fan a shot of truth serum or at least a pint of Dark Eyes and told them to pick one guy to win you a game for a title at the quarterback position and your opponent gets the second pick, Winston’s either being picked because you believe in him as that guy or are terrified the other guy will pick him and you’re screwed.

Flashy stats and numbers don’t do much for me, which is what makes voting fascinating on any level: each voter has a specific set of personal criteria they’re worried about. Especially when it comes to politics. Some vote on foreign policy, health care, something that’s more specific to them personally, etc., and we rank what’s most important to us, what’s not as important, and then see how the candidates line up.

To me, getting it done when it absolutely has to be done is a trait far more rare than being able to run up stats or avoid mistakes. So that’s how I’d go with it: Jameis Winston.

It’s honestly too bad the Heisman Trophy was snuffed from our day-to-day college football limelight, because this really was a comeback year for the award which has too often just felt like an extension of the Davey O’Brien award the last several years. This year, you had a compelling candidate from both the wide receiver and the running back positions that realistically could have won.

Maybe as we get more used to this playoff stuff, we’ll pay more attention to our old Stiff Armed pal, but for one year, it was out of sight, out of mind, and eventually, in Eugene, Ore. 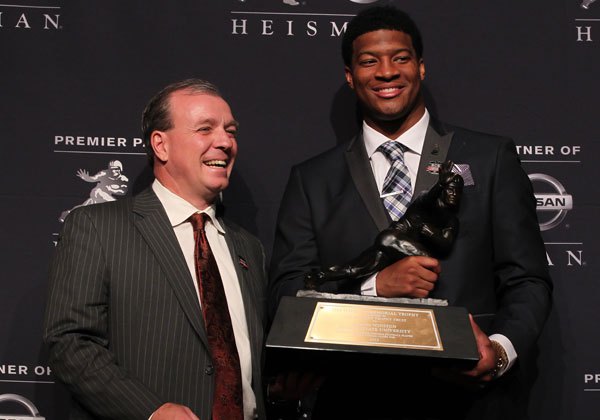 Jameis Winston is, indisputably, the best crunch-time player in college football. Is that a valid reason for claiming he should be the 2014 Heisman Trophy winner? Yes… and therein lies the source of an important discussion about this prestigious individual award.

Earlier this week, the Heisman forecasting website, Stiff Arm Trophy, closed up shop after 12 years of accurately predicting the winner of the award. Cause of death? The Heisman Trust’s insistence on non-disclosure of votes prior to the ceremony.

The College Football Playoff’s final votes were not made public.

The Coaches’ Poll votes aren’t made public until after the final full weekend of play, giving journalists and fans no chance to create a course correction during the flow of the season.

The College Football Playoff also foisted concepts such as “game control” on the public without ever discussing them or allowing them to be vetted before the season. There was no public agreement on how strength of schedule should be measured — not before the 2014 season began, at any rate. There was no specific order of priority in which the playoff committee’s central criteria were supposed to be honored.

Everything in college football is vague enough or secretive enough that a wide range of opinions are valid… and everyone winds up arguing about them. Every debate — the playoff, the bowl matchups, the way a conference title is decided, and yes, the Heisman Trophy — lacks enough ground rules and specific provisions for a clear and unifying verdict. For some, this is a feature of college football. For others, it’s a bug. For some, this is one of the sport’s enduring charms. For others, this is one of the sport’s biggest and most unceasing frustrations.

It’s very much at work in the Heisman Trophy — not especially this year, but on a general level.

Here is the first part of the Heisman Trust’s mission statement, ostensibly the basis for choosing the winner of the award:

That’s a nice-sounding mission statement, but in terms of specific criteria, there’s no “there” there. This is why my colleague Bart Doan stands on absolutely solid ground in picking Jameis Winston as the winner.

Diligence? Perseverance? Hard work? Great ability? Winston’s batting 4-for-4 there. If Bart wants to use “Who would I want with the ball when the game’s on the line?” as his central metric:

A) there’s nothing in the rules preventing him from doing so;

B) there’s absolutely NOTHING invalid or illegitimate about taking that stance.

Much like the College Football Playoff, the Heisman Trophy can use a little more specificity, so that we can move past the “argument culture” that is so deeply ingrained into the sport.

Let’s not claim that if more criteria (and more specific requirements) were introduced into various competitions, there would be nothing left to argue about in college football. We would be able to refine our arguments on the agreed-upon categories or measurements of quality. It’s shortsighted to think that more criteria will remove drama from the equation. There’s still plenty of critical thinking to be done in Heisman races and playoff chases; what we need are clearer ground rules so that everyone’s standing on the same terrain in a given debate.

College football’s large and persistent problem remains this: It would rather have people argue on different pieces of turf, rather than define the terms of debate in the pursuit of clarity — not agreement, mind you, but clarity.

Here’s the essential question raised by Bart’s Winston vote and his eloquent defense of it above:

When do statistics cease to be meaningful in football, and in sports on a general level?

That is one of the most important Heisman Trophy questions one can ask.

Plenty of quarterbacks will rack up passing yards when trailing by 14 points in fourth quarters. Plenty of wide receivers will accordingly accumulate receiving yards in similar scoreboard situations. Some running backs (Melvin Gordon and Tevin Coleman) will post big numbers without quality quarterbacks to help them. Others will benefit from the presence of a strong passing game, but won’t have the same statistical heft on their season-long totals. The value of a yard and a touchdown, and the negative value of a turnover, are different in each sitaution.

As Bart said, everyone’s going to have his or her own parameters and points of emphasis for the award. In the absence of more precise criteria, how can anyone find fault with a specific line of analysis? 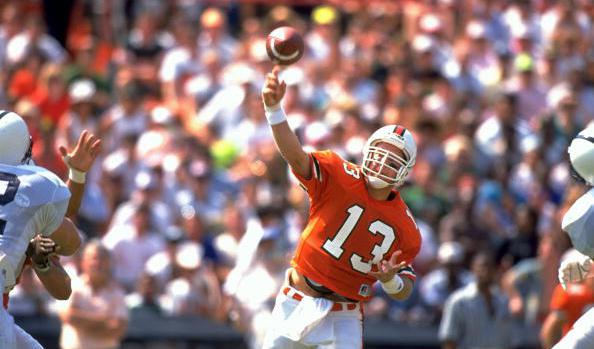 If you’re still critical of Bart’s Winston vote, do recall this: Geno Torretta won the Heisman in 1992. He always answered the bell when his team needed him to do so — that’s Bart’s criterion, elevated to the top of the ladder in terms of importance in a nationwide Heisman vote. Eric Crouch in 2001 (though losing once, to Colorado, in that regular season) was another player who similarly responded consistently in put-up-or-shut-up moments, much as Winston has.

The Heisman Trophy accommodates a wide range of views and perspectives. The same is true for college football.

If you don’t like the way someone votes, though, don’t blame the voter for being reasonable — blame the lack of specific criteria, the true source of confusion and frustration for college football fans… pretty much since Walter Camp began to give definition to the modern game in the 1890s at Yale.