Christmas is — within the Christian tradition — a deeply holy day. Whether you are of a religious persuasion or not, you can appreciate that there’s something very sacred about that day, something which ought to make the day a time for simply “being,” not doing; for quiet, not the hustle and bustle of the weeks which led up to it.

Thanksgiving Day has, within American culture, become a very similar day. It’s a time to gather loved ones in the home, to sit at table and share the bounty that has been bestowed upon us — a bounty we’ve worked to provide for each other, but a bounty we’ve been blessed with. Thanksgiving has in some ways become the best portal through which religious values can be expressed without ideological tensions.

There’s no “War On Thanksgiving.” It’s the holiday which just is. It’s not marked by any sort of political crossfire. Thank God for that (if you believe in God, of course).

There is, however, one thing about Thanksgiving which separates it from Christmas in a particular way: There’s always a Friday after the big day, a Friday which creates an extended weekend, a Friday which occurs within the college football regular season.

The wisdom of the ages — not necessarily religious wisdom, but the wisdom of living a balanced human life (though the two often cross paths for those who hold a religious faith) — tells us that we shouldn’t be on the go all the time. We shouldn’t feel that after one day, we have to restart the engines and scramble to do things. Lying fallow, allowing oneself not just the pleasure, but the occasional necessity of doing nothing — quieting body and mind — is a part of an evolved perspective.

For those of us who cover college football, it must be conceded that Thanksgiving Friday is work. It is a restarting of the engines and part of the mad dash of effort which characterizes this part of the year. Preaching against overwork or a hyperactive lifestyle can seem disingenuous in this regard.

Thanksgiving Friday football doesn’t interrupt the 2 p.m. turkey dinner on Thursday afternoon; the singing of hymns with grateful praise; or the very conscious act of gathering together to ask for blessing. The Friday after Thanksgiving Day is meant for rest and recreation, for eating turkey sandwiches with cranberry sauce and other leftovers. It’s a day when hard-working Americans can just be, and don’t have to do.

It’s a day when five-star football games — at least one or two — ought to be available on network television. That’s not the current reality we have in college football.

This might be an insignificant detail to some, but “Hail Flutie” occurred on Thanksgiving Friday.

Back in 1984, college football had not yet burst into the ESPN era. The landmark United States Supreme Court ruling which would forever change the identity of college football on television had just been handed down. In 1984, American sports were still primarily consumed on television through the three main broadcast networks. If you weren’t on CBS, NBC or ABC, you didn’t (yet) matter.

With fans being much more tethered to their local games of interest — since national TV viewing consisted of just a handful of games at the time — a typical college football Saturday in 1984 invited a conflict for Americans: Watch your own team’s game in the stands, or — on the other hand — stay home and watch the national games on the networks.

Today, fans get to see every game of consequence on television if they want to, which is part of why game attendance has declined and writers tweet photos of sparsely-filled stands 15 minutes before kickoff. If you’re suffering in this economy, though, and you want to watch as much college football as possible, you’re probably staying home instead of buying a ticket. Such was not the case in 1984.

Where does Thanksgiving Friday fit into this larger picture? It’s quite simple.

By avoiding the Saturday schedule, Thanksgiving Friday games — especially in the 1980s, before college football consumers got used to saturation coverage on a day-long basis from ESPN — rescued fans from facing that conflict between seeing their local team in the stadium or the huge national game on the tube. Thanksgiving Friday clashes solved a huge problem for college football fans. They removed tough choices for at least some teams’ fan bases. They enabled players and rivalries to acquire the spotlights they deserved.

Plainly put, Boston College-Miami — on Thanksgiving Friday of 1984 — was magnified by its place on Friday. Had it been one of many games on Saturday, it still would have created a sensation and still would have lifted Doug Flutie to the Heisman, but it might not have become iconic on such an enduring scale. The stand-alone Friday showcase added to its legend and its place in the collective sports memory of Americans. 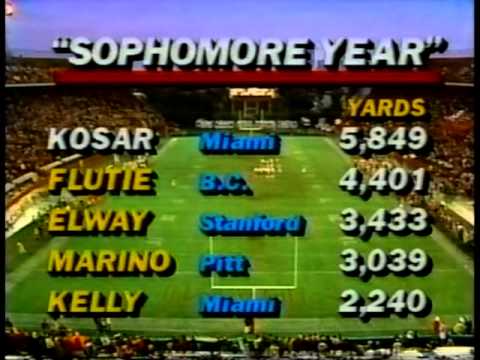 We remember that CBS broadcast of Boston College-Miami from 1984 mostly because of the epic game and its classic ending. We also remember it so vividly because it occurred on Thanksgiving Friday, without competition from a full slate of other highly important college football games, most of them in rivalries which commanded the attention of local fan bases.

In subsequent years, you will recall the presence of certain rivalry games on Thanksgiving Friday:

Auburn-Alabama — not regularly, but once in a while, and especially in 2010.

You’ll recall how amazing Thanksgiving Friday turned out to be in 2010, when Cam Newton’s unforgettable Iron Bowl comeback was matched by Nevada’s amazing rally against Boise State… and Kyle Brotzman’s haunting miss of a chip-shot field goal that could have catapulted one of the sport’s “little guys” into a prestigious January bowl game.

College football — like leftover turkey and stuffing — just tastes a lot better when it is hot on the Friday after Thanksgiving, instead of being served cold. This year’s slate is moderately interesting, and the mid-afternoon window will genuinely hold the interest of the diehard fan. However, there’s no “Nebraska-Colorado 2001” or “Texas-Texas A&M 2005,” a game that carried the weight of the season on its shoulders.

As we celebrate the 30th anniversary of Hail Flutie — 30 years since that Thanksgiving Friday in 1984 — college football is reminded that while Thanksgiving Day should be given over to thanksgiving and nothing but (the same being true for Christmas), the Friday on this holiday weekend ought to be a time to showcase the very best in the sport.

There is a part of us which knows that the only chasing around which should occur on Thanksgiving Friday should not occur on a road, in a parking lot, or at a store’s front entrance. The chasing on this unique day should take place in a touch football game with our siblings and children… or on a screen while we munch on sandwiches with people we care about, taking in some of the showcase events of a college football season.