Question No. 1: The Big 12 doesn’t play a conference title game this Saturday. How do you think this reality WILL affect the conference?

The answer: John Blutarsky’s grade point average and the effect that not having a conference championship game will have on the Big 12 this Saturday.

Let’s be honest, the Big 12 is in a pretty good position without a conference championship game. After all, the league still has a marquee matchup in Kansas State – Baylor on Saturday evening. However, the Big 12 is actually a more wide-open race than any of the others, because as many as three teams could win the title depending on what happens earlier in the day. That means that viewers across the country have to stay tuned all day long to find out who’s going to win, rather than waiting for the “one-and-done” dynamic the championship games offer.

What impact will that have on the conference getting in the College Football Playoff? It’s tough to say until this weekend’s action unfolds.

I suppose I’m in a holding pattern with this one because after Saturday’s events, it depends a lot on what everyone else does. The fact of the matter is, we’re looking at four teams being in. The answer to this question varies by year.

Would it help THIS year? Absolutely, because as opposed to every other conference, you’d have two 1-loss teams matching up where either winner strengthens its playoff case. That’s a sharp contrast to the SEC, ACC, Big Ten, and Pac-12 title games, which feature teams in the playoff chase against those who probably aren’t.

The committee has acknowledged that these conference title games are a big deal in the thought process though, so I guess I punt this answer away and say that it’s a problem for the Big 12 in the sense that the right people don’t seem to care if the conference has a legit way of crowning a champion, just if they have some extra dog and pony act to verify it.

This might seem like a non-answer, but it’s merely an honest statement of where my mind is, and where it’s been all season long: I do not know how the committee will ultimately act and choose on Selection Sunday.

The reality of conference champions being officially crowned could create a shift in the committee’s rankings and thought processes that — until now — has not had a chance to be revealed. It could be that December 7 will bring us all sorts of surprises. Therefore, strictly in terms of predicting what WILL actually happen, my only honest answer is to say I have no idea. What SHOULD happen? That’s another issue altogether, and it will be dealt with in the next question below. 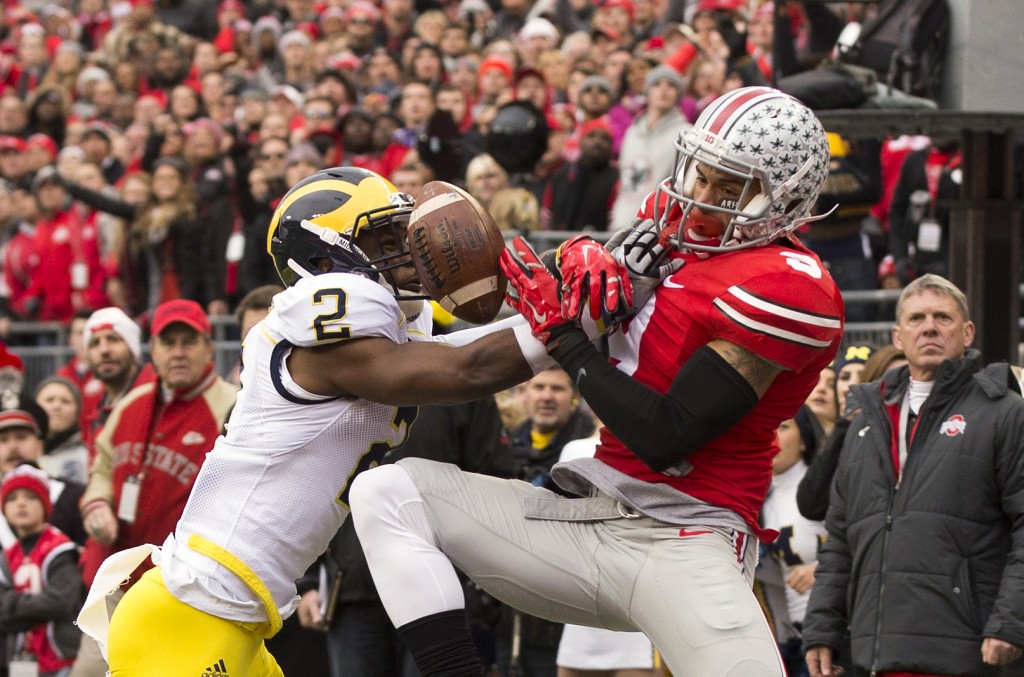 If the conferences are given autonomy in their ability to stage championship games, we could see the end of split-division conferences. We could also see conferences decide to make the conference title game a flex-game entity in which the conference champion might not play in it. For instance, the Big Ten could have chosen this year (under a liberalized structure) to anoint Ohio State as its champion. The conference title game slot this Saturday could have beloned to Michigan State and Wisconsin, the second- and third-place teams. Ohio State would love the ability to rest and heal for the bowls. Michigan State and Wisconsin could gain a quality win. Shouldn’t conferences have the freedom to be able to do this? They might… if legislation makes its way through an NCAA board in April.

Question No. 2: The Big 12 doesn’t play a conference title game this Saturday. How do you think this SHOULD affect the conference, and how should college football respond to the fact that the power conferences have imbalanced systems in general (some with eight games, some with nine, the Big 12 playing round-robin, etc.)?

It’s college football’s great unresolved issue: How should the sport deal with the different methods the power conferences use to schedule games and then crown champions?

The key detail in the Big 12’s schedule is not that it doesn’t play a conference title game, but that it plays a round-robin schedule. Everyone plays everyone else. That’s the best way to decide a champion, whereas in the other four power conferences, a size of either 12 or 14 teams prevents everyone from playing each other, necessitating a conference title game. The Big 12, with 10 teams, doesn’t need a league title game, so this should not (repeat, SHOULD not — I have no idea whether it WILL or WILL NOT) affect the conference. If the Kansas State-Baylor result somehow acquires less importance than the Ohio State-Wisconsin result, just because one game was not a league title tilt and the other one was, that wouldn’t be right. It also wouldn’t make sense.

The larger question of how to address imbalanced structures is what the sport really needs to address. Given that there will be several very important unplayed conference matchups per season, college football should strive to fix this specific problem. In the Pac-12, for instance, Oregon and Arizona State never played. In the Big Ten, Michigan State and Wisconsin did not play. When these schedule gaps exist, the sport can act to make this upcoming final Saturday of the season a bigger day.

While the Big Ten plays its conference championship game with Wisconsin and Ohio State, and while the Pac-12 pits Oregon and Arizona against each other, why not have the other teams in the College Football Playoff top 24 (make it an even number divisible by four) play 13th games to earn their way in or play their way out of a big bowl?

As another suggestion, if one team cleanly and clearly shows that it’s the best in its conference during the 12-game season, don’t play a traditional conference title game in game No. 13. Maybe have the second- and third-place teams in a conference occupy the title game spot to perhaps decide a second playoff team from that conference. In the Big Ten, have Wisconsin play Michigan State and call Ohio State the conference champion, since it didn’t lose a game in the league over the course of the regularly-scheduled 12-game season.

In future years, college football could slide the schedule up one week and leave the first Saturday of December available for a Big 12 team to play (let’s say) the SEC or Pac-12 No. 2 in a game with playoff implications. Television networks would love to carry those kinds of games. They’d be ratings bonanzas.

Think this is pie-in-the-sky stuff? It’s actually quite possible. Jon Solomon of CBS Sports wrote this must-read story on legislation being sought by the Big 12 and ACC, pushing for conference autonomy over league championship games. The rules requiring two divisions, a minimum of 12 teams in a conference, and round-robin divisional play as prerequisites for a conference championship game are under assault. If the conferences have any imagination, they could soon be free to explore the alternatives mentioned above. That would make college football a massively improved product on the field.

I’m probably in the minority here, but I’m a simple person who likes simple answers to what really are simple questions. I like the Big 12’s round robin format because you get the feeling coming away from it that barring DOOM (which we have seen with the Texas-Texas Tech-Oklahoma fiasco in 2008), you know who the best team in the conference is.

For those that live and die by the conference championship route, look at what we have going on in the SEC, which happens seemingly every year somewhere: one division has an inferior champion versus a champion from a stronger division. 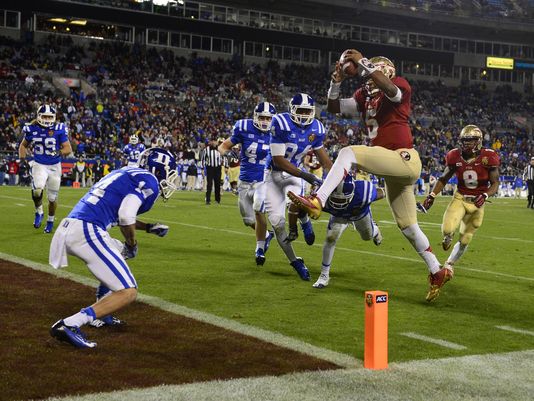 Last year, an imbalanced conference championship game matchup emerged in the ACC. Duke didn’t have to play Clemson or Florida State during the 12-game regular season. Being slotted in the Coastal Division and not the Atlantic enabled Duke to win a division title, helped by the favorable crossover schedule in the ACC. At least once a year, there’s an imbalanced conference title game as a result of the divisional structure. This year’s foremost example is Missouri-Alabama in the SEC.

If the Big 12 feels its format is keeping it from getting the necessary pub that all-important last weekend to make an impression, it could always go with a flex schedule that leaves an open date for the conference teams the last weekend of the season and have teams play one another based on their standing.

At that point, you’d just shave off one of the out-of-conference tilts to make for this “flex” game and rotate who gets the home games by year. The other benefit to that line of thinking is you can get a couple of five-win teams playing one another and guarantee an extra bowl bid for the conference.

Short of that, I think college football should move to four huge conferences, 1-2 out of conference games per year, a mandated conference championship game that acts as a default playoff quarterfinal, and then the four conference champs play in a “Four Team Playoff.”

I think at that point, every corner of the nation is represented accordingly, and the bitching would mostly cease, at least as much as is reasonably possible.

The lack of a conference title game should not count against the Big 12 in the College Football Playoff. By utilizing the round robin format, everyone plays everyone, which creates an environment where every single game counts. The same is not true of conference championship games, which allow an opponent to avenge a loss suffered earlier in the season. While I hate to use the word meaningless when talking about college football, the existence of league title games effectively does exactly that, in that only the result of the second game carries any weight.

Wasn’t that the purpose of the BCS (and the College Football Playoff for that matter)?

To answer the second question as to how the Selection Committee should deal with the different league schedule formats the answer is simple: make strength of schedule the most important criterion when picking the teams for the field. This approach would force college football’s top contenders to meet more often during the regular season and hopefully help sort out the issue of who the four best teams are on the gridiron – where it belongs.