Rivalry Week is a few weeks away in college football, but “Scenario Week” is here. After the six top-25 games of Nov. 8 sorted out a lot of issues in college football but created several new problems, it’s necessary to deal with various scenarios one by one.

A particularly interesting hypothetical — one which could very realistically emerge — is if the Big 12 and SEC West produce 11-1 teams. The Student Section editors are on the case:

If TCU and Baylor both finish 11-1 and the SEC West No. 2 also finishes 11-1 (with no SEC Championship Game), which team should get the nod and why?

The only way that this could happen is if Alabama beats Mississippi State this weekend. That would give both squads an 11-1 mark.

Assuming this happens, I firmly believe that the Selection Committee will take the SEC West runner-up over the Big 12 champion. While I don’t agree with them, Jeff Long’s comments earlier this week suggest that the committee has no problem placing a second-place team in front a of a league champion. Here’s the video of Long’s comments:

Just for the record, I’m not saying this is what the Selection Committee should do. While everyone at the four-letter network absolutely idolizes the SEC West, it’s worth noting that the Big 12 is as deep as any league in the country. If the teams currently in the middle of the league standings can challenge Florida State and Alabama, it’s not a stretch to think that the eventual conference champion could actually beat these two squads at a neutral site. After all, the runner-up had no trouble doing so in the Sugar Bowl last season.

Let’s hope the committee does the right thing by rewarding a team that won a conference championship rather than a giving a “do-over” to a team that didn’t.

I can’t entertain the thought of a two-loss SEC West team getting in over a 1-loss Big 12 champ. If that happens … and I don’t think the committee is either drunk enough or stupid enough to do so … I might be done with college football, because at that point it’s nothing more than a sham where the teams are decided before the games really are played.

How much does this argument change if the SEC West’s second-best team has only one loss? Not much.

Look, the Big 12 is a damn good football conference. Don’t give me sass about score numbers. Wins are wins. Just ask Saint Nick Saban. I’d say “They don’t give ya extra points for how you get them,” but in college football, it’s a lie.

TCU and Baylor’s resumes stack up just fine to whatever SEC West No. 2 might present itself as worthy of discussion. Let’s say Baylor wins out. The Bears would have defeated TCU and possibly handed the Frogs their only loss. They’d have pasted Oklahoma, and their only loss would have been on the road to West Virginia.

Now, TCU … its only loss would have been by three at Baylor in a game the Frogs led almost the entire way, and were a jog to the mailbox away from sealing.

I don’t know any other way to put it other than it’d be a complete farce if a Big 12 champ was left out for No. 2 in the SEC: if you continue to accumulate enough of that crap, basically, people will slowly stop watching. There’s only so much BS that can be pulled over on the consumers before they check out. Unless it involves gasoline/big oil. They can do whatever they want. 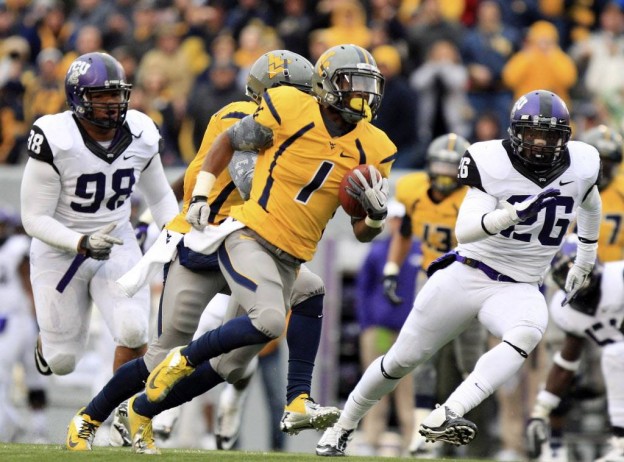 TCU and West Virginia being so much better this year than last year helps illustrate why the Big 12 should enjoy a lot more leverage than it did in last year’s final BCS discussion. The Big 12 declined in 2013 relative to 2012. However, it has just as surely risen in 2014 compared to 2013. Flat assessments of conferences — presuming that conference strength, once evident in a given season, should always exist in subsequent seasons — are supremely harmful to the evaluation process. Every season has to be judged on its own terms.

Last year, the Big 12 was clearly down relative to 2012, with the likes of West Virginia and Kansas State taking some hits. Baylor won the conference but did so without securing a big non-conference pelt. It was just a down year, and Big 12 fans didn’t like hearing that.

However, this year’s very much the opposite.

It just so happens to be that the Big 12 is a lot better this year. One year’s fall is often followed by the next year’s rise. It’s the cycle of life in college sports or in anything else under the sun. West Virginia is solid, though not as imposing as it was a couple of weeks ago. Kansas State is a high-quality team. So is TCU (another team that wasn’t good last season, detracting from the 2013 version of the Big 12). Baylor is strong for a second straight season. Oklahoma has taken some bad hits the past few weeks, but the Sooners weren’t that special at this point last season (they turned on the jets in the final three weeks). Overall, the Big 12 is substantially better compared to last season. That’s obvious. SEC fans have to concede that point.

The real question here is the SEC West. We still don’t know how good this division is, and we’ll need to continue to evaluate it through Thanksgiving weekend.

Will Auburn clean things up against Georgia?

Will Mississippi State and Alabama play a good game… something Alabama and LSU failed to do on Saturday? That was a poorly-played contest in Baton Rouge, period.

Will Ole Miss be able to stabilize following the heartbreaking Laquon Treadwell injury?

Will LSU beat Arkansas this weekend, something Vegas doesn’t think will happen?

Will Texas A&M decide to play well for the rest of the season, or will that Auburn game be an aberration, thereby reflecting poorly on the SEC West?

Then, of course, how will the Iron Bowl and the Egg Bowl pan out a few weeks later?

Let’s be open to new information, but let’s realize that the Big 12 has proved a lot more to this point. The SEC West will get a few more chances to reshape this argument, but it is running out of opportunities to impress.