Alabama didn’t need a conference championship to play for the national title in the 2011 college football season.

Florida could have benefited from a four-team playoff format in the 2012 season.

The 2013 Alabama squad could have similarly profited from a final foursome.

Southeastern Conference teams are never out of sight or out of mind when strength-of-schedule and conference-championship discussions unfold.

The Student Section’s editors initiate their first roundtable, The Editorial Section, by diving into the SOS-versus-conference title debate.

THE QUESTION BEFORE THE PANEL:

According to a document obtained by USA Today, the College Football Playoff Selection Committee should consider seasons in this manner: “Strength of schedule, head-to-head competition and championships won must be specifically applied as tie-breakers between teams that look similar.” Which is more important: playing a stronger schedule or winning a conference championship?

Yet, with that having been said, strength of schedule is the greater need, at least in the first year of the College Football Playoff.

Conferences would do well to flex-schedule one league game per season, pre-determining the date but waiting until midseason to name the opponent, based on results. Within such an approach, more of the top teams could play each other. In the absence of this and similar reforms, though, the expanded size of most power conferences (the Big 12 being the conspicuous exception) magnifies the schedule imbalances that pervade the sport within a conference structure. This doesn’t even touch on non-conference games.

As long as conferences fail to do as much as they can to create more balanced schedules, non-conference games remain the most available way in which to separate the top four teams in the nation from everyone else. The schedules are already set for 2014, but not for future years. If the playoff committee is going to send one and only one message with its playoff selections this season, it HAS to be that the strength of schedule matters more than anything else.

Consider college basketball: SMU was punished for its weak non-conference schedule this past season. The basketball selection committee is and has been consistent in whacking teams for going the cupcake route. If the football selection committee can display the same kind (and level) of rigor, you’ll see fewer non-con cupcakes and more TV-friendly blockbusters. This is clearly where the sport ought to go.

Strength of Schedule (SOS) is to college football what “Remember what you and your buddies did at the club 10 years ago? I haven’t forgotten” is to a woman’s argument platform. Neither will just go away and both eventually should.

“SOS” goes off the rails when you start tabulating in the records of who played whom when those teams have zero bearing on the quality of the team they’re affecting. Consider it the “Five Degrees of Separation” sports style.

All SOS is useful for is to provide a statistical crutch for avoiding what Matt up there is referencing: better actual scheduling… which is easily possible. Heck, even flex scheduling within conferences would work for me, so we don’t have massive conferences with elite teams conveniently avoiding one another. It might make logistics easier.

All we keep hearing about in college football is how everyone needs to get closer to whatever they think is a “true” national champion (hint: the NCAA recognizes nothing of the sort in football), but all we get every year are more flaccid weekends and added rules empowering the scheduling of FCS squads. Times were, one FCS game every three years could count to bowl eligibility. Now you get one per year AND can play another.

Conference championships have none of the sort.

College football isn’t set up to know anything about the teams unless they play one another. Let’s not act like it is. There are lies, damn lies, and statistics, the worst of all. SOS is a statistic. Conference champs are not. 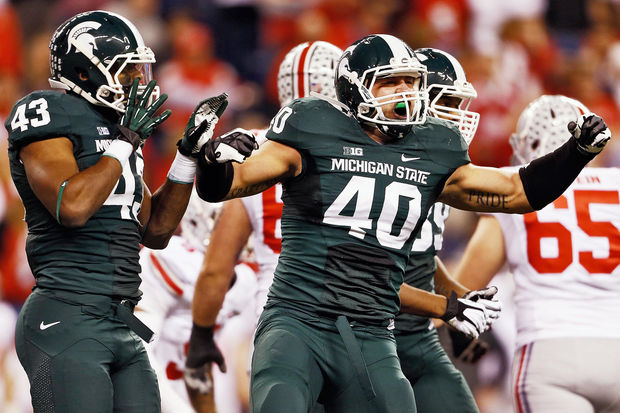 Michigan State might very well have been the conference champion left out of a four-team playoff had the format existed last season. Either Michigan State or Stanford would have been on the outside of the candy store, and that concern about the value of conference championships is something that has to be kept firmly in mind during this debate. Even if you think strength of schedule is more important than a conference title for purposes of playoff selection, it’s not as though the preference stems from a belief that conference titles mean little. It’s more a belief that “SOS” has to matter to an even greater extent. Student Section associate editor Bart Doan makes the case in this roundtable that since “SOS” can be manipulated and inflated, the locked-in nature of a conference championship as a tangible achievement makes it a better criterion for playoff inclusion. That logic is unassailable. The point of emphasis in all this? Both SOS and conference titles need to be honored. The hard part is how the Selection Committee can manage to honor both as equally and evenly as possible.

College football is unique in that it’s the only sport where every regular season game means something. Unlike college basketball or the NFL, each Saturday is essentially a one-game playoff. Win, and you advance. Lose, and you start praying for other contenders to slip up so that you can get another chance.

In other words, every single game counts.

If this time-honored practice is going to continue under the newly created College Football Playoff, the Selection Committee must give more weight to strength of schedule than conference championships won.

A closer look at the two approaches will bear this out.

Let’s take a look at what would happen if conference championships won were a bigger factor to the Selection Committee than strength of schedule. By taking this stance, the committee is implicitly saying that only league contests matter since they’re the only ones that count in the standings. With this in mind, teams would more than likely schedule glorified scrimmages early in the season to get ready for the all-important conference games.

In addition, the despised tradition of “Cupcake Saturday” – where teams schedule an FCS opponent late in the season, normally the third Saturday of November, to get ready to get Rivalry Week – would undoubtedly continue.

No one wants to see either of those things happen, which is why the Selection Committee should make strength of schedule the most important criterion when selecting the field for the College Football Playoff. By placing a greater emphasis on strength of schedule, the committee will force teams to worry about the entire season, not just the league slate. This will result in more interesting non-conference battles, as college football’s top programs will square off more often in an attempt to get a leg up on the competition.

In addition to better non-league contests, the strength of schedule approach will also make it much easier to pick the best teams for the playoff. With the top squads facing off more often during the regular season, the Selection Committee won’t have to use its judgment as to whether the runner up from Conference A is better than the champion from Conference B. It can simply look at what transpired on the gridiron.

For these reasons, it’s clear that the Selection Committee must give more weight to strength of schedule than conference championships. It’s the only way to ensure that the College Football Playoff always gets the four best teams, while preserving the importance of the regular season.