Auburn-Ole Miss was the most memorable game from the past weekend, but TCU’s 31-30 thriller over West Virginia rated a very close second. TCU and West Virginia both fought long uphill battles for respect in college football in the first decade of this century. Now in the Big 12, they created a compelling drama on Saturday, one which showed that they both belong in the world of the power conferences.

What impressed you the most about TCU’s win over West Virginia, and how does this aspect of the Horned Frogs’ performance set up their big game against Kansas State this coming weekend?

At the risk of sounding like a broken record, the thing that impressed me the most was the play of Trevone Boykin.

Anyone who just looks at the stat sheet wouldn’t think that Boykin turned in another solid performance. After all, he completed just 12 of 30 passes for 166 yards with one touchdown and one interception. That hardly sounds like a big afternoon.

However, the difference between a good quarterback and a great quarterback is how he performs with the game on the line. With less than two minutes to play, Boykin delivered a 40-yard strike to Kolby Listenbee to put the Horned Frogs in range for the for the deciding field goal.

While Boykin’s resilience stood out the most, it’s also important to single out the Horned Frogs’ defense for how they played over the final quarter. During that span (not including West Virginia kicker Josh Lambert’s field goal to start the period), TCU held West Virginia to minus-7 yards and zero first downs.

So what does this win mean?

First, it gives the Horned Frogs another marquee win for their resume. While the margin of victory over the Mountaineers wasn’t as big as Alabama’s, it will likely carry more weight with the Selection Committee because it came in Morgantown rather than a neutral site.

More importantly, Saturday’s win puts TCU into a one-game winner-take-all-matchup with Kansas State this weekend. While a convincing victory over the Wildcats wouldn’t necessarily guarantee a Big 12 championship, it would carry a lot of weight with the committee, considering that Auburn struggled against Bill Snyder’s squad earlier in the season.

It would also test the Dr. Bo Wallace “anyone who watches the games” metric. Would the people on the Selection Committee really take into consideration the pass interference call/no calls at the end of the Baylor game?

We’ll certainly find the answer if the Horned Frogs continue to win out. 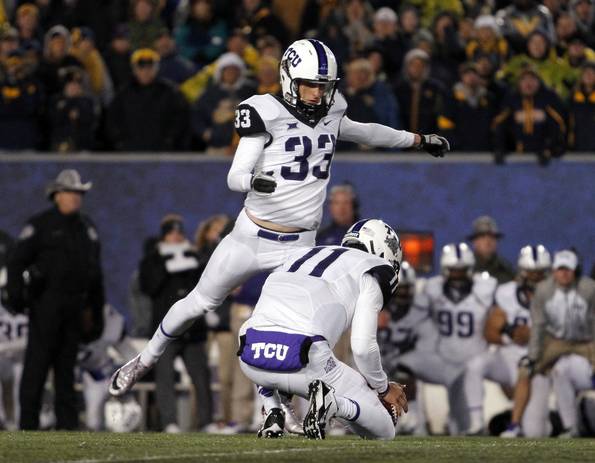 Bill Raftery is preparing for another season of college basketball. Had he called the TCU-West Virginia football game on Saturday, he would have gotten out the saute pan and the vegetable cart for TCU kicker Jaden Oberkrom, who brought plenty of ONIONS to Morgantown on his game-winning field goal.

The detail which stands out about TCU’s win is that in 2013, the Horned Frogs lost really close games left and right. They lost by three at Oklahoma. They lost by three at home to Baylor. They lost by two to Kansas State. They lost by three to these very same West Virginia Mountaineers. If you add the three-point loss to Baylor, any TCU player who had been in the program for more than just this 2014 season had absorbed a huge amount of on-field heartbreak. When a tidal wave of adversity sweeps over you — even if that adversity is confined to a sporting green and doesn’t touch on deeper, far more important aspects of human life — it is so easy to absorb that bad energy, to lack that airtight trust in oneself and one’s teammates in crunch time.

Trevone Boykin played poorly for most of this game. His team faced a two-score deficit in a nasty road environment complete with rough weather conditions. His offensive line and his ground game surely helped him, but Boykin made the handful of plays his team needed from him when the pressure of the hour hit its peak. Boykin, kicker Jaden Oberkrom, and the rest of the Frogs served up purple #ONIONS precisely when recent TCU history pointed to a sad ending in Morgantown. With that kind of resolve, TCU should be expected to play Kansas State on even terms. Energy won’t decide that game; technique and precision will. This will be an execution game, not something in which psychology should matter.

TCU answered any and all questions about its psychological makeup this past Saturday.