In the SEC West, a bunch of teams are beating up on each other.

In the Pac-12 South, a bunch of teams are beating up on each other.

Is it all the same? Is it completely different? Is it something in between?

This is an annually vexing component of college football: the cluttered, balanced division. Does this reflect quality depth or the absence of heavyweights… or both? Student Section editors Bart Doan and Matt Zemek discuss the Pac-12 South today, as the division prepares to give football fans two of the better games on what is a rather empty Saturday schedule.

How did last weekend’s events refine your perspective on the Pac-12 South?

It’s a part of every college football season: When one division or conference cannibalizes itself, it’s quality for some. When another division or conference does the same, it’s mediocrity or parity for others. An attempt to discuss the Pac-12 South simply begs for a comparison of the division with the SEC West, especially since the Pac-12 South has been able to crowd this week’s top 25 in the polls.

There are two major questions to wrestle with here: First, just how do you separate quality and cutthroat toughness from mediocrity and watered-down parity? Second, just how do the SEC West and Pac-12 South compare?

Question two asked for an SEC West-Pac-12 South comparison, so let’s provide one:

The SEC West’s showcase games the past two weeks — Alabama at LSU on Nov. 8 and Mississippi State at Alabama on Nov. 15 — have been average at best, probably a little worse. Alabama at Ole Miss was a quality game. Auburn at Ole Miss was messy but featured awesomely athletic plays on both sides. Arkansas-Texas A&M, at a much earlier point in the season, was — to borrow the NFL Films phrase for Super Bowl XII — “fiercely fought but frightfully flawed.” In general, you can see the toughness and quality of SEC teams, but that measurement of quality includes very inconsistent passing attacks and a propensity to commit lots of penalties (especially Auburn).

How about the Pac-12 South? 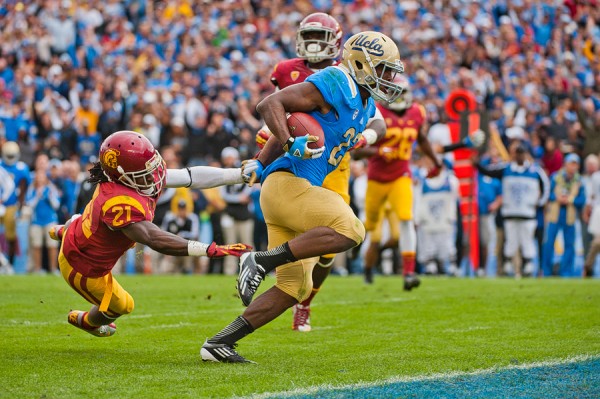 USC-UCLA (gosh, those dueling home jerseys look gorgeous…) and Arizona-Utah give the Pac-12 South a few chances to stand tall this Saturday. More is left to be said about the five bowl teams which populate the division, but we’re not yet sure if those statements will be positive ones.

It’s easy to continue to think of the Pac-12 as a land flowing with milk, honey and offense… without much defense. Well, that’s not really true this season. Arizona State has been carried by its defense in key stretches of the season. The Arizona-UCLA game finished 17-7 in favor of the Bruins. USC-Arizona was more slugfest than shootout. Utah has received timely contributions from its offense at times, but defense is what has carried the FBS leader in sacks (Washington is second, interestingly enough…) to an elevated place in the conference.

Yes, two Hail Mary victories have come from the Pac-12 this season — the league has retained some of its wacky characteristics at times. However, most of the league’s crazy video-game shootouts have involved Oregon, Washington State, or California as at least one of the two participating teams. The South has generally leaned more toward defense, “UCLA 62, Arizona State 27” being much more an exception than the rule.

What hurts the Pac-12 South in a comparison with the SEC West? Bad losses. Utah lost at home to Washington State. Arizona State lost at Oregon State. None of the top teams in the SEC West have worse losses than those. Arizona did beat Oregon, but UCLA and Utah got blown out by the Ducks at home. Three of the five good teams in the division took advantage of beating a 5-5 Stanford team — credit to the Pac-12 South for pouncing, but Stanford isn’t a quality win this year.

All in all, there’s not a vast ocean of difference between the Pac-12 South and the SEC West… but there are enough weaknesses in the division to show that there is at least a small lake between the two divisions. The Pac-12 South needs to put its best foot forward in the next two weeks. A bad showing would leave no doubt about the best division in the FBS by season’s end.

Aside from being a little stunned that Colorado is as morbidly bad as it is, nothing much really changed. No, I’m not going to go all pretend smart and say I saw Oregon State tripping up Arizona State, but I can’t say I’m shocked, either.

Handling success coherently is one of the biggest assets a person or group can have in life. Getting full of yourself is a lot easier than staying starved for something to prove. So after a big win against Notre Dame (which apparently has checked out now), a week that saw some solid Kool-Aid drinking for the Sun Devils, and then a road trip, it wasn’t surprising that they forked around with the Beavers and got bit in the end.

More than anything, it stings for Oregon, though the Pac-12 is tough enough that if you get out of it with one loss, you’re playing for the ‘ship regardless. That’s pretty much been the theme of that entire division, it seems. Get a big win, fall flat soon thereafter. 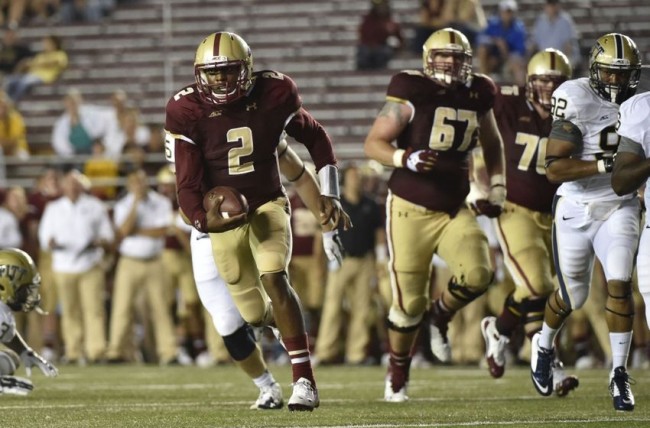 USC’s loss to Boston College in September did not shape national perceptions the way Larry Scott and the rest of the Pac-12 wanted. What was even more significant about that result is that it affirmed a point mentioned by TSS associate editor Bart Doan: Pac-12 South teams that won big games in 2014 were immediately ambushed in subsequent contests. The inability to follow one big win with another points to the inconsistency of each of these teams.

Arizona dumped Oregon in shocking fashion … and lost the next game to USC at home. USC clubs Stanford … and goes across the country to mediocre Boston College and gets kicked in the jaw. Clean Notre Dame’s clock … get bounced by tepid Oregon State.

Being successful every year is a process, and it usually doesn’t happen overnight. It’s tough going through the mental meat grinder of everyone going from indifferent on you, to the front page of every sports Internet web page with everything you do.

There are a whole lot of above-average teams in the Pac-12 South, but no elite ones. ASU had a chance to add that Sparky dimension to the Pac-12 title game, but it wasn’t meant to be. I’m done with this portion of the roundtable and using terrible Arizona State puns. You’re welcome.