The past week in college football featured one very important call the officials and replay booth got correct, whereas fans and writers watching on television were wrong (but understandably so). More about that incident will come later in this piece, but first, let’s hit the most ridiculous aspects of the week that was.

LENGTH OF GAMES: SOMETHING FOR COLLEGE FOOTBALL FANS TO CONSIDER

When the word “absurd” comes to mind, mileage can and will vary for plenty of fans. For some, it’s absurd that a football game should last nearly four hours, as was the case with Baylor-West Virginia last Saturday. The first half didn’t end until after 2 p.m. Eastern time, two hours into the game window. (The actual kickoff was a few minutes after noon Eastern, so the actual half didn’t quite last two hours itself.) The game filled up a four-hour window, one week after Baylor’s 61-58 win over TCU did the same.

It’s perfectly fair to lament the elongated nature of a game, especially since television networks aren’t yet accustomed to setting aside four hours as a regular practice. It should be said, however, that Fox Sports 1 did in fact give Baylor-WVU a four-hour window last Saturday. Right or wrong, what’s particularly worth monitoring in these four-hour games is how much said games are delayed by replay reviews. There were a few long and complicated reviews in Bears-Mountaineers, but exactly how long were they? Take them away, for the sake of argument — the contest still lasted more than three hours and 45 minutes.

You can bet your bottom dollar that in future four-hour games, replay reviews are going to be monitored for duration. The purpose? It’s simple enough: It’s important to ascertain whether reviews — and not pace or style of play or other factors — are centrally responsible for a game’s length. If replay review isn’t the main reason games run long, no one should be complaining about making more plays reviewable out of a fear that… games run too long because of replay review.

With the above point in mind, let’s unpack the box score from Baylor-West Virginia, which shows just how many other factors caused this game to run as long as it did.

There were 32 — 32!!!!! — penalties in this game, with plenty of those penalties being accompanied by consultations between or among officials. There were 33 incomplete passes and 55 first downs in this game. The teams combined to punt the ball 15 times. A total of 12 possessions ended in scores of some kind.

That’s a lot of clock stoppages and commercial breaks, not counting halftime and the breaks between quarters midway through each half. Baylor and TCU combined for 198 plays in their game. This game featured only 164 plays, but that’s still a lot. Baylor might have punted nine times, but on a day when the Bears failed to complete a majority of their passes (21 incompletions, 16 completions), their punts were not the result of clock-draining possessions — that’s part of why they were able to fit nine punts in a game that ended with a 41-27 score.

Big 12 games are shattering notions of what defense looks like. The mind is trained to think that a 41-27 game can’t have good defense, but West Virginia’s defense was even better than the Mountaineers’ 41-point offense against Baylor. Pace and style of play have a lot to do with why games run long — that’s what the Big 12 is teaching us. Regarding Baylor-WVU, the throwing of a flag on almost every other play — there seemed to be, unofficially, 827 pass-interference penalties called in this contest — played a large role in carrying that game through a four-hour television window.

OTHER COLLECTED ABSURDITIES, BEGINNING IN AUSTIN 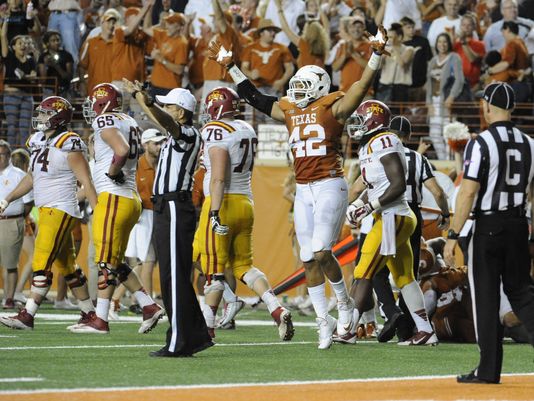 When you think of Big 12 offenses, you think of Baylor and West Virginia. Yet, the shootout of shootouts from the Big 12 in week eight was… naturally… the meeting of the turbo-charged offenses from Iowa State and Texas.

Yep. Iowa State and Texas created the box score most people were expecting from Baylor and WVU.  The Cyclones and Longhorns, if you do the math in comparison with the Baylor-WVU box score linked to above, committed 23 fewer penalties than their more accomplished conference brethren. Baylor and West Virginia produced a 68-point game, which is nothing in the Big 12. Iowa State and Texas eclipsed the 90-point mark while topping Baylor-WVU in first downs (57-55) and total offensive plays (168-164). Yes, the two teams were sloppy (five combined turnovers), but they still compensated for their missteps with boatloads of big plays.

That’s absurd in the extreme.

Along lines similar to those drawn in (and by) the Iowa State-Texas shootout, who could have possibly imagined that multiple Big Ten games not involving Ohio State or Nebraska would turn into shootouts? A follow-up question from week eight: Since when did Kirk Ferentz teams and Randy Edsall teams get enmeshed in scoring wars? Another question: Who was intellectually ready to see Purdue score 38 points in two Big Ten road games this season… and win only one of them?

What a world we live in, ladies and gentlemen. Wonders await at every turn.

The first third-down conversion rate applied to Virginia Tech in its loss to Pittsburgh. That makes sense.

The second statistic was the combined third-down conversion rate for Utah’s and Oregon State’s offenses last Thursday. That makes sense.

BYU, for all of its injuries, was still cruising past Nevada at home, 28-13, late Saturday night.

THE BOX SCORE OF THE YEAR… PROBABLY THE DECADE… AND JUST MAYBE, THE CENTURY WHEN IT’S DONE

Behold, citizens of the world. You will not see the like of this ever again… unless Will Muschamp is allowed to be a head coach at another FBS power program again.

THE NON-ABSURD EVENT OF THE WEEK: GIVING OFFICIALS, REPLAY REVIEWERS, AND MIKE PEREIRA A LOT OF CREDIT

It’s once again time to give credit where credit is due and not turn officiating discussions into praise-free zones. When refs, reviewers and analysts make mistakes, it’s so easy to pounce, but when these people get it right — especially in situations when it seems they got it wrong — it is absolutely important to make note of such instances and praise the people involved.

Point-blank: The on-field officials, the replay booth in Berkeley, and officiating-replay analyst Mike Pereira all got a huge call right on Saturday afternoon during the UCLA-California game.

First, go to this video (which regrettably could not be embedded) at the link provided:

What you will see in this video is what you saw if you were watching the game on ESPN2 or ABC.

Note the 0:16 and 0:37 marks of this 41-second video. These are the two points when Marcus Rios of UCLA is shown with his foot sliding out of bounds as he gets an awkward but real grasp of the ball. The way this play was shown on the ESPN2/ABC broadcast suggests that Rios’s foot was never established in bounds with reasonable control of the ball (with that always-awkward grip).

Mike Pereira said in real time that this call was correct:

How can anyone say the foot was out of bounds in the Cal game.? He was inbounds when he got control and then slid out of bounds.

Based on what television viewers got to see, this verdict seemed to be clearly wrong.

Pereira offered a fuller explanation-cum-rebuttal to those who insisted he was wrong. I was skeptical as I clicked on the following link:

Cal fans flooded @MikePereira's feed after that crucial @UCLAFootball INT. Here's Mike on why the refs got it right. https://t.co/hAyc0VQkPO

Pereira was able to freeze-frame the play and show that Rios’s foot was clearly established in bounds before it slid. ESPN2/ABC viewers did not receive the benefit of a freeze-framed camera shot. Pereira, whose job it is to offer illumination, explanation and clarification, worked with an image and broke it down into its most granular detail to not only help viewers, but correct them.

The important point here: Viewers were not wrong to think that the pass was incomplete, becasue they weren’t given the freeze-frame image on television. Pereira, though, was right. Of far greater significance for UCLA coaches, players and fans is that the on-field official and the replay booth were both right as well. Had they been wrong, the Bruins might have lost a game they — and Marcus Rios — fully deserved to win.