As we continue to make our way through the college football season, words matter less. Images — and the persistent realities they affirm — matter more.

There’s nothing new about a bad pass interference call or non-call deciding a game. The newsworthy aspect of this reality is simply that it continues to be allowed to happen. If college football doesn’t make pass interference and defensive holding reviewable in the final five minutes of the fourth quarter at the very least in 2015, the sport is simply failing the coaches and players who bust their butts for championship glory… and the entertainment of the public.

Last Thursday, as week seven of the season began, BYU was jobbed at UCF. The progression of bad call: 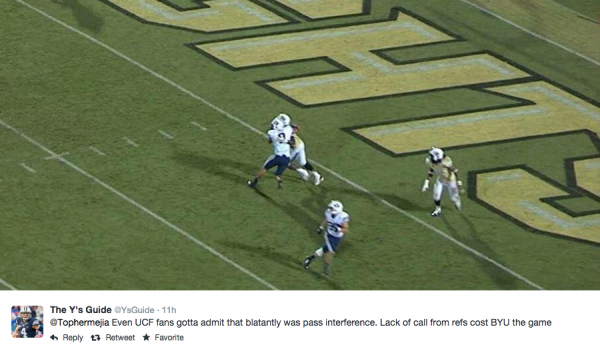 … to the conference’s acknowledgment of an officiating error:

BYU WR Jordan Leslie said there is "no consolation at all" that Big 12 supervisor of officials told Bronco final play was pass interference.

… is as old as the scriptures, be they the Book of Mormon or the Old Testament or the New Testament.

Precisely because this reality is so commonplace, BYU was hardly the only team to get burned by this problem in week seven.

TCU did gack away a 21-point lead to Baylor, so from that standpoint, the Horned Frogs have only themselves to blame. Let that point be acknowledged in full. Yet, TCU and Baylor might still be playing had this absurd pass interference call not gone against the Horned Frogs (video courtesy of Larry Brown Sports):

Let’s say it once more, with feeling: Few calls are more influential in a game than pass interference calls (penalty or no penalty, it doesn’t matter). In 1980, this might not have been the case, but in today’s pass-centric iteration of college football, the downfield pass is king. This is no longer a sport for running backs as it was in Herschel Walker’s day. Pass interference should be reviewable throughout a game if we want to live in an ideal world, but at least the last five minutes of regulation demand an added layer to the review process. Enough!

Speaking of officiating mistakes that are acknowledged after the fact (as in BYU-UCF) and do absolutely nothing to comfort the players and coaches of the losing team:

SEC tells the AP it made mistake with running clock at end of Alabama win at Arkansas. http://t.co/YxD9hAbkl9

To recap, Alabama — leading by one point — committed a false-start penalty with 1:01 left against Arkansas. In this case, unlike the previous few weeks in which Tennessee Volunteer opponents committed live-ball (action) fouls — Georgia committed holding in the final minute of one game against Tennessee; then Florida committed a personal foul in a separate game against the Vols — Alabama’s foul was a dead-ball, pre-snap foul. The SEC was clear in saying that the clock should not have restarted. Yet, Tennessee’s experiences against Georgia and Florida might have left fans and pundits (such as this one) wondering if a clock re-start was an actual rule.

Here’s the point of clarity (not a happy one, but an illuminating one) on Bama-Arkansas:

Given that the SEC did not reprimand officials for errors in the Tennessee-Georgia or Tennessee-Florida games when the clock re-started on a penalty in the last two minutes, it’s clear that the conference’s acknowledgment of an error in Tide-Hogs means something. Specifically, the acknowledgment of an error in this situation shows that there’s an inconsistency in the rules relative to live-ball or dead-ball fouls, which is tied into the action of the previous play. All these rule inconsistencies demand the NFL’s common-sense rule: When a penalty is committed in the last five minutes of an NFL game, the clock stops.

You might have watched the Dallas-Seattle NFL game last Sunday. When the Cowboys committed a holding penalty inside the final two minutes of the game, the clock didn’t re-start. It was and is so obvious that the clock should stop in order to penalize the Cowboys, even though the Seahawks declined the penalty. College football should have solved this problem years ago, but it hasn’t.

One tweak, by the way: The clock should be made to stop if a clock stoppage works against the offending team. However, if a team is on offense and needs as much time as possible, a last-minute penalty should result in time being removed from the clock. This should apply to holding penalties and other live-ball fouls as much as dead-ball fouls.

Do you ever go through a season and wonder, “Gee, what’s the full list of plays that are and aren’t reviewable?” It’s so hard to keep track, right? Well, here’s one more replay-review loophole, courtesy of the Penn State-Michigan endgame, when a Penn State onside kick recovery was wiped away due to an errant offside call against the Nittany Lions:

Well, at least Penn State could get this play reviewed, right?

Another stupid replay-review policy RT @BTNBrentYarina An offside call on late onside kicks should be reviewable. It's not, but it should be

POSTSCRIPT: A BREAK FROM ABSURDITY — GIVING AN OFFICIATING CREW ITS DUE

Let’s deviate from this focus on the absurdities of week seven to acknowledge an officiating crew that turned in a spectacularly good piece of officiating.

Remember this from a year ago in Tempe, Ariz.?

The crew in the LSU-Florida game learned the right lessson: use common sense when an opposing team tries to use street smarts.

LSU was trying to set up a field goal in the final seconds of regulation against Florida. The Gators lay on the ground to try to delay the subsequent snap, in which LSU wanted to spike the ball to stop the clock. The clock ticked down… 13, 12, 11, 10… and the Florida pile of players remained in place over the ball. The clocked ticked a little more… 9, 8, 7, 6, and progress was slow in coming. The clock reached three seconds, and it appeared that a Wisconsin-Arizona State repeat was emerging in Gainesville, Fla. However, the officials stopped the clock and made an announcement that the clock needed to be reset to 10 seconds. The ball was readied for play. LSU gained the chance to spike the ball and then set up its field goal.

One hopes the Wisconsin-Arizona State crew was watching.