It was Championship Weekend and heartbreak was expected across the board, but the teams with the most on the line didn’t fall prey to the upset bug. In a twisting finish to a season that has seen “chaos” rule around every corner, the top six teams in the AP poll won their games. Of course, the fact that the top teams in the country were winners doesn’t mean there weren’t sad fan bases this weekend.

Based on the results from Championship Weekend, let’s take a look at the saddest fan bases:

The Badgers simply forgot that they were playing for the Big Ten championship on Saturday night and got blown out by the Ohio State Buckeyes. Actually, I’m not sure “blown out” actually does it justice. They got annihilated.

That feeling when you’re down 38-0 in the first half: pic.twitter.com/7zNEQyKNJl

Now I know how Nebraska feels when they play #Badgers

The Sooners had this one won. They led Oklahoma State by 14 in the fourth quarter (and at home), but they watched the Cowboys come from behind. On a fourth and nine from the Oklahoma State 40, the Sooners punted the ball and Tyreek Hill took it back 92 yards to tie up the game with just 45 seconds left. In overtime, the Sooners got the ball first but moved backwards and then missed a field goal. The Cowboys made their field goal and — at the expense of the Sooners — became bowl eligible.

Sad they lost but still love my Sooners ❤️ pic.twitter.com/qsjzH4iq0r

OKLAHOMA fans who thought it was over and can’t get back in #NEVERQUIT #Bedlam pic.twitter.com/XySdtkAcme — Alex Scrimpshire (@scrimpshire22) December 7, 2014

Congrats to my pal @fgbrisco & his OSU Pokes for beating my #Sooners in OT 38-35. DAMN

Ranked seventh in the country, the Wildcats had an outside shot at getting to the College Football Playoff, but first they had to beat the Oregon Ducks for the second time this season. That wasn’t going to happen. The Ducks had a bit of a slow start, but when all was said and done they overwhelmed the Cats in the Pac-12 Championship Game.

Sad about the Oregon Ducks beating up on Arizona Wildcats

The Tigers were heavy underdogs against the Alabama Crimson Tide in the SEC Championship Game. They were able to cut Alabama’s lead to eight in the third quarter, but from that point onward it was all Tide: 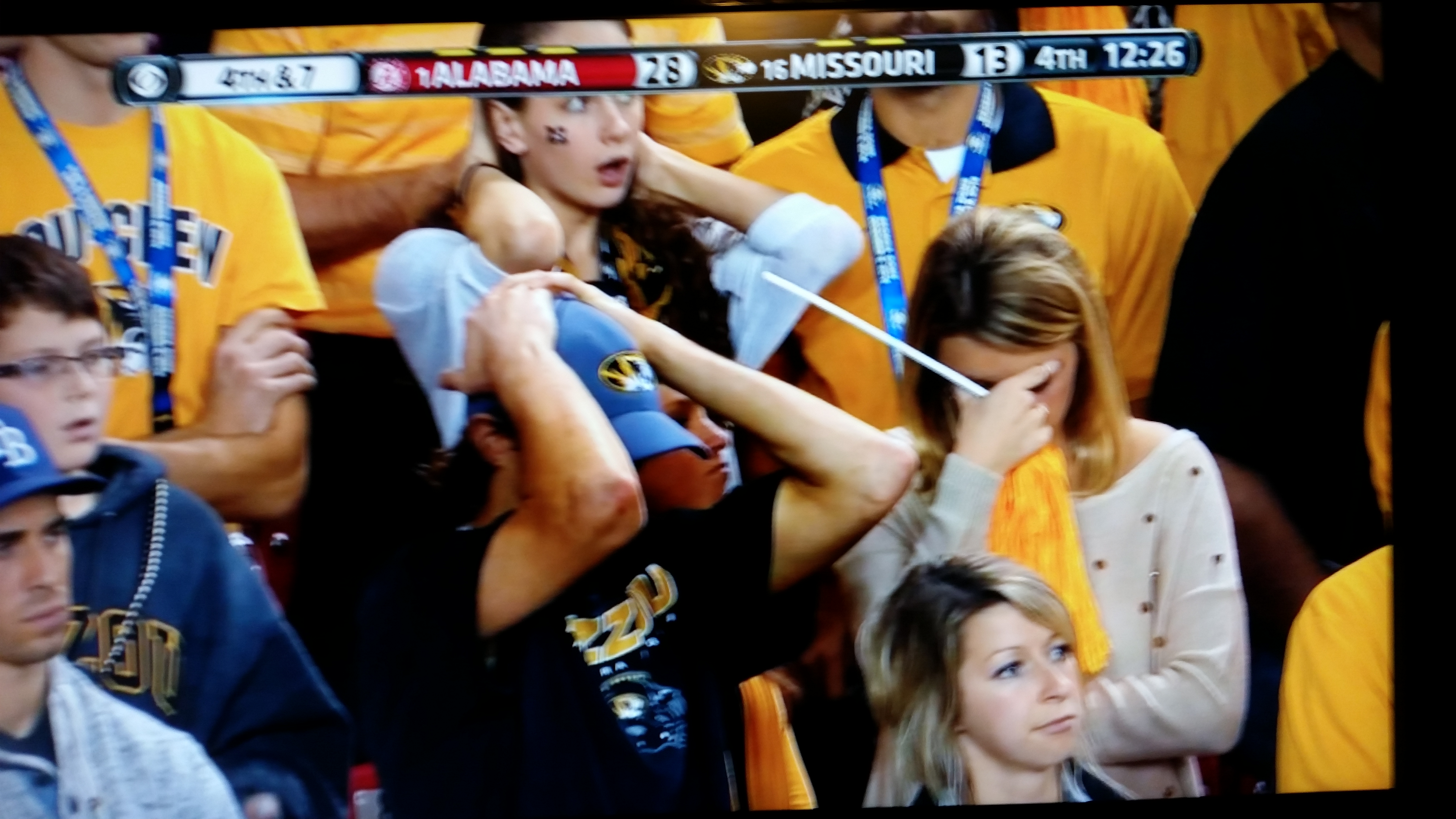 Surrender Cobra in the 2nd quarter? That can’t be good… pic.twitter.com/YwomTdXABx

An elderly Missouri fan is caught texting with a dejected look as his team is losing 42-13! Can you blame h… https://t.co/T1nagyUYrK

ECU trailed 26-9 in the third quarter only to come roaring back against UCF on Thursday night. The Pirates took a 30-26 lead with just over two minutes left in the game. On UCF’s final possession, the Knights had one play left and heaved up a Hail Mary. Their prayer was answered. After a huge comeback, the Pirates lost in the most spectacular way possible. Oh, the heartbreak: