The Z Section will often feature a single-issue essay, but week one of a college football season is a good time for a notebook, touching on several items of interest so that you’re brought in touch with a wide cross-section of the college football world as the sport returns to our televisions and the rhythms of a Saturday-to-Saturday week.

One topic that deserves more than just a few sentences is University of Texas-San Antonio head coach Larry Coker, the author of a dominant performance on the road against a Houston Cougar side that was supposed to contend for the championship in The American. UTSA didn’t merely beat Houston; it thrashed the Cougars. The result cemented UTSA’s place as a top-tier Conference USA contender, but it also humiliated a bigger program within the state of Texas, a program whose 2013 team came within one pass, and roughly 10 yards, of taking down the UCF Knights in Orlando. Drubbing Houston in such a thorough manner points to a team that was supremely prepared for anything and everything that came its way.

In other words, the Roadrunners benefited from some good coaching, thanks to Coker.

Let’s acknowledge this point up front: The mere existence of present-moment success for a coach doesn’t inherently mean that mixed or uncertain records at previous schools and jobs are somehow better than previously thought. Coaches can be great in one context and setting without changing the facts of their previous tours of duty. Just because Coker is doing well at UTSA doesn’t mean that his career at Miami should be viewed differently.

If you mention the words, “Larry Coker, national championship head coach,” you will certainly encounter some people who will be impressed by that fact. Yet, you’ll meet many others who view Coker as one of the lesser members of the national champions’ club. This tweet, not from the weekend but over a year ago, is representative of that link of thinking:

so is larry coker. and gene chizik. RT @bears6808: Les miles is a championship coach in case you forgot

Did Butch Davis set the table for Coker? Of course. Did Miami begin to decline after Ken Dorsey left? Sure it did. Was the 2005 Peach Bowl, a 40-3 loss at the hands of LSU, a complete and utter embarrassment? No question.

Yet, stop yourself for a moment.

Wouldn’t Miami kill for an ACC Coastal Division championship, a loss to Florida State in the ACC Championship Game, and a bowl akin to what the Peach/Chick-Fil-A was before it joined the College Football Playoff rotation? The depths to which Miami declined in the middle of the past decade are still higher than the current state of the program nearly 10 years later.

Florida, under Steve Spurrier, endured a Citrus Bowl season in 1997 with Doug Johnson after Danny Wuerffel left. Oklahoma hasn’t been the same since Sam Bradford left. Texas is looking for its next Vince Young or Colt McCoy. The point is plain: Dynastic or, at the very least, rousingly successful periods don’t go on forever. Dips occur, and the 7-6 season Coker endured at Miami in 2006 might have meant that it was indeed time for him to go at a program that strong.

The illustrative comment to insert here, though, is that the 2006 season represented the biggest blot on Coker’s Miami resume… and that was one season, not two or three. Coker very much sustained the Miami program, or at the very least, a lot more sustaining than declining occurred under his watch. If you’re going to hold 2006 and even the 2005 Peach Bowl against him, you have to credit him for what preceded those black marks and honor the consistency of what Coker achieved.

There’s a measure of irony in all this: Florida State, from 1987 through 2000, finished in the top five of the AP poll in every season. The Seminoles maintained a level of consistency that no other program has been able to establish over the course of the past 30 years.

Nebraska and Oklahoma traded blows in the 1980s. Miami’s run from 1983 through 1992 was spectacular, but it wasn’t an uninterrupted run; the 1984 season and the 1986 Sugar Bowl got in the way. Florida’s run in the 1990s was strong, but Florida State usually bested the Gators in that decade. USC destroyed most of college football for seven seasons, but then the edifice fell apart in 2009. Florida State’s ability to dominate college football for 14 straight seasons remains a remarkable feat, something quite uncommon to the sport in its modern age.

Here’s the money line: Coker-coached teams at Miami helped bring that 14-year run to an end. Coker ushered in the period that began Florida State’s own decline, the one that led to Bobby Bowden’s ultimate exit… even though said exit occurred after Coker was pushed out the door himself.

No matter how soft the schedule or how much the talent, going unbeaten in one college football season is extremely hard to do. Coker lost only one game in his first two seasons at Miami, coming within one unforgettable penalty flag (that late but reasonable call at the end of the 2003 Fiesta Bowl) of back-to-back national titles. Did he have a lot to work with at The U? Of course.

He did quite a lot with what he had.

While we contemplate what Coker is doing at UTSA, it’s his legacy in South Florida which merits a re-examination in light of the Hurricanes’ current struggles.

On to the notes portion of this week’s column: 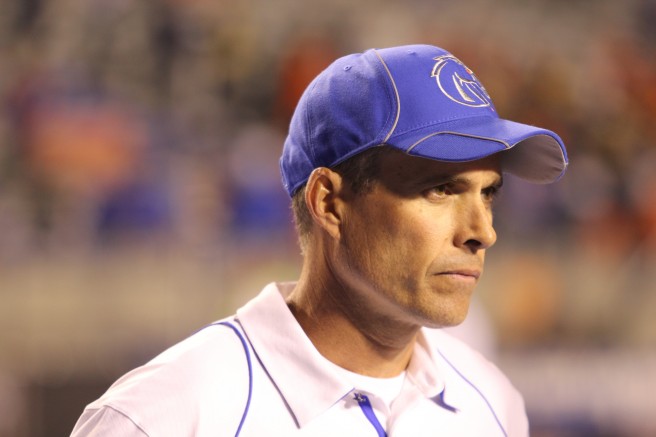 The notion that there’s even one Boise State fan who is vigorously rooting against Chris Petersen this season is not a matter of great consequence… but it’s plenty nauseating just the same.

I interacted on Twitter with Boise State fans and journalists about the fact that some Bronco backers are rooting against Chris Petersen this season, a point widely acknowledged by neutral and non-neutral parties. Yes, the answers as to why Petersen is being rooted against are obvious — conference strength, “Group Of Five-versus-Power Five,” and “Coach Pete was going to live in Boise forever” — but can we get across the simple point that people you admire don’t cease to be admirable because they:

A) want a new job in a new setting;

B) speak differently in what is a highly political and public position;

C) wear a different color on the sidelines on gamedays.

If Boise State plays Washington, root against Petersen by all means. Otherwise?

This is really a thing?

Look at it this way: Let’s say Petersen retires in the year 2028. Would Boise State fans suddenly “admire” him again after taking a “14-year break” from expressing admiration and gratitude toward him?

That’s not how life works. If that small bread crumb of perspective can’t be gained amidst the cutthroat competition in this sport and its annual battles for conference and region-based respect, we’re in a sorrier state than I thought.

Tulsa, Tulane, Villanova, and any other team that missed a field goal under 30 yards in a high-leverage situation this past weekend: You know what to do on the matter of “settling for a field goal” from now on in 2014.

Three games in which the first team listed stormed the palace gate in the opening several minutes and carried most of the play in the first half, only to get steamrolled in the second half: Colorado-Colorado State; Clemson-Georgia; Wisconsin-LSU.

Remember what we said about endgame management a week ago? UCF needed to kneel at the Penn State 1 instead of scoring right away in the final 70 seconds of that game on Saturday in Dublin. Someday, the whole football community is going to realize this is a necessary move in a majority of roughly similar situations, though not all of them.

Can the Pat Fitzgerald hype finally die down now… until he reaches a true big-boy bowl… which probably won’t happen anytime soon?

So, Texas Tech went all-in with Kliff Kingsbury. The move can easily be explained. Kliff makes a splash and generates enthusiasm and other not-that-tangible kinds of benefits… in Lubbock, Tex. The Red Raiders feel they need to show Kliff they love him a lot. Fair enough.

Yet, I’ve always felt that this business is about winning above all else. If that’s the measurement, Kingsbury has a lot to prove in a tough conference. We’ll see.

UTEP 31, New Mexico 24 — does this say more about the Miners getting better or Los Lobos failing to do the same?