Saturday’s supposedly dead slate of nothingburger games produced a lot of entertainment, especially in the night window, with USC getting knocked off by Boston College, Florida surviving Kentucky, Purdue giving Notre Dame much more of a game than expected, and Penn State making a great escape to somehow get out of New Jersey with a 3-0 record. On Saturday, Will Muschamp of Florida and Paul Johnson of Georgia Tech came within an eyelash of suffering job-crippling losses, the kinds of setbacks fading careers don’t recover from… except, perhaps, at another school. Virginia Tech was ambushed at home by East Carolina. In the featured game of the day, South Carolina improbably stoned Georgia inside the red zone late in the fourth quarter.

It was, in short, a noisy and clamorous day of football, one in which many games begged for attention. One contest that can’t escape notice is the one inside AT&T Stadium — informally known as JerryWorld — between the UCLA Bruins and Texas Longhorns. It was a vintage college football game in the sense that just when you thought it had acquired a particular identity with clear dimensions, it deviated from the template and offered a much more textured ending than the first three quarters suggested.

Through 50 minutes, this was a pillow fight — a physical one, perhaps, but ultimately, an exhibition in which neither team could land a haymaker. UCLA absorbed an elbow injury to starting quarterback Brett Hundley in the first half, but even with Hundley in the game, the Bruins didn’t do much against a well-coached Texas defense. Their offensive line, a noticeable weakness, continued to be exploited by Charlie Strong’s defensive front.

Texas, though, could not surpass UCLA — the Longhorns lack their starting quarterback (David Ash) and their starting center (Dominic Espinosa), and their stable of skill-position talent is fairly barren. Texas’s defensive performance and overall resilience — far more sustained than against BYU on Sept. 6 — lent a lot of credence to the contention that the Longhorns trust what their coach is telling them, and that the attitude of the program is being rebuilt in a proper manner. However, the short-term outlook in Austin is grim, because there remains a lack of natural, overwhelming skill. BYU fans who watched Texas a week ago were not exactly convinced of the Longhorns’ capabilities:

I watched Texas and Houston live in consecutive weeks. Houston has better skill guys. That should never happen. Ever.

It was this very lack of eye-popping qualities on the Burnt Orange sideline which made it easy to think that when UCLA gained a 13-10 lead with 9:13 left in regulation, it had forged an advantage which would hold up for the duration. Yet, in accordance with the crazy nature of college football, the final 9:13 — instead of maintaining the pattern of the first 50 minutes — veered in a different direction.

Texas’s offense came to life for one magical drive, with the offensive line blasting open holes that hadn’t opened up on many occasions through the previous three-plus quarters. When quarterback Tyrone Swoopes threw an eight-yard touchdown pass to John Harris with 5:13 left, all eyes shifted to a UCLA offense that had scored just one touchdown on the night. That offense needed to score one more touchdown to win. Otherwise, the Bruins were going to endure a wrenching loss, one they did not expect to encounter so soon in a season laden with through-the-roof expectations. 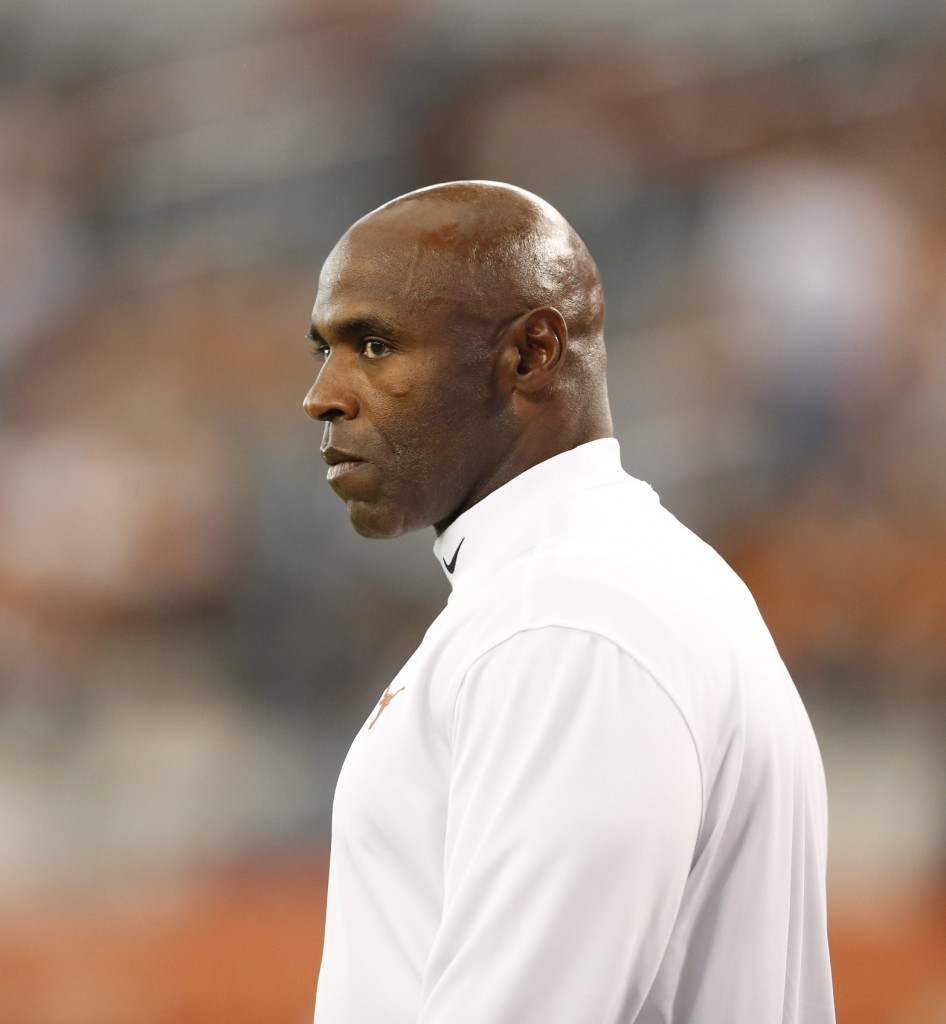 Charlie Strong does seem to be changing the way things are done at Texas, a very good thing for the Longhorns. Yet, that process of change just isn’t going to be a swift one. It will take time, and Saturday night’s loss to UCLA affirmed as much.

If UCLA’s offense was going to score, it was probably going to need some help, and after the Bruins’ defense forced a three-and-out with just over three minutes left, coach Jim Mora’s team received the turning-point play it was looking for.

Ishmaeal Adams, aided by a few thunderous blocks, returned a Texas punt 45 yards to the Longhorn 33. Emboldened by the reality of a short field, UCLA felt that it could take a chance with a downfield pass, something it had rarely done over the previous quarter and a half with backup Jerry Neuheisel filling in for the injured Hundley. UCLA’s willingness to be bold paid off, as Neuheisel made a perfect throw to Jordan Payton for the go-ahead score. Swoopes didn’t have another good drive in his balky right arm on the subsequent series, and UCLA got out of Dodge with a 3-0 record.

This was, on so many levels, a great win for UCLA. The Bruins survived an injury to their starting quarterback. They won what was technically a neutral-site game, but essentially a roadie. They defeated one of the biggest brand names in college football. Their defense played at a high level most of the night. Hundley’s injury status will be something to watch, but if he’s relatively okay, he’ll be able to play in a big Thursday night game against Pac-12 South rival Arizona State in a few weeks. There’s a reasonable line of argument in which this is a great win for UCLA.

Why, then, should one be skeptical, though?

If three games are enough to convey the notion that “You are what you are,” UCLA is a team with a subpar offensive line. With or without Hundley, the Bruins need a transformative sequence on that part of the roster, an awakening which can jolt this offense into a much higher realm of performance. If that doesn’t happen, this Texas win will lose much of its meaning. The Bruins are 3-0, but with Pac-12 play looming, there’s much to be concerned about.

Only time will tell if this escape in the Lone Star State becomes a shining memory in an unforgettable 12-1 season… or the temporary avoidance of a lot of looming pain.