The Michigan Wolverines are off this week after defeating Penn State last weekend, but there will be college football played in Michigan Stadium this weekend. Making a return to the Big House on Saturday will be Slippery Rock University, a Division II program with a bit of a storied history and connection to Michigan that many may not be aware of. To mark the occasion of playing in Michigan Stadium, The Rock will be rocking some special football uniforms.

First, a somewhat brief history lesson to help explain why Slippery Rock is playing Pennsylvania State Athletic Conference foe Mercyhurst in Michigan Stadium this weekend. Since 1959, when scores are announced in Michigan Stadium, it has become a tradition to announce the Slippery Rock game. It started as a joke of sorts: Michigan’s public address announcer happened to see a Slippery Rock score on the ticker and decided to announce it to the Michigan faithful to crack some smiles during an otherwise boring afternoon.

At first fans thought it was a joke because, honestly, how many people have heard of Slippery Rock? What kind of name is Slippery Rock? (It has colonial roots, with legend having it the name came from colonials eluding Native Americans who had slipped on wet rocks — seriously.) The scores of Slippery Rock games became a regular announcement during the live scoring updates to fans in Michigan Stadium, often drawing a large response from fans when The Rock was doing well.

Michigan had a tradition of holding a Band Day event during the regular season, which invited high school marching bands from all over to join the Michigan marching band. However, it was becoming a costly event for Michigan, with band students eating up potential ticket sales and making the Band Day event less desirable from the athletic department’s financial vantage point. However, the school wanted to keep the Band Day event going and decided there was a way to do it when Michigan football was idle or on the road. Looking for a way to keep it going, Michigan extended an offer to Slippery Rock to play in Michigan Stadium as part of the Band Day event in 1979. Slippery Rock accepted the invitation, and had a game against PSAC rival Shippensburg moved to the Big House.

The game was a huge success. Slippery Rock and Shippensburg each loaded buses and buses of fans and students (and marching bands, of course) to make the drive to Ann Arbor for what was a once-in-a-lifetime event for these little schools from the middle of nowhere Pennsylvania. (I would know; I went to Shippensburg and would have gone to Slippery Rock if it were not on the other side of my home state of Pennsylvania.) Slippery Rock was hopeful a total of 15,000 would enter Michigan Stadium, but the Michigan fans helped boost that attendance to 61,143. The attendance from that day remains a Division II attendance record to this day. Shippensburg spoiled the day with a dominating performance, winning 45-13.

Slippery Rock returned to Michigan Stadium two years later in 1981 but has not been back in the Big House since. This weekend, in honor of the 35th anniversary of its first trip to Ann Arbor, Slippery Rock will return. The school will do so in style.

Slippery Rock has shown images of the uniform it will wear this weekend, and it has a definite old-school flavor. The design of this uniform has been planned for a year, and the finished product is pretty good. Slippery Rock traditionally wears a green jersey at home with a white helmet. Because Slippery Rock’s colors are so similar to Michigan State’s signature colors, The Rock decided it would be best to show gratitude to its Michigan hosts by not wearing Michigan State colors. This led the school to adopting a one-time look in gray. I normally frown upon alternate gray uniforms, but considering the circumstances and how this looks, I actually support these.

“We wanted to find a unique way to show appreciation for our gracious hosts at the University of Michigan,” said Slippery Rock head coach Dr. George Mihalik (yeah, Slippery Rock’s coach has his doctorate). “We thought that in order to respect the Wolverines’ great rivalry with Michigan State, we wouldn’t wear our traditional home green uniforms in their stadium.”

It starts with a reflective silver finish on the helmet from Riddell. It comes with a white facemask and the standard “S” logo on the side in its regular green. Usually, the helmet is white, but the silver is a nice touch. 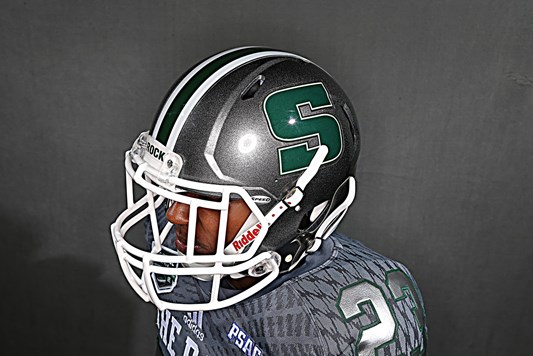 As you can see, a silver jersey contains silver numbers outlined in Slippery Rock’s signature green. “THE ROCK” across the front is the traditional look of Slippery Rock’s uniforms, and that remains without fail, just below the commemorative patch for this game, the Adidas logo, and the PSAC logo patch. The tread marks across the top of the jersey are interesting and give the jersey a little more character without being a total distraction. 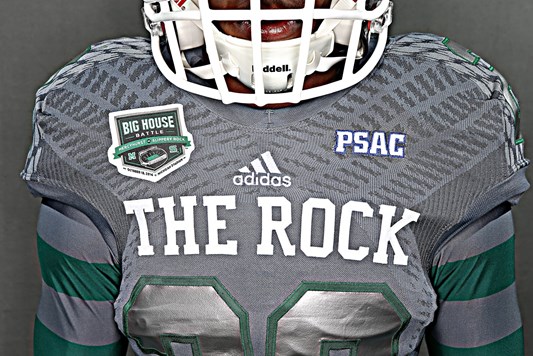 You will notice Slippery Rock is wearing striped sleeves underneath the jersey. This is a throwback to the program’s roots and has been something the team has done all season with white and green stripes in honor of the school’s 125th anniversary. This week the white is replaced by silver to keep in line with the uniform’s overall look, and to once again avoid showing off Michigan State colors.

To complete the look, Slippery Rock will wear silver pants, socks and shoes as well. I generally roll my eyes at solid color uniforms from head to toe (there are some notable exceptions), and I have a history of giving a thumbs-down to anything Adidas puts together, but I feel pretty strongly in saying Adidas and Slippery Rock knocked this one out of the park.