The Texas A&M Aggies will be digging deep into the history of the football program with a new uniform design this weekend. It is so good, it will have you wishing you could experience the days of leather helmets. When Texas A&M takes the field this week against Louisiana-Monroe, it will do so wearing a specially designed uniform from Adidas that honors the 1939 Aggies.

It is beautifully and masterfully done, complete with fake stitching on the helmet to simulate the look of an actual leather helmet from the era. Take a look at the pictures shared by the Texas A&M equipment staff, showing the level of detail being put into the look of the Texas A&M helmet.

Probably one of the coolest ones we have worked on! #throwback #12thMan pic.twitter.com/KZnSUGCqOq

Yes, fake stitching and hand-painted raised ear protection exist, in addition to some artistic wear-and-tear as though the helmets have already been broken in. This is incredible.

As you can see, the helmet (designed by Hydro Graphics and Riddell) will use a version of the winged helmet design more commonly associated with Michigan and Princeton. However, the Aggies have worn the winged design as well. In 1934 the Aggies wore a white helmet with a maroon wing design. At the time, this was more of a secondary helmet choice used by a few players during the season, and not the standard look. The Aggies usually wore a dark helmet with white stripes on it, but in 1936 the main helmet had adopted the wing formation, with a maroon leather helmet with white wings. Texas A&M wore this helmet design until 1943, and it was never seen again.

I love the concept of emulating the look of the old leather helmets, and I am glad to see such care and detail go into the concept here for Texas A&M. I would love to see something similar be done by another storied college football program. Seeing how this one looks, I imagine a similar concept for Michigan would look awesome. The Washington Redskins did something similar, but this Texas A&M helmet takes it to the next level. It even includes a stenciled mark of AMC, for “Agricultural and Mechanical College of Texas,” although that cannot be seen from the images provided. This is what the helmets had 75 years ago, so Texas A&M is not breaking the mold with its tribute uniform.

The uniform itself is pretty typical of Texas A&M’s look, except with the full features of the Adidas TECHFIT uniforms. You can read the public relations spin on the advanced features of the jerseys on the school’s press release if you wish. 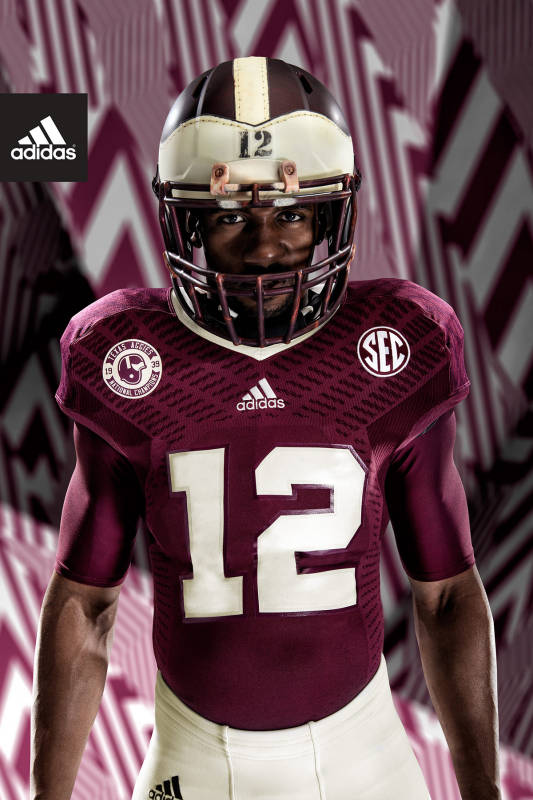 So, what is so significant about the 1939 season for Texas A&M?

Texas A&M was named the national champion for the 1939 season by the Associated Press, although USC also claims a national championship that same season as the top-ranked team in the now retired Dickenson System. The Trojans began officially claiming that national championship as a part of program history in 2004, because that’s the thing to do these days. Led by College Football Hall of Famer and All-American John “The Haskell Hurricane” Kimbrough, Texas A&M went 11-0 in 1939, including a 6-0 record in the old Southwest Conference. The season ended with a 14-13 victory over No. 5 Tulane in the Sugar Bowl. So yeah, it’s a pretty important year for Texas A&M.

Overall, this looks like a great throwback uniform to be worn by Texas A&M. It may be its best alternate uniform over the last few years. I generally find it easy to slam Adidas uniforms, but the company did a solid job on this one, with the help of Hydro Graphics and Riddell on the helmet. Good job all around here.