Ordinarily in this weekly feature I try to highlight a unique college football uniform being worn on game day. These uniforms have typically been specially designed for a certain occasion like a Division II school playing in Michigan Stadium or another program paying tribute to a national championship team from a past era or one historic player. You will not find that here this week, however. Instead, we are going to focus on two teams wearing their standard home uniforms this weekend and why it is cool.

USC and UCLA will renew their rivalry this weekend in the Rose Bowl Stadium. Positioning in the Pac-12 South standings will be on the line for both the Trojans and Bruins. The trend in college football is for programs to break out the most stylish uniforms they can for big games, when everyone will be watching. UCLA has fallen victim to this trend in past games against its crosstown rivals, but thankfully that will not be expected to be the case this weekend. Both USC and UCLA will wear their standard home uniforms for the game, continuing a longstanding tradition that has recently been rekindled in the series. 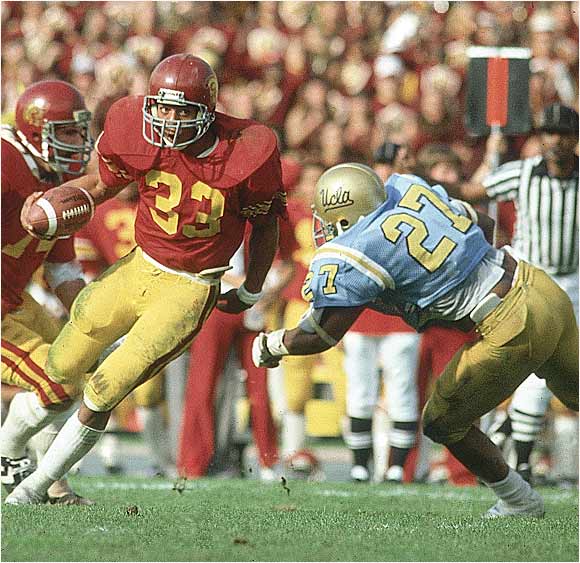 The tradition of both teams wearing home uniforms goes back decades in the series history. USC and UCLA each played home games in Los Angeles Memorial Coliseum from 1928 through 1981. Because both schools called the Coliseum home, both teams wore their home uniforms when the two met in a game. It was one of the more unique sights to see for decades in college football, because home teams are typically the only team wearing a colored uniform. The Bruins moved to the Rose Bowl Stadium in 1982 for home games. In 1984, UCLA played host to USC for the second time since moving from the Coliseum. It was at this point USC showed up for the game wearing its standard white road uniform, and for a long time the road team dressed for the role.

Part of the reason this practice of wearing road uniforms also continued was due to an NCAA rule requiring road teams to wear a contrasting color of the home team’s uniforms, which typically meant road teams were expected to wear white uniforms. This rule is also why LSU has been able to wear white uniforms at home. The rule did not require the home team to wear a colored jersey, just that the road team must wear a contrasting color.

The wording of the rule was also designed to benefit the way the game was covered in the past, with contrasting uniforms making it easier to tell the difference between players and teams in black-and-white photos and TV broadcasts. Clearly the game and the way it has been covered has evolved and this concern has been greatly diminished in an age of 1080p picture on TV and digital photos. If we want a black-and-white photo, we can handle that in Photoshop and Instagram.

The rule was eventually challenged by former USC head coach Pete Carroll. Rather, Carroll spat in the face of the rule. It was in 2006 when the former Trojan head coach began to open the discussion about reviving the home jersey tradition with UCLA. Karl Dorrell, UCLA’s coach at the time, was intrigued by the idea, but it was Rick Neuheisel in 2008 who helped Carroll follow through on rekindling the tradition. With UCLA hosting the 2008 game in the Rose Bowl, Carroll brought his Trojans in their home uniforms knowing he would have to forfeit a timeout as a penalty according to NCAA rules. Neuheisel, in a show of good sportsmanship to help keep the tradition going, agreed to spend one timeout of his following the USC penalty. Thus, the tradition was revived.

The home uniform tradition continued for two more years before Neuheisel inexplicably ended it by having his Bruins wear road uniforms for the 2011 game in the Coliseum. Instead, UCLA opted to wear its alternate all-white uniform combo, complete with white UCLA helmet. Perhaps as an act of punishment by the college football and uniform gods, UCLA was beaten down by a score of 50-0 on its way to the Pac-12 Championship Game… a game the Bruins played only because USC, the leader in the Pac-12 South standings that season, was ineligible due to NCAA sanctions. 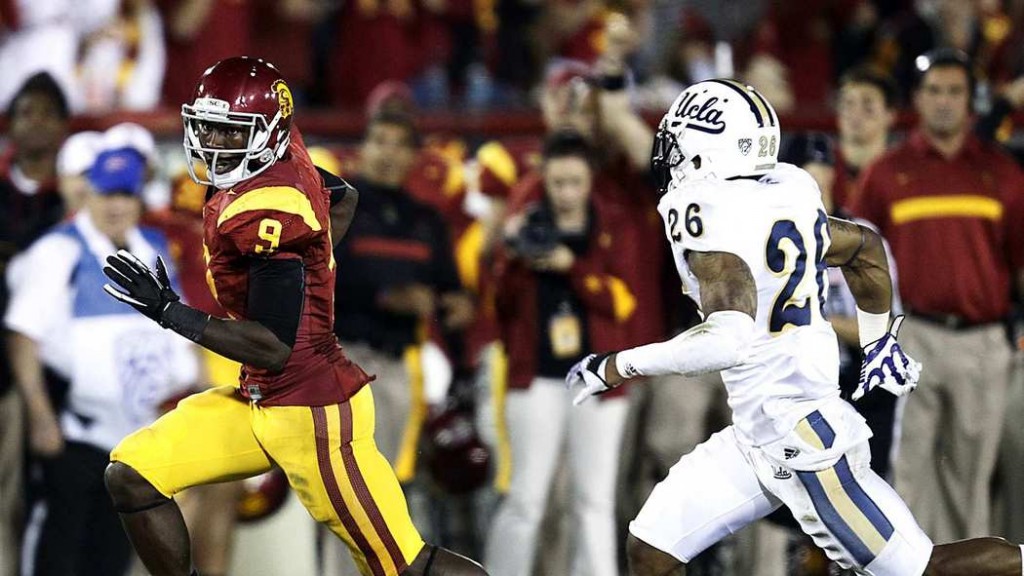 The following season, back in the Rose Bowl in 2012, UCLA stuck to its traditional home look and USC suited up in its home uniforms once again. By now the NCAA had adjusted its rules regarding uniform choices, allowing road teams and home teams to agree to allow for uniforms like this in any particular game without penalty. As we saw last year in the Coliseum, the Bruins saw the error in their ways with their 2011 attire. UCLA wore its normal home look, and the college football and uniform gods combined to reward the Bruins for holding up their end of the tradition. UCLA pounded the Trojans, 35-14, for the first road win by the Bruins in the series since 1997. The lesson? Do not anger the uniform gods, UCLA. 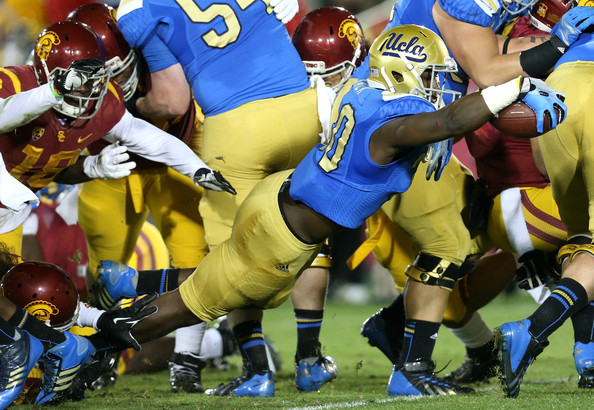 Maybe USC will bring out the reflective chrome helmets, and that would be far from a terrible uniform offense. Personally, if USC wore a matte finished helmet, I think it would be pretty sharp. Now if we could just be guaranteed to see UCLA wear this number font style, we could call it a day.