Many endeavors in life require the ability to walk a fine line without losing one’s balance. Human work is, at its heart, a matter of effort and energy poured into a task, but if that work is more complicated than shoveling dirt or mopping a floor, it will often be imbued with a need to be politically palatable to one’s bosses or artistically appealing to a wider audience (or both). Being practical and creative; functional and aspirational; effective and stylistic — work at a higher level will often balance these needs, and it’s up to executive decision makers to shape the vision that’s best for a specific group of workers.

Late Saturday night, just when the Eastern time zone gained one hour, Utah head coach Kyle Whittingham made a conscious choice in his line of work: As much as he might have liked an artistic victory over the Arizona State Sun Devils, he ultimately felt that what was best for his football team was to try to win with the lowest possible score.

If you watch enough sports — especially enough college football — you can tell if one team is trying to play a game a certain way. In the American League playoffs, you knew that Kansas City Royals manager Ned Yost was trying to play for one run in the middle and late innings of close games. He tried to beat the Los Angeles Angels, 2-1. He tried to beat the Baltimore Orioles, 3-1 or 3-2. His hitters occasionally busted loose to create higher-scoring games, but Yost valued the single run in the middle and latter innings more than many of his American League contemporaries, because he had the back-end relief pitchers who could make one extra run stand up.

So it also was with Whittingham and Utah late Saturday night in the desert: The Utes played to win this game by a 16-13 score. Everything they did — everything Whittingham chose to do over the course of this game — pointed to a desire to win a defensive game, holding Arizona State in check instead of looking for the big offensive play to bust the game wide open.

Even in the first half, well before the endgame sequence, Utah played this game with its defense in mind. Whittingham, regardless of how you might otherwise evaluate his decisions, was quite consistent, something a coach deserves credit for.

Just before halftime and trailing 13-3, Utah gained a first down at the Arizona State 23. The Utes had a little over 35 seconds from the 23 to possibly get a touchdown and move within only three points (13-10). They ran the ball three times and settled for an Andy Phillips field goal to take a 13-6 deficit to the locker room at halftime. Even then, Whittingham communicated the message to his team: “We’re not going to get greedy. We are intended to shut down Arizona State’s offense. We’re going to play this game on our terms and shape this game the way we want to.”

Whittingham’s approach was psychologically astute — his defense very nearly did shut out Arizona State in the second half.

Getting a great pass rush up the middle, the Utes bullied the Sun Devils’ offensive line and ensured that ASU quarterback Taylor Kelly — who had missed three games over the previous six weeks due to an injury suffered in September at Colorado — would have a hard time adjusting to the speed of the contest. Indeed, Kelly — though ASU’s best quarterback on merit — has not been the same player he was before his injury. Kelly has yet to look like the quarterback who led ASU’s turbo-charged offense (“high-octane” in the world of Sun Devil coach Todd Graham) to such pronounced heights last season.

Give Whittingham credit: His decisions helped make his defense play as well as it did, and when his defense is at its best, it’s true: Utah is also at its best. Whittingham did have his defense supremely prepared to play one of the tougher offenses in the Pac-12. On many levels, Whittingham undeniably coached a great game on Saturday night. Moreover, when one realizes that Utah defenders dropped two can-of-corn interceptions in the fourth quarter of this game, Whittingham can tell reporters and his own players: “Guys, if we make just one of those two interceptions, we win. Our plan was the right one.”

In fairness, that has to be acknowledged.

However, in this attempt to balance the pratical and the aspirational in work, Whittingham must confront one powerful countervailing reality: In college football, the perfect scenario doesn’t usually happen. Young men make innocent mistakes. There generally has to be at least some allowance for plot complications.

This is, in other words, the problem a coach must face when he tries to win a game, 16-13, and doesn’t trust his offense to make plays. If anything less than the perfect scenario occurs, the roadmap can lead to ruin. This is what happened to the Utes in the Valley of the Sun and its Devils, who played well below their best but somehow managed to leave Sun Devil Stadium with the lead in the Pac-12 South. 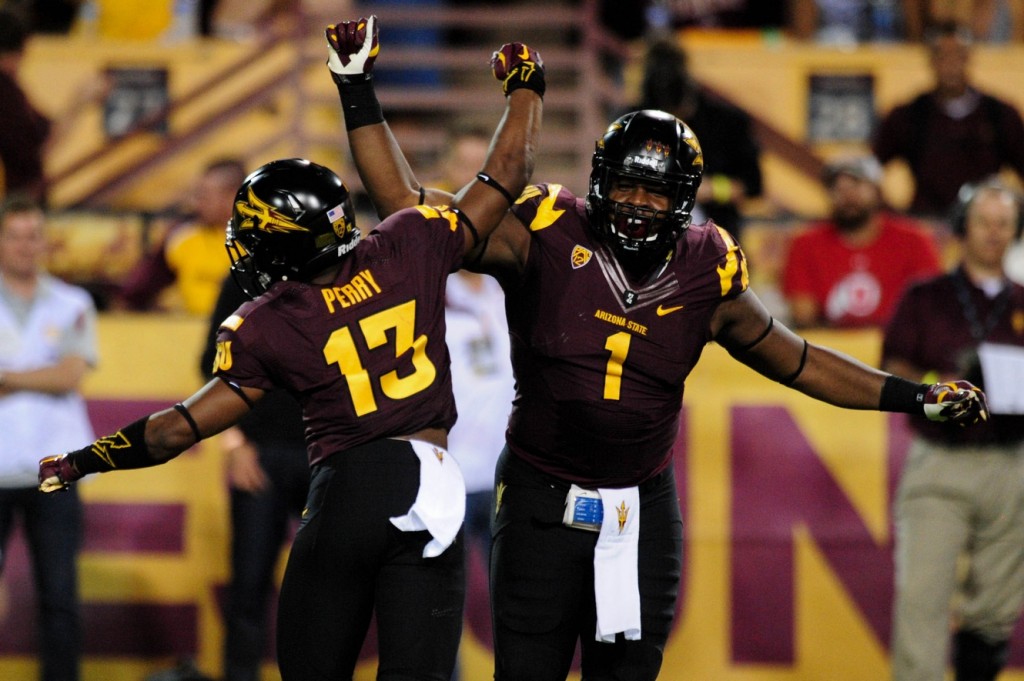 Arizona State’s offense was pancake-flat for most of Saturday night’s game against Utah. The Sun Devils repeatedly killed themselves with penalties. Yet, two dropped interceptions by Utah’s defense in the fourth quarter enabled the Sun Devils to get into overtime. Utah kicker Andy Phillips missed a field goal, and the rest was history.

As this game moved into the fourth quarter, you could see that Whittingham was adhering to the same line of thought shown at the end of the first half. He continued to shorten the game and aim at a 16-13 win.

Facing third and 11 with over nine minutes left, leading 16-13, Utah completed a three-yard pass and happily punted. The Utes were content to bleed the clock. However, then came the moment Whittingham hoped would never happen.

With Arizona State facing third and seven at the Utah 13, a perfectly-timed blitz from the Utes crashed through the Sun Devils’ offensive line. Kelly panicked — instead of gunning the ball out of bounds or through the back of the end zone, he lofted a tentative pass into traffic just inside the Utah 5. The ball hit the hands of a Utah defender, but it wasn’t secured, and it fell harmlessly to the ground. Whittingham was banking on his defense to make an interception there, and when ASU kicker Zane Gonzalez banged in a 30-yard field goal to tie the score at 16 with 5:47 left, Whittingham lost his desired scenario.

Until that point in time, Whittingham had structured the game just the way he wanted to. Now that his offense had to score again, though, the Utah coach needed to trust quarterback Travis Wilson to make a few plays… the plays that emerged on a game-winning fourth-quarter drive against USC the week before.

Yet — and this is where Whittingham and offensive coordinator Dave Christensen deserve considerable criticism — Utah continued to play not to lose even after Arizona State had tied the score. Just absorb that truth: The Utes continued to avoid risk-taking even after their three-point lead had vanished.

With just over three minutes left and facing third and seven from the Arizona State 41, the Utes — locked in a 16-16 tie — knew that if they could just get one first down, they’d get into field-goal range at the Sun Devil 34 or any place farther down the field. Phillips had already made all three of his field goal attempts in the contest, pushing his season stat line to 17-of-19 on field goals. Phillips was close to automatic, but Utah needed to get that one first down in order to put itself in position to win.

On that third-and-seven play, the Utes chose a running play which gained no yards. Phillips never got a chance to win the game in regulation. He was only given the grim task of kicking a field goal on the first possession of overtime, a kick which does not so much give a team a lead as it simply prevents a team from being in the awful position of scoring no points. First-possession field goals in overtime are never sought; they need to be made not to achieve a victory, but to avoid a loss. (Second-possession field goals when the opponent fails to score on its first possession in overtime? Those are different — those kicks do achieve instant victory and therefore carry a different psychological weight.)

Phillips caved under the pressure, missing a 35-yard boot moments after a previous miss was wiped away by a Utah timeout.

Gonzalez, who had matched Phillips in field-goal proficiency to that point in the evening, finally eclipsed his accomplished counterpart by knocking in a 36-yarder on ASU’s subsequent possession. Utah’s plan to avoid losing — more precisely, to avoid doing something wrong and reach the finish line solely by forcing Arizona State into mistakes — was executed quite well for most of this night in Tempe, Ariz. However, dropped interceptions and an appalling failure to pass the ball near the three-minute mark in regulation caught up with Kyle Whittingham.

Utah has still overachieved this season, but now, it will very likely have to settle for something less than a Pac-12 South championship. With games against Oregon, Stanford and Arizona looming, a division title will be very hard for the Utes to attain in the weeks ahead.

Say this much for Utah: If it’s going to pull off that feat, it will probably need to play to win, as opposed to playing not to lose.