There was a lot more to process from the past weekend than the emergence of some very tantalizing end-of-season hypotheticals. Yesterday, we talked about 11-1 TCU versus 11-1 Baylor. We tossed around a playoff scenario pitting the Big 12 against the SEC West. We discussed the Big Ten going up against the SEC West under a particular set of circumstances. All those hypotheticals are hot conversation topics.

However, there’s also a sport on the field to process: How did teams, programs and coaches develop — or regress — in the heat of late-season competition? That’s what we’ll discuss today at The Student Section. Editors Bart Doan and Matt Zemek offer their thoughts on Showdown Saturday.

What’s the most important thing you learned from this past Saturday’s six matchups between top-25 teams?

Empirically, it was obviously the culling. Six matchups between top 25 teams don’t really tell us anything collectively, but everything individually. I’m not a “broad stroke” type of fellow when it comes to stuff like college football.

To me, it means six teams at minimum eliminated themselves from playoff consideration for the most part. Individually, that’s where we learn plenty. Notre Dame is just a turnover keg party. It DOES NOT tell me anything about Florida State, and let’s stop acting like it does. Different week, different venue, different set of circumstances.

It told me about Arizona State and how good the Sun Devils have become on defense after basically parting the Red Sea for UCLA earlier in the year. Teams can, actually, improve over the course of the season.

It told me Michigan State actually can get pushed around in its backyard. To this point, Sparty was like Debo in “Friday.” You come around his block, and you just hope you get out of there without too much damage done.

Well, Ohio State went all Ice Cube on them with everyone standing around the street watching, mouths agape. “And you know this maaaaa’aaaan.”

It told me Alabama has also improved, and the Tide have a real shot to be the team that comes out of the SEC in spite of being saddled with so many questions from onlookers early in the year.

It told me Auburn didn’t have enough on offense to offset the fact that the Tigers have had a mediocre pass rush and average secondary all season long. They’re no longer a contender after losing to a Texas A&M team that has had trouble defending its own shadow all season.

It told me Baylor is a legit threat, and shouldn’t be taken so lightly. It told me, with TCU winning as well, that we really could see two 1-loss Big 12 teams, and if only they’d played one another … oh wait, they did.

From more of a non-concrete perspective, it was sort of a picture of how the college football season will look going forward with this playoff system. These are all “playoff games to get into the playoff games.” It’s not quite the fever pitch of “every week is the playoffs” that the BCS sort of had a monopoly on, but it showed that the weeks can be awfully interesting and the more of these Saturdays we have, the better. Just, if we could spread the games out a bit, thanks. 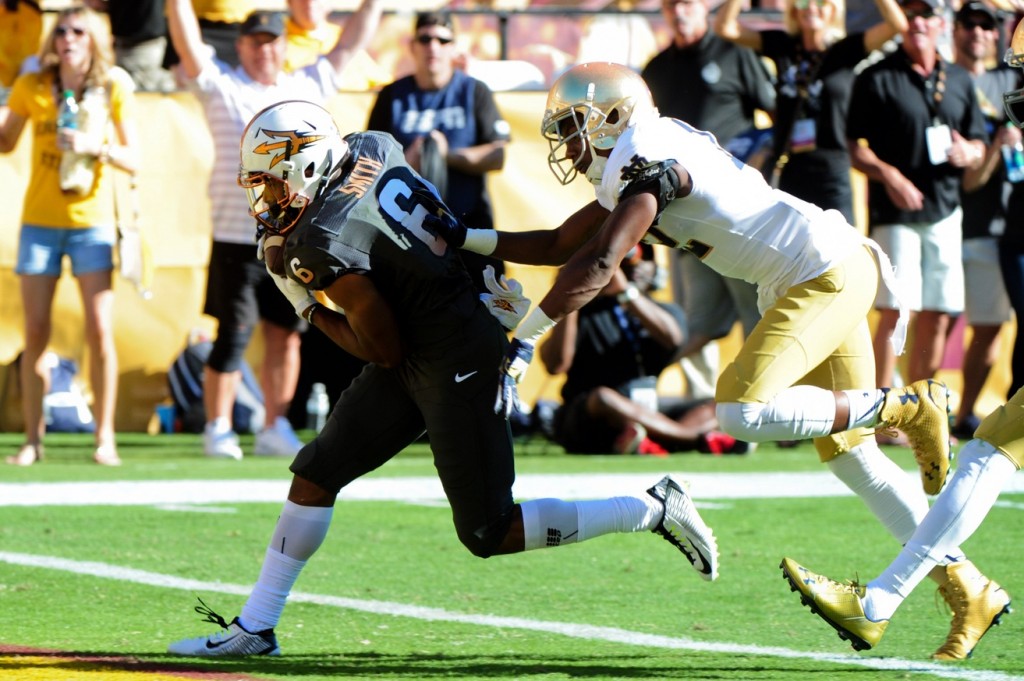 Arizona State was a step ahead of Notre Dame for most of a warm Saturday afternoon. Being inhabitants of the desert, the Sun Devils knew how to handle the heat when Notre Dame uncorked a 28-0 run and came close to pulling off an all-time comeback. Arizona State has often allowed big games to slip away over the years, which is why the Sun Devils’ ability to stabilize themselves in the final 6:37 of Saturday’s game showed that they’re made of sterner stuff. ASU’s new identity has been shaped in large part by head coach Todd Graham.

I learned several important things from Saturday: J.T. Barrett of Ohio State is a ready-for-prime-time player. Braxton Miller could not have played any better than Barrett did against Michigan State on the road at night.

I learned that TCU and Trevone Boykin have the ability to not only move past a crushing loss (Baylor), but a gutsy road win accompanied by a long commute (West Virginia).

I learned that the SEC West’s reputation is trending downward (Auburn’s mistakes, the Alabama-LSU slopfest).

However, one epiphany stood above the rest on Showdown Saturday, and it comes from Tempe, Arizona: Arizona State gives every appearance of being a program that’s here to stay.

As I wrote in our coverage of the Notre Dame-Arizona State game on Saturday, there were several thousand empty seats in the upper deck of Sun Devil Stadium. Those empty seats were a product of decades of heartbreak in a big game. Stanford cut out ASU’s throat last December in the Pac-12 Championship Game, and that was merely the latest in a very long line of numbing big-game defeats Los Diablos del Sol have absorbed since the early 1980s, when archrival Arizona (in 1982) began a nine-game unbeaten streak in the nasty Territorial Cup rivalry. Even when Arizona State finally reached (and won) its first Rose Bowl in the 1986 season under John Cooper — a coach who, as Ohio State fans know, continued to struggle in rivalry games once he left Arizona State — the Sun Devils lost to Arizona. This is the kind of dark cloud that has hovered over the ASU program.

The Sun Devils occupy a part of the United States which has steadily grown in population over the past 25 years. Phoenix has grown by leaps and bounds since the late 1980s. The weather in autumn should be a natural magnet for recruiting. Proximity to both California and Texas should make Arizona State a player on the national scene. Frank Kush took the program to a No. 2 end-of-season ranking following the school’s greatest win, a takedown of Tom Osborne’s Nebraska Cornhuskers in the 1975 Fiesta Bowl. Ever since Kush was forced out of power in 1979, though, what had been a burgeoning colossus has largely fallen asleep, waking up only once every several years: 1982, 1986, 1996, 2007.

When Todd Graham came to Tempe with a sullied reputation and Pittsburgh fans rightly being appalled at what they had just seen, Arizona State was indeed a sleeping giant. The program was waiting for the right coach, but Graham’s penchant for quick exits and upward moves on the coaching ladder suggested that stability was not going to be part of the Sun Devils’ immediate future.

Well… that claim has to be revisited now, doesn’t it?

What’s most amazing about this season for Arizona State is how utterly clueless Graham’s defense in fact was on that September Thursday night against UCLA. If ASU’s defense could have been likened to a single person, and a pizza delivery man came to that person’s door holding three pizzas in one arm while carrying a bag of two-liter bottles of soda in the other, ASU’s defense would not have been able to tackle that delivery man. That’s how awful the Sun Devils were on defense against UCLA.

On Saturday against Notre Dame, and actually for the past month, ASU has been carried along not by Graham’s “high-octane” offense — that’s been rather low-octane, to tell the truth — but his defense. ASU is winning with a style that’s substantially different from what we saw a year ago. When coaches can adjust to the disruption of a talented quarterback’s career — Taylor Kelly has not been the same player he was in 2013 — while also dealing with the loss of a boatload of defensive starters, they offer proof that they can stick around at the highest level.

Todd Graham has been a revelation this season, a point reinforced in this fine piece of commentary from Michael Weinreb in Rolling Stone magazine. Arizona State might have found its next great coach. A giant shows signs of awakening — and staying awake — in the Valley of the Sun.