Of the two games in party cities, one will feel like something of a re-run, though not completely: Nevada will be new to the New Orleans Bowl, but Louisiana-Lafayette will make its fourth straight appearance in the Superdome. If you like your bowl meals fresh, the Ragin’ Cajuns won’t be able to take your order this year.

It’s the game in the other party city — Las Vegas — which rises to the top of the list on day one of bowl season.

Saturday’s menu of five games is comprised of three games with mostly local meaning and two that are compelling on a national scale. One of the two five-star matchups is the “Seven-Win Improvement Club Bowl,” also known as the Famous Idaho Potato Bowl between Western Michigan and Air Force. Western Michigan won once in 2013 and has won eight times this season. Air Force won twice last year and has won nine times this season. This isn’t Super Bowl XXXIII in 1999, but Broncos-Falcons should be a compelling watch.

The biggest game on Saturday, however, is the one Brent Musburger will call for ABC at 3:30 Eastern.

You are looking liiiiiiiive… at the Las Vegas Bowl, where you can dispense with the notion that all pre-Christmas bowls mean very little. If ever a pre-Christmas bowl meant a huge amount to two programs, this is it.

Both teams share the common pursuit of winning a bragging-rights battle in Sin City, since the Rams from Fort Collins and the Utes from Salt Lake City both shared space in the same conference once upon a time. Colorado State and Utah both locked horns in the Mountain West, and with Utah moving to a Power 5 conference (as did TCU, and as Boise State appeared to have done before the deal fell through), this matchup is imbued with a special and evident resonance on both sides. Colorado State wants to show it belongs; Utah wants to affirm the superiority of its new home in the Pac-12.

The first thing you have to remember about Utah’s season is this play: 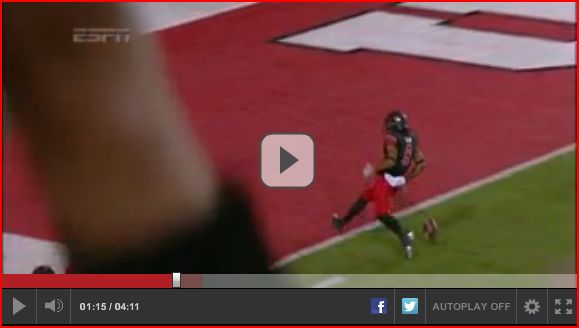 What if this moment had not occurred? What if Kaelin Clay had not DeSean Jacksoned against Oregon? Utah’s season was certainly a lot better than the previous two, but it still fell short of its potential. The haunting portions of a bounce-back season make this Las Vegas Bowl such an important moment for Utah and coach Kyle Whittingham.

The Utes, 5-7 in each of their previous two seasons, did a lot of good work this year.

An attacking defense so prolific in tackling the quarterback for a loss that it became known as “Sack Lake City” carried Utah to an 8-4 record. For much of the 2014 season, fans and pundits remembered why Kyle Whittingham had left such a strong and positive imprint upon the college football world. National observers noticed at times the same aggressive identity which was so much in evidence when the Utes hammered a Nick Saban-coached Alabama team in the 2009 Sugar Bowl.

That was not a friendly environment for the Utes, you might recall: They were venturing into the South and the Superdome. It didn’t matter — they made themselves right at home and played a letter-perfect first half, ripping through the Tide with scary precision. Utah’s defense was a wrecking crew in that game, and in 2014, a measure of that old feeling returned to the Utes, who defeated both UCLA and USC to earn ample respect in a contentious Pac-12 South. On many levels, Whittingham reaffirmed the better aspects of his reputation, restoring some of what had been lost in 2012 and 2013.

Yet, for all that Utah did in fact achieve this season, there was — and is, and always will be — an undeniable shadow which will lurk over the journey. This easily could have been a 10-2 season at worst, possibly an 11-1 season with a chance to play Oregon in the Pac-12 Championship Game.

The Utes somehow gacked away a 21-0 lead at home to Washington State, a team which did not make a bowl this season.

The Utes outplayed Arizona State but sat on a three-point lead for much of the fourth quarter instead of making a more robust attempt to win the game. Arizona State tied Utah, sent the game into overtime, and won on what essentially amounted to penalty kicks (making its field goal after Utah missed).

Then came Kaelin Clay’s boneheaded moment against Oregon. It’s true that since Heisman winner Marcus Mariota and the Ducks sped away from the Utes in the second half, it’s not reasonable to say Utah should have won the game. However, everyone on that roster and coaching staff will always wonder what might have been had the memory of DeSean Jackson (and others) not been invoked in Salt Lake City on Nov. 8.

This bowl game gives Utah a chance to play a team that actually did win 10 games this regular season. The Utes have been offered the saving grace of a quality opponent instead of a downmarket team that would not allow Utah to burnish its resume. A win in Las Vegas will enable Utah to say with some credibility that it made substantial, not just moderate, advances in 2014. 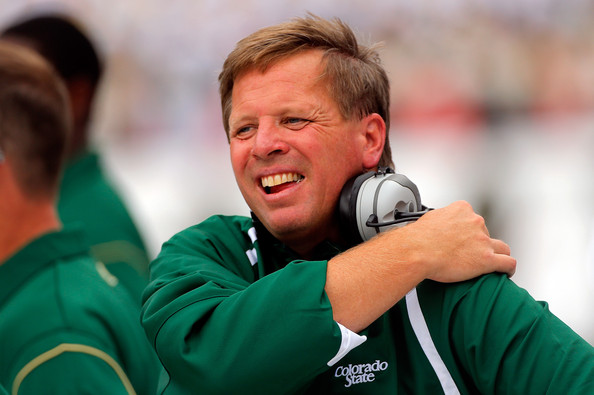 New Florida coach Jim McElwain won’t coach his former team in the Las Vegas Bowl, so it’s up to Colorado State’s players to want to show their former leader — and the nation — what they’re made of.

For Colorado State, the calculus isn’t quite as complicated, at least to the extent that one doesn’t need to explain the Rams’ situation in great detail. However, a lack of complexity doesn’t mean that CSU lacks urgency heading into Vegas. Anything but.

If you recall last year’s Las Vegas Bowl, USC took the field at Sam Boyd Stadium with Ed Orgeron no longer a part of the program. USC had made the decision to move on without “Da Coach O,” a move the players hated. This raised the possibility that the Trojans would sulk, a possibility made that much more real because USC did indeed grumble all through its desultory 2012 Sun Bowl debacle against Georgia Tech. However, USC’s players performed with pride against Fresno State. The result was a 45-20 beatdown which was not as close as the final score indicated.

Colorado State has a chance to make that same kind of statement on Saturday, under slightly different but fundamentally similar circumstances.

The Rams won’t have the coach they have come to depend on over the past three seasons. Jim McElwain molded Colorado State into a winner, turning drift into determination and confusion into confidence. The Rams beat a “better-than-its-record” Boston College team in New England and had a shot at the “Gang Of Five” New Year’s Six bowl slot for much of the season. Their dream didn’t die until Nov. 28, when Air Force nipped the Rams at the wire. Colorado State wants to show that it can apply the lessons McElwain imparted to the team. No, Ed Orgeron did not leave USC so much as he was forced out, but the larger reality of being without an admired head coach is the common thread uniting the 2013 Las Vegas Bowl with the 2014 edition. Colorado State wants to prove a point, while also telling the new coaching candidates on the market that they’ll have a lot to work with in 2015.

There’s one other simple reason this game means a lot to the Rams: Their two losses came within the Mountain West Conference, to Boise State and Air Force. Playing Utah — a former Mountain West team now carrying the banner for a Power 5 conference — gives CSU the chance to bolster its standing as a team that can beat quality opponents in its own region of the country. The win at Boston College carried some value, but if Colorado State goes 0-for-3 against Boise State, Air Force, and Utah, a 10-3 season — for all it did achieve — will be tinged with some frustration.

When you examine the backdrop to the Las Vegas Bowl, you are looking liiiiiiiiiiiiiive… at two teams with a lot to prove.

Reputations aren’t always profoundly affected by bowl games, at least not in equal measure. South Alabama’s reputation does not hang squarely in the balance in Saturday night’s Camellia Bowl, for instance. Louisiana-Lafayette’s rep won’t take a tumble if it loses a New Orleans Bowl for the first time in four tries. UTEP’s reputation won’t take a big hit if the Miners lose the New Mexico Bowl.

Colorado State and Utah? Yes, this bowl means a little more than the others on Saturday. If Brent Musburger treats this game like a big deal, he won’t be treating the Las Vegas Bowl with an improper sense of proportion.