This has been a great week in American sports on numerous levels.

The Kansas City Royals and Baltimore Orioles — two franchises that made the Major League Baseball postseason every year but once in a nine-season span from 1976 through 1984 — are now one win apiece from meeting in the American League Championship Series. Both franchises stood in the shadow of the New York Yankees in the latter half of the 1970s before fading from the scene in the late 1980s. The revival of the two ballclubs shows that with patience, all aspirations can become realistic, all dreams can become achievable. This riveting week in baseball has injected fresh life into two fan bases that, for the past 25 years, have known little other than heartbreak.

While most American sports fans were watching the Royals take a 2-0 series lead on the Los Angeles Angels Friday night, a college football team set about the task of trying to rebuild its own identity, to make that climb from relative obscurity back to a place of prominence it attained 30 years ago, at the end of the very same era of excellence created by the Royals and Orioles. 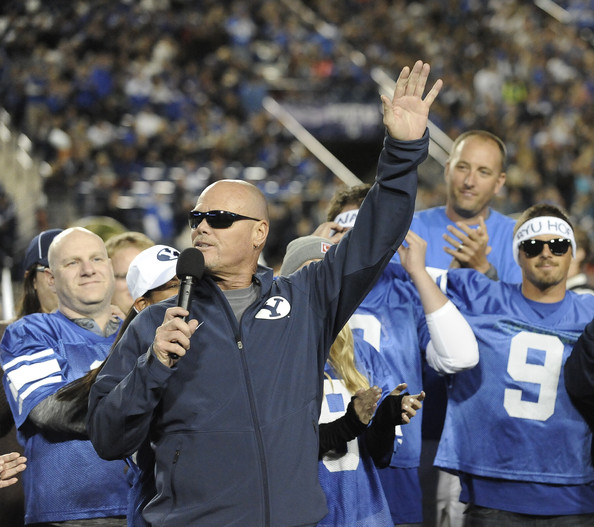 The fact that former BYU quarterback Jim McMahon was honored by the program this past week was symbolically representative of the school’s desire to climb back to the mountaintop in the college football world. The injury to current quarterback Taysom Hill, combined with a highly ineffective performance on defense, caused BYU’s dreams of greater gridiron glory to evaporate in one encompassingly awful evening.

Indeed, when the Royals were still in their heyday and Baltimore was still a baseball force to be reckoned with, BYU football claimed a stunning national championship in 1984. When the Royals and Orioles were both great at baseball, BYU began the string of Holiday Bowl appearances (and classic games) that put the program on the map under head coach LaVell Edwards. One of the many great college quarterbacks Edwards produced was Jim McMahon, whose No. 9 jersey was placed on permanent display in BYU’s home stadium, the one bearing Edwards’s very name, during halftime of BYU’s game against Utah State. It was McMahon who produced one of the iconic moments in BYU football history, shown midway through this video:

For this reason, it was entirely appropriate for the program to recognize McMahon, even though his personality and mannerisms could not be more different from those of Steve Young and other legends who came of age under Edwards. Plenty of Americans tut-tut whenever BYU’s honor code comes up for discussion (recall the case of basketball player Brandon Davies a few years ago), but McMahon’s well-deserved victory lap showed how expansive and embracing the school can be:

I love that the BYU Hall of Fame is inclusive enough to honor both Young & McMahon — two men whose similarities can be counted on one hand.

You can begin to sense the feeling in the air among BYU fans before kickoff on Friday night against Utah State.

BYU entered this contest in an uncomfortable in-between place as far as college football’s larger power structure was concerned. The Cougars were not likely to make the College Football Playoff, and their status as an independent was not seen or recognized in the same breath as college football power broker Notre Dame. The Cougars knew that they were also unable to gain the automatic bid among the so-called “Gang Of Five” group of teams (the five non-power conferences), whose best representative gets a slot in one of the six New Year’s Day bowls at the top of the larger bowl structure.

Here was a program, standing at the beginning of October with an unblemished record against a manageable schedule, thinking it had a chance to rejoin the elite. An unbeaten season was exactly how BYU could climb back to the top and announce to the rest of the college football community that, yes, it was worthy of being seen in the same light as Notre Dame. BYU was in position to show that its independent status wasn’t an impediment to larger and greater goals.

The program was honoring its past and one of the men who made it come alive. A unique mingling of pride in a program’s rich heritage; surface-level optimism about the current season; and a subterranean worry about being denied due recognition on a national level all pervaded the BYU fan base. Joy and hope entered LaVell Edwards Stadium, partly because star performer Taysom Hill would start at quarterback for the Cougars; partly because Utah State, a 21-point underdog, was expected to receive a thumping; and partly because this really did seem to be the year in which a 12-0 season was possible, giving the school a taste of 1984 and a national media blitz in late November and early December.

Entering Friday night’s game against Utah State, the Brigham Young Cougars carried no assumptions about their future, but from the Jim McMahon ceremony to Utah State’s weakened condition — due to the loss of snake-bitten, injury-hounded quarterback Chuckie Keeton — BYU was staring at a horizon filled with possibilities. The Cougars, up and down their roster, had every reason to believe that this would not be a night when all their foremost dreams would die such a cruel death on home soil.

Then this happened late in the first half:

Video of the Taysom Hill injury, if you're not squeamish: #espn http://t.co/N5O7yhQSTw

Yes, it didn’t help that Utah State backup quarterback Darell Garretson played a virtually flawless game, hitting 19-of-25 passes (76 percent completions) for 321 yards and three touchdowns with no interceptions, lighting up BYU’s secondary with deep and long-intermediate darts. It didn’t help that BYU’s defense stood powerless before an offense it expected to contain. Yes, it didn’t help that when Hill was on the field in the first half, BYU’s offense scored only 14 points and failed to take control of the game from the jump. Yet, when Hill went down with a fractured leg, effectively ending his 2014 season, everyone in Provo knew that BYU’s dreams — not just for one year, but for the foreseeable future — were dead.

There was no great lesson to be learned, no hopeful subtext to be found. The injury to the program’s best and foremost player simply cast a pall over the rest of the proceedings on Friday, reminding BYU fans that for all the riches the school once attained on the gridiron, that time belongs to the past, a past which becomes ever more distant from the present. Independent status feels that much more like a noose. The hope to attain Notre Dame-level weight as an indie is ever more remote.

A week that meant so much to BYU, one that dipped into its proud football history, began with this glorious and sweetly touching image:

It ended with Taysom Hill on crutches, left wondering when BYU’s next peak moment will arrive in the shadows of the Wasatch Mountains.

This was a largely great week in American sports, seen chiefly through the prism of two baseball teams that have revived themselves after being largely dormant on a national scale since the early 1980s.

BYU wanted to join the Baltimore Orioles and Kansas City Royals as a sports team that could turn back the clock 30 years or so, to a time when all riches and rewards stood fully within its grasp. Instead, with Jim McMahon watching, the hope of resurrection turned into rubble.

You might have thought Oregon suffered a program-shattering loss on Thursday night against Arizona.

What BYU suffered against Utah State was 100 times worse.

So much about this week in American sports provided sunshine and light. The Cougars’ story reminds us, though, that while some teams and fan bases get to laugh and dance in the sun, others remain shrouded in darkness. Such is the case for BYU, a school that hoped for the world, only to see that world come crashing down in four viciously painful hours on Friday night.