The number one team in the United States, playing at home in November against an opponent without a single win in its conference, was taken to the final half-minute of regulation.

Just let that fact sink in.

Yet, how many people other than Mississippi State and Arkansas fans (or the journalists assigned to this game) saw most of the snaps in this contest, or even a third of them?

While most of us watched Auburn-Ole Miss and caught portions of Oregon’s win over Stanford, No. 1 Mississippi State barely held on against the Razorbacks. It’s odd for a No. 1 team to play and close game and yet fly under the radar in comparison to another game in its same time window. Yet, that was largely the case on Saturday.

What’s to be made of Mississippi State’s close shave? The Student Section editors weigh in.

Mississippi State sits in uncharted territory late in the season. The Bulldogs finally showed some cracks in barely getting by Arkansas, a team without an SEC win. Is that a sign of the pressure starting to get to the Bulldogs, or did they simply overlook the Hogs a bit?

What’s the answer to this question?

Arkansas’s passing game is so bad that Mississippi State should not need 60 full minutes at home to fend off the Hogs. It’s hard to refute the contention that this game was not, at least in part, a result of MSU feeling the heat as it plays for very high stakes. We all saw how feeble Kentucky is against Missouri this past Saturday. Mississippi State struggled to put away that team, so it’s fair to say that the Bulldogs are wobbling a bit.

Yet, while this moment is new for the Bulldogs, the “overlook” angle gains credence when looking at both Dak Prescott and Josh Robinson. They ran over, around, under, and through LSU in Baton Rouge at night. (Yes, LSU hadn’t turned the corner, but the display was still so physically impressive that it deserves to be appreciated as such.) It could very well be the case that Mississippi State is saving mental energy for Alabama. I imagine Dan Mullen isn’t trying to push his team too hard or harp on shortcomings; he knows there are bigger battles ahead.

One thing that’s important to point out when doing an “overlooking” answer is that for the most part, it’s restricted to the emotional play of the game rather than the prep work going in.

Nothing makes me cringe like a reporter asking to a coach if the team and staff “overlooked” the opponent, because prep work-wise, it’s just not the case. You don’t shuck off practice and spend 20 hours on Arkansas and 60 on Alabama or whatever.

The “overlooking” comes from a natural, emotional standpoint. As coaches, it’s the job to put the same effort, intensity, and prep into every opponent. They don’t pay you to work half-time certain weeks. But when factoring in, by comparison, top-five Auburn coming in as opposed to SEC-winless Arkansas, yeah, there’s naturally a little less of a buzz around the entire campus. Remember, a college football team is a small community.

So without getting too long, yeah, I think MSU overlooked Arkansas emotionally, especially after seeing its name at the top of the CFB Playoff committee poll, and after some of the big games they Bulldogs have won over the last few weeks.

Does it mean anything other than one game? Nope. It’s a great teaching moment about how every game, every moment, is important if you want to win a championship at anything.

However, it does help you realize that MSU will have to deal with this from here on out. When you’re on the doorstep of becoming legendary, that’s part of the deal. When you’re doing it for the first time, it can’t be easy. 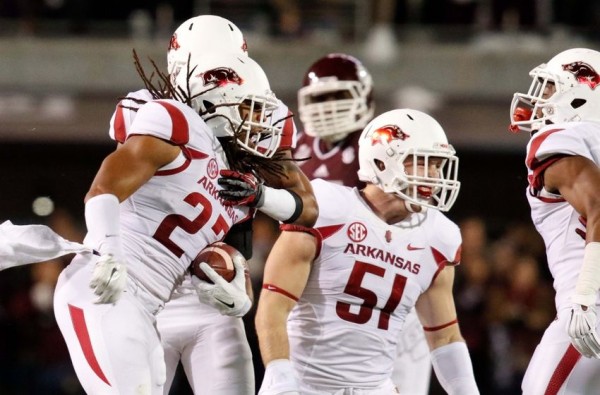 Arkansas pushed Texas A&M before the Aggies disintegrated. The Razorbacks lost to Alabama by the margin of a missed extra point and botched a field goal during that 14-13 defeat. This is a team that has played strong opponents on even terms this season. Don’t be so quick to say that Mississippi State overlooked the Hogs.

Neither one of these things happened to Mississippi State on Saturday night. The Bulldogs’ struggles came from other sources.

The biggest reason Dan Mullen’s squad had trouble this weekend was the Arkansas Razorbacks. Let’s be honest: the Hogs are a much better team than people realize. Yes, Arkansas hasn’t won a conference game since 2012. However, the Razorbacks have had several close calls along the way, including an overtime loss to Texas A&M and a one-point loss against Alabama, which many people feel is still the best team in the SEC West.

Another contributing factor to Mississippi State’s relatively underwhelming win was its schedule. In the last four games the Bulldogs have faced LSU; a Texas A&M team with a confident Kenny Hill running the offense; Auburn; and a much improved Kentucky squad that’s on the the verge of a bowl bid. Playing that type of competition week in and week out takes its toll over the course of a 12-game season.

However, neither the underrated Hogs nor the brutal schedule seemed to faze the Bulldogs one bit. After falling behind 10-0 in the second quarter, MSU shut out the Hogs over the final 41 minutes of the contest, including a dramatic pick by Will Redmond with just 15 seconds to play. While the margin wasn’t as big as people expected, Dak Prescott did roll up a career-high 331 yards passing, highlighted by a 69-yard strike to Fred Ross that turned out to be the game-winner.

That hardly sounds like a team that’s looking ahead or feeling the pressure of being No. 1.

In fact, that type of resilience is the very thing champions are made of.