When the Wisconsin Badgers host the Minnesota Golden Gophers on Saturday, a lot more than Paul Bunyan’s Axe will be at stake. Such is the transformed nature of this game, thanks mostly to the ability of Jerry Kill to lift the Gophers to an even higher level. Wisconsin expects — and is expected by pundits — to play for division and conference championships. That Minnesota has been able to make this contest a winner-take-all tilt in the Big Ten West is a testament to the life Kill has instilled in his program.

Yet, while Minnesota has — in a very real sense — made this moment by unexpectedly rising to the top tier of the Big Ten West, the gravitational center of Saturday’s showdown remains Wisconsin. The Badgers have the running game which could test Ohio State in the Big Ten Championship Game. The Badgers have a history of performing well in Indianapolis on the first Saturday of December. The Badgers own more status and cachet in a present-day college football context. (Minnesota, thanks to its national championships in the 1930s under head coach Bernie Bierman and then in 1960 under Murray Warmath, is the program with a much greater historical standing.)

As these teams prepare for Saturday’s fateful, final Big Ten West game in 2014, all eyes will be riveted to Wisconsin running back Melvin Gordon, he of the 408-yard field day against Nebraska and the 2,100-yard season which could have two more regular-season games and three more games in total. Gordon and Marcus Mariota are 1-2 in the Heisman Trophy race — the order is what’s unclear — and as a result, any major step forward or backward will be noticed and digested this close to the finish line at the Downtown Athletic Club in New York on Dec. 13. There’s no question that Gordon is the reason most national observers will peel away from the Egg Bowl on CBS in the 3:30 Eastern game window (or keep Gophers-Badgers on the tube in a two-TV setup, or ensure that Minnesota-Wisconsin is monitored on a live streaming service or device).

Yet, while Gordon is the national centerpiece of this contest, the ghost hovering over Wisconsin in the hours before kickoff is very keenly felt. It’s a ghost Joel Stave needs to dispel on Saturday.

The plot twist: Gordon could be the man to help his quarterback overcome a nightmare that’s one year old. 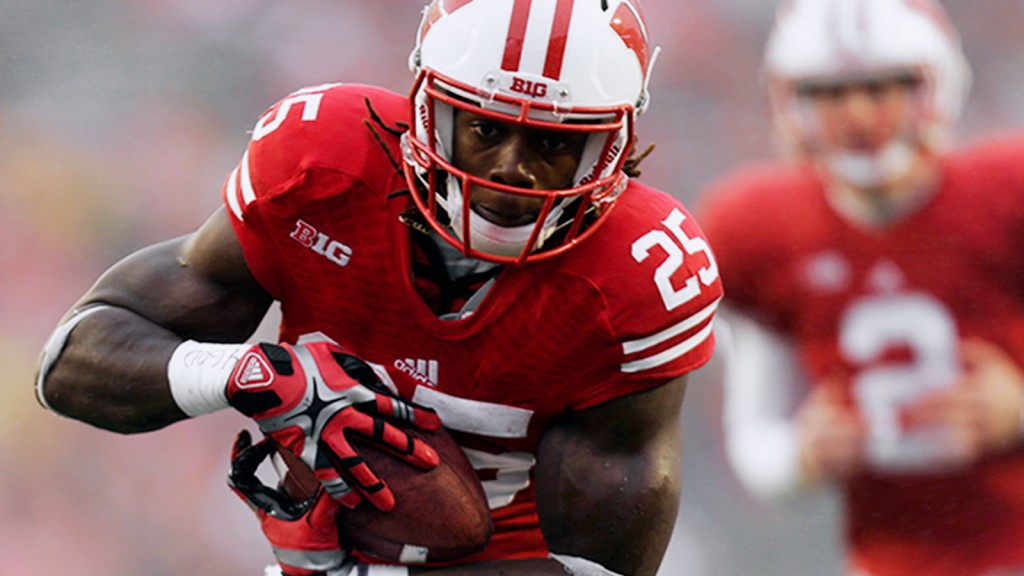 Melvin Gordon’s biggest contribution last week against Iowa came in the passing game. That component of his skill set — catching passes out of the backfield — could be the very thing that will lift Wisconsin to a division championship against Minnesota on Saturday… and possibly a lot more in the following month.

Wisconsin was ready to make a BCS bowl last season. The Badgers played their final home game of 2013 on the Saturday after Thanksgiving against Penn State. Wisconsin was expected to handle an average bunch of Nittany Lions, but what was also expected was that Stave would not throw three interceptions and collapse under the weight of high-stakes pressure. The implosion of Wisconsin’s passing game led to a crushing defeat in Madison. The Badgers were relegated to the Citrus Bowl (Capital One had been the official name, but you know how much that matters to lovers of college football), and their passing game really never recovered after that point in time…

… until, it could be argued, this past Saturday against Iowa.

With the Hawkeyes roaring back from a 16-point deficit to create a tense 19-17 score, the Badgers — up by only two points in the fourth quarter — had to come up with a special drive to keep their season on track. Gordon entered the picture… but not as a runner. The Heisman candidate became a pass-catching star, taking the ball in open space and making Iowa defenders miss on multiple occasions. This new use of Gordon in passing situations represented a difference-making moment last Saturday in Iowa City. Gordon enhanced his Heisman credentials. Instructively, he gave Stave a lifeline and stabilized Wisconsin’s offense.

If Gordon can draw attention as a receiver in this game and pull Minnesota’s linebackers to one side of the field, Wisconsin could potentially hit big plays in the passing game without Gordon even touching the ball. Naturally, the Badgers will need to give Gordon the rock many times on handoffs, trusting their meal ticket to carry them to Indianapolis, but there might come a few occasions on Saturday when Gordon’s threat as a receiver will matter for Gary Andersen’s athletes. Gordon’s presence in open space could enable Wisconsin’s passing game — which was such an unmitigated disaster in the first half of this season — to be competent against the Gophers. Basic competence — which was not in evidence a year ago on Thanksgiving Saturday in Camp Randall Stadium against Penn State — is all Wisconsin needs in its aerial attack to field an appreciably complete offense.

If the Badgers can write a different script compared to one year ago against Penn State, they would gain a chance to jolt the college football season — and the big, bad Buckeyes of Ohio State — one week later.