You can plainly see that the above cover photo for this story is not taken from Saturday in Madison, Wisconsin. The above photo of Melvin Gordon running away from a Nebraska defender comes from the 2012 Big Ten Championship Game in Indianapolis.

On that night nearly two years ago, a few things happened:

The Badgers ran for 539 yards. Using two featured running backs, Wisconsin gained 418 yards from that two-headed monster. Gordon formed one half of that real-estate-eating creature. Montee Ball formed the other. Gordon gained 216 yards (on only nine carries), Ball 202.

The Badgers threw for under 72 yards — 71, to be exact. They never really needed to throw. They were able to run without ceasing, piling up as many points as they wanted.

Nebraska, very simply, not only lost; the Huskers were humiliated in a game with either divisional or conference championship implications.

You can see where this is all going, right?

This past Saturday, Wisconsin’s smackdown of the Huskers in the snow took the 2012 Big Ten title game and offered an eerily similar repeat of what happened two years ago:

The Badgers ran for 581 yards. Instead of a two-man combo gaining 418 yards, Melvin Gordon “merely” gained 408 yards on his own.

The Badgers threw for under 72 yards — 46, to be exact. They never really needed to throw… again. They didn’t need to disguise what they wanted to do… again. They trampled over the Huskers, putting them six feet under the field turf of Camp Randall Stadium.

Nebraska once again got embarrassed with a division or conference title on the line.

All this is simple enough to take in, but what’s the deeper meaning of it all? This is where Huskers-Badgers, the repeat beatdown, begins to tell a number of illuminating truths about the college football industry. 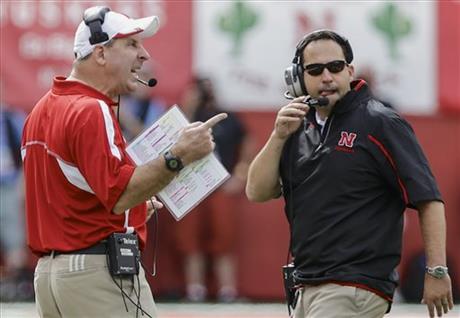 Forget Bo Pelini (left) for a moment — where’s the accountability at Nebraska in terms of calling defensive coordinator John Papuchis (right) on the carpet? If Pelini is allowed to stay on as Nebraska’s head coach next season (which is quite probable, if not a certainty), one would like to think that Papuchis will be forced to leave. If not, how can anyone in Lincoln feel that the problems affecting this program are being taken seriously?

The bad news for Nebraska and the great news for Wisconsin — beyond the change in the Big Ten West Division race — can be found in the fact that the Huskers’ coaches for this game were the same ones as in 2012, while the Badgers’ coaches were different.

Bo Pelini and defensive coordinator John Papuchis witnessed the 2012 debacle. This past Saturday, two years later, the Wisconsin rushing game was just as successful in making Nebraska’s defense look awful. From a pure numerical standpoint, Melvin Gordon was twice as successful against the Huskers as he was two years ago… and two years ago, he gained 216 yards on nine carries.

If Nebraska doesn’t at least ship out Papuchis — leaving its far more flawed coordinator post unchanged — what reason is there to think that the Huskers will finally cross the threshold under Pelini and win a first Big Ten title? Will Muschamp could soon hit the market for defensive coordinators, as could Greg Mattison at Michigan once the ax falls on Brady Hoke. There will be choices available for an upgrade of Charlie McBride’s former position, the post which created the Blackshirts in Lincoln.

Pelini, it’s worth reminding everyone, has been the head coach of this storied program since 2008. A first conference title has not yet arrived. Nebraska has to confront harsh realities sooner rather than later… and no program has forced the Huskers to look in the mirror more than Wisconsin has.

Speaking of Wisconsin, Bret Bielema was the head coach for the 2012 Big Ten Championship Game. When Bielema bolted and Wisconsin hired Gary Andersen from Utah State, the Badgers hoped — but couldn’t fully know — if they were getting the value and continuity they were looking for. With this win — achieved in a manner that’s so strikingly resemblant to the 2012 Big Ten title tilt — Wisconsin can say that its identity, or at least everything good about that identity, remains very much intact. If the Badgers can get a quality quarterback (famous last words in Madison, of course…), they can be every bit as good as they were under Bielema, if not better.

The extent to which Nebraska must be despairing right now is matched by the extent to which Wisconsin must feel affirmed. Two coaching situations, two program situations, moved in opposite directions on Saturday. You’re not going to find many games over the course of a college football season which create such a two-pronged storyline in the coaching profession. This was one of them. Huskers-Badgers changed a lot about the college football industry.

There’s one more obvious way in which Nebraska-Wisconsin 2014 affected the current season: Melvin Gordon is now front and center for the Heisman Trophy, assured of getting a plane ticket to New York as a finalist.

The true drama surrounding Gordon is this: Should a 408-yard performance against a team with Nebraska’s brand name automatically mark Gordon as the frontrunner, or does this result have to be taken contextually? It is very reasonable to say that “408 against Nebraska” is “408 against Nebraska,” or at the very least, “408 is 408, period.” That’s a fair argument.

However, since Gordon was waltzing through Nebraska’s and Papuchis’s defense two years ago, just how much is this a credit to Wisconsin, relative to the extent to which this reflects negatively on the Cornhuskers? One could make the argument that “408 against Nebraska” should buy Gordon a plane ticket and a finalist’s spot, but not a trophy. Marcus Mariota of Oregon will have something to say about the matter, for one thing. What might be a better and fuller contextual way of assessing this situation is that if Wisconsin does indeed win the Big Ten West, Gordon’s performance against Ohio State in a possible Big Ten Championship Game should determine whether he wins the award or not.

A divisional race was reshaped on Saturday. A one-loss team with College Football Playoff aspirations (Nebraska) received a knockout blow in that context. Two programs received completely different messages regarding their coaching situations. The Heisman Trophy race was dramatically reshaped, with fresh questions entering the discussion.

Other than those items, nothing remotely important happened in Camp Randall Stadium on Saturday.

The College Football Playoff put the focus on other games across the country in week 12, so for a game with no remaining playoff contenders (unless you give Wisconsin a fringe opportunity), Huskers-Badgers proved to be a very influential contest.

We’ll see what happens in the weeks and months ahead — the impact of this game might only increase in the course of time.