There’s a lot to say about this upcoming Saturday in college football. We’ve already said a lot about it at The Student Section.

For now, though, take a little time to pause before the storm of activity — and emotion, and season-changing results — that will flood your television set on Saturday. This is not a theatrical pause; it’s a pause designed to draw a line between this Saturday and what will follow it.

The greatness of Saturday’s schedule — with six games pairing top-25 teams — is evident on many levels. The more essential aspect of these six showdowns is that they will separate pretenders from contenders. They’re going to eliminate some teams from the College Football Playoff chase while propelling others toward the center of the conversation.

The happy coincidence found in this Saturday’s schedule is that it just happens to land on the second weekend of November, in week 11. In what is a 15-week season (not counting Army-Navy), the second week of November has always marked — to me — the point at which the argumentation that has always been a part of major college football begins to matter.

I’m the managing editor of this site, but anyone else who writes here is free to argue anything in just about any manner at any time, as long as the argumentation is sound and well-written. Tonal and directional qualities of arguments can run the gamut of possibility — as long as they’re thoughtful arguments, though, they have a place here.

For me, though, “argument season” in college football is utterly pointless until after the second weekend of November. Through the first two-plus months of the season, teams remain mysteries. Schools can and do play back-loaded schedules, which can and do mask outwardly attractive records come late October. Teams that endured injuries (Oregon) get healthier as the season moves along. Other teams (Navy) run into injury problems that detract from their overall quality. You also see obvious changes in teams and games over the course of the season. Late-August and early-September results throw some serious curveballs. 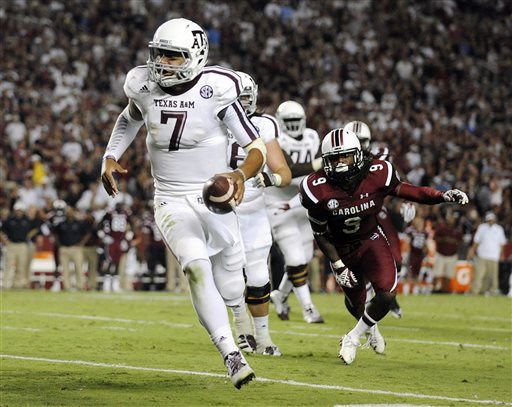 The Texas A&M-South Carolina game looks so dramatically different in the present tense, compared to what the game seemed to suggest at the time of the Aggies’ blowout. The same general dynamics apply to Virginia Tech-Ohio State, East Carolina-South Carolina, East Carolina-Virginia Tech, Indiana-Missouri, and other games one could readily place in that same basket.

The LSU team of the past few weeks is very different from the LSU team that muddled through the first six to seven weeks of the season. The Arizona State team that looked invisible on the defensive side of the ball against UCLA is now being carried by that same defense, all while Todd Graham’s offense struggles.

Life is defined by change. A sport played by 19- and 20-year-old male members of the human species is that much more susceptible to abrupt shifts in plot, tone and texture. With injuries and other variables in the pot, it is my own personal view — I won’t chain any other pundit to it — that resume or Heisman arguments conducted before the second Saturday of November just aren’t worth the time.

After six highly revealing games on Saturday, there will be only four more Saturdays in the season, only three of them in advance of the conference championship games. That feels like the home stretch. Saturday feels like the final turn on the racetrack, setting up the stretch run that begins in week 12, on Nov. 15.

I’ve largely stayed away from College Football Playoff and Heisman arguments in my editorials and other pieces here at TSS.

Be warned: That changes on Sunday morning.

The first order of business will be to frame arguments responsibly. We’ll tackle that topic soon enough.

For now, though, enjoy this upcoming Saturday.

Then we’ll talk (and probably begin to disagree).

‘Tis just about the season.