With conference season (finally) underway, the college basketball landscape is starting to take shape a bit and teams can more comfortably be sorted into tiers. While this means we have seen some surprising teams (I’ll admit I didn’t see Oklahoma State coming), it also means we have some disappointing teams. Sadly, the latter are what we are discussing today.

We’ll lead off with the Wildcats. Picked to finish fourth in the Big 12, Kansas State does have a big win at Oklahoma, but has coupled that with losses to Long Beach State, Tennessee, Georgia, and Texas Southern. The Wildcats don’t really have a point guard, which is obviously a problem, and Marcus Foster hasn’t been the team’s best player. Foster is a 45-percent shooter from three, but that is about all he has done this year. He is not getting to the line, he does not rebound, and he turns it over too much. If the Wildcats are going to get to where they need to go, Foster will have to improve his all-around game. One bright spot for Kansas State, however, has been the play of Thomas Gipson. He is shooting 61 percent, and is second in the entire country at getting to the free throw line. The Wildcats have a long way to go just to make the NCAA tournament, but in the Big 12 they will have a lot of opportunities to pick up big wins.

Although the Aztecs sit at 12-4 and really have only one bad loss, their abysmal offense basically dooms them to virtually no postseason success. Only two San Diego State players have an offensive rating above 100, and the team’s adjusted efficiency rank on KenPom is a ghastly 239th.

San Diego State ranks 200th or worse in effective field goal percentage, turnover rate, three pointers, two pointers, free throws, percentage of shots blocked, and percentage of possessions ending with a steal. Basically the only good way an Aztec possession ends is if someone tosses up a brick and San Diego State grabs an offensive rebound and puts it back. Needless to say, that is not a great way to make a living on that end of the floor.

With San Diego State’s defense (currently second in KenPom), it should be in every game, but with the importance of offense in the postseason, I would be surprised to see the Aztecs even in the Sweet 16.

Maybe the biggest disappointment of the season, Michigan famously lost back to back games to NJIT and Eastern Michigan as part of a four-game losing streak for the Wolverines. Michigan has righted the ship a bit, starting Big Ten play 3-2, but its offense has been abysmal so far. Michigan ranks 111th in KenPom, a disastrous surprise for a John Beilein team, and is 11th in conference play at shooting inside the arc. I still feel those numbers will improve, if only because they almost have to, but there’s no doubt that those who predicted a Michigan drop-off this year have been proven correct. 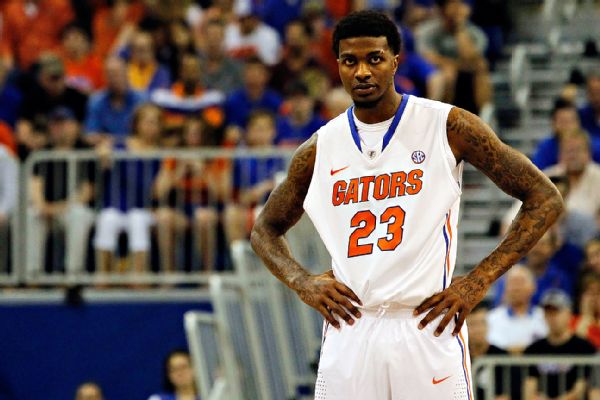 Chris Walker and the Gators have struggled, but are a good bet to turn things around.

The Gators are 23rd in KenPom, so all is not lost, but 9-6 can’t be how Billy Donovan expected the season to start. The Gators have been hit hard by injuries, but also have two separate instances of back-to-back losses. Their struggle has mostly been on the offensive end, but if you’re looking for a team to peg as a bounce-back candidate in the second half of the season, look no further than Gainesville. The Gators have played a tough schedule thus far, and their only bad loss is to Florida State on a fluke tip-in. Florida also has close losses to Georgetown, Kansas, Connecticut, and Miami. A team’s record in close games tends to even out, so expect the Gators to be a challenger in the SEC going forward.

The Longhorns were projected as a potential favorite in the Big 12, but have started conference play just 1-2. Isaiah Taylor came back from his wrist injury, but has really struggled this season, posting just a 42.3-percent effective field goal rate and a 26.1-percent assist rate compared with a 21-percent turnover rate. Freshman Myles Turner’s numbers look excellent superficially, but has really struggled on offense in conference play, shooting just 6-21 on twos in Big 12 games. Texas will still be in every game it plays from now until the end of the season because of its tough defense, but the offense will have to improve in order for the Longhorns to win the Big 12.