The city of Cincinnati is uncomfortable enough in the realm of professional sports. The Reds are in rebuilding mode, and the Bengals… well, they’re the Bengals.

This discomfort extends to the collegiate ranks.

Let’s be clear at the outset: An uncomfortable situation is not equivalent to a rock-bottom situation. Discomfort is not purely a reflection of a lack of quality. As the Bengals show, an uncomfortable reality can and does coexist with postseason appearances and the genuine potential of a contender. The essence of the discomfort provided by the Bengals is this gnawing sense that nothing’s ever going to change, that a (low) ceiling isn’t going to be pushed higher.

This is where a segue to college sports at the University of Cincinnati fits rather neatly.

Consider various football and basketball programs across the country. A number of football programs are immersed in uneasy relationships with their current head coaches: West Virginia and Dana Holgorsen, Texas Tech and Kliff Kingsbury, Tennessee and Butch Jones, Nebraska and Mike Riley, and Gus Malzahn with Auburn are just a few examples. Yet, if you then look at the basketball coaches at each of those programs, you’ll find a person who has either achieved richly; improved markedly; or who in some way inspires an optimism currently missing from the football side.

You can then consider a number of basketball programs — we identified five of them here — with less-than-ideal coaching situations. If you flip to the football half of the equation, those schools are either in very good situations, or have been so miserable (in the case of two specific programs on that list of five) that “discomfort” really isn’t the pervasive feeling on campus. 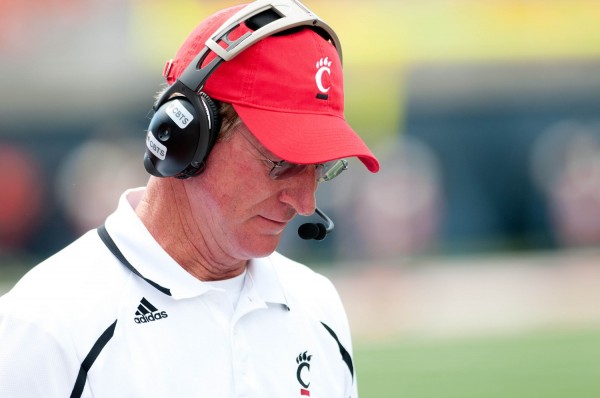 If you were to identify an FBS (football)-Division I (basketball) school with two uncomfortable situations on its hands, you could provide valid answers in a few places.

California basketball has become something of a mess (off the court) in light of the Yann Hufnagel controversy and Cuonzo Martin’s currently unclear relationship to it. In light of Sonny Dykes’s consideration of other coaching jobs before he stayed put in Berkeley, the Golden Bears cannot rest easy in football or hoops. They fielded good teams this past college sports cycle, but their coaching situations are not oases of stability.

Another good example of a pigskin-and-roundball combination which rests on shaky ground is Minnesota. There’s a nuance involved, however: Tracy Claeys is an interim-turned-permanent football coach. It’s not as though he’s had a full chance to prove (or disprove) that he can perform at a high level on the gridiron. Richard Pitino is on his way out the door if he can’t author a basketball revival, but Claeys deserves a season before the Gophers’ level of discomfort rises to a higher level.

The best example of an uncomfortable duo in football and men’s basketball belongs to the Cincinnati Bearcats.

That episode, combined with family and financial problems over time, has marked part of a tumultuous period in Tuberville’s personal life. Naturally, people with cluttered and problematic personal lives often find it difficult to be at their best on the job. Tuberville’s career trajectory — since his perfect 2004 season at Auburn — has gone straight downward. Tubs might not have nosedived, but he has steadily lost steam and has lacked a pronounced achievement over the past 10 years, something which stands above and beyond his peers.

There’s an unmistakably stale quality to Cincinnati football, while the brighter coaches of The American — Matt Rhule at Temple, Ken Niumatalolo of Navy, and Tom Herman of Houston — have acquired a bigger national spotlight.

In basketball, it’s not that different.

Mick Cronin is a good coach. He’s led Cincinnati to the Sweet 16 and regularly gets the program to the NCAA tournament. Yet, for the program of Ed Jucker and Oscar Robertson and — three decades later — Bob Huggins and Nick Van Exel, the Bearcats seem stuck… not in misery, but in the uncomfortable environment of achieving at a modest level with no immediate prospect of climbing higher. What’s more is that Cronin himself felt this lack of contentment. Why else did he come close to accepting the job opening at UNLV?

When a program such as Colorado basketball quietly settles into an 8-9 or 7-10 game, the program is doing very well by historical standards and measurements. That’s not the case at Cincinnati. The program should not be expected to be a Final Four contender on an annual basis, but it should be a regular threat to make the Sweet 16. Southwestern Ohio and Northern Kentucky are pretty good places to recruit, and Cincinnati has certainly been passed by archrival Xavier in the Queen City.

All this paints a picture with some eerie tie-ins to the NFL Bengals. The basketball Bearcats are making the postseason more often than not, but they don’t get very far, and in light of what predecessors did (Sam Wyche and Forrest Gregg in football, Jucker and Huggins in basketball), it’s very easy to arrive at the conclusion that the team isn’t reaching its potential.

Is that a fair verdict? Maybe not… but the emotional and cultural realities exist.

Let’s see where we are 12 months from now when evaluating Cincinnati… and Berkeley, and Minnesota, plus other schools where football and men’s basketball teams aren’t necessarily bad… but live in worlds that feel anything but safe and secure.