Cole Field House, on the campus of the University of Maryland in College Park, deserves a moment — more precisely, a moment beyond its most famous moment.

Wednesday night, some Americans watched ESPN’s rebroadcast of the 1966 NCAA national championship game in which Texas Western’s all-black starting five beat Kentucky’s all-white team, forever changing college sports and its recruiting practices. That Final Four was held in Cole, the venerable and treasured basketball arena which used to be Maryland’s home. (The Terrapins have since moved into a new arena with the revenue streams and modern amenities one expects from a high-end Division I facility.)

Cole Field House — within the larger context of college basketball history — will always be known, first and foremost, for Texas Western. Moreover, it should be.

Just allow the other Final Four held in the grand arena to be remembered and not disappear into the mists of history.

Cole Field House owns a remarkable distinction, shared only by Hec Edmundson Pavilion (now Alaska Airlines Arena) at the University of Washington: It is one of only two on-campus arenas to have hosted more than one Final Four.

Keep in mind, for the sake of clarity, that other buildings are (or have been) regularly used by schools, Freedom Hall in Louisville (the host of six Final Fours) being the most prominent example. They were not, however, on-campus facilities operated by the local school. Cole and Hec Ed are the only two such on-campus sites which hosted the Final Four more than once. With Cole no longer Maryland’s regular home, Hec Ed is the only active facility to own the distinction, but Cole shares it for the rest of history. Obviously, neither building will ever host another Final Four.

It is that second Final Four for Cole Field House which is the subject of this piece. 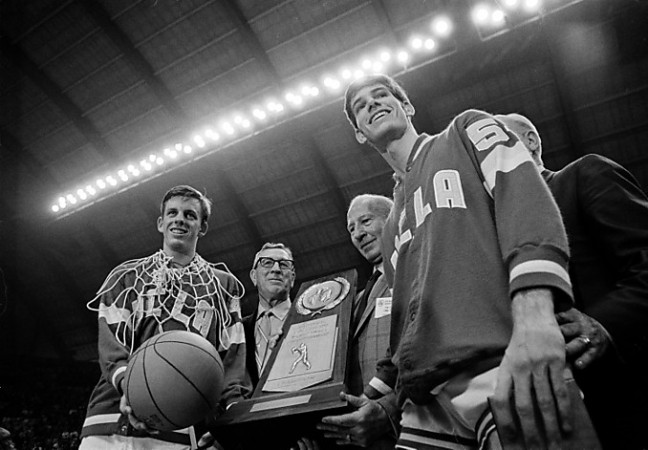 UCLA coach John Wooden, second from left, holds the 32nd NCAA Men’s Basketbal championship trophy he received as the Bruins won their sixth NCAA basketball title after defeating Jacksonville, 80-69, at College Park, Md., March 21, 1970. UCLA’s only senior player, John Valleley, wears the net he cut down at left. At right is John Ecker (52). The official in the middle is unidentified. (AP Photo)

The 1970 Final Four was endlessly interesting. Its games were not classics, but they weren’t colossal duds. One of the national semifinals was closely contested, and the title game was hardly a runaway — the loser made the winner work for everything it attained.

Yet, the 1970 Final Four will not be remembered for the quality of its three games (excluding the third-place game, which might have meant something on one and only one occasion, in 1965, when Bill Bradley scored 58 points against Wichita State). This Final Four is somewhat significant in that it extended UCLA’s streak of national titles in the years between Lew Alcindor and Bill Walton. John Wooden was able to win seven straight national titles because he built a team good enough to win without an overpowering big man in 1970 and again in 1971 in Houston’s Astrodome.

Yet, the biggest reason Cole Field House’s “other” Final Four remains significant, even now, is the composition of that quartet. This Final Four matters in college basketball history because of the four schools which gathered in College Park, and because of the journeys they made before and after 1970.

The first five Final Fours — 1939 through 1943 — all featured first-timers. Starting in 1944, the composition of the Final Four included at least one return visitor per year. Having four first-timers on college basketball’s ultimate weekend ceased to exist.

What’s remarkable about the 1970 Final Four, though, is that whereas some of the schools in the first five Final Fours returned to the event in subsequent seasons, thereby removing the first-time label in due time, the 1970 event features three schools which had never previously made the Final Four… and haven’t returned in the next 46 years.

UCLA naturally anchored the 1970 Final Four and gave the event a measure of stature, but the other three party-crashers — making their debuts on the big stage — have never found their way back.

In the cover photo for this story, the man in white shaking John Wooden’s hand is Joe Williams. He was the head coach of the Jacksonville Dolphins, who lost to UCLA in the championship game. A memorable portrayal of Williams from Paul Hemphill of Sports Illustrated can be found here. Williams gave that Final Four a large dose of personality and color, putting a fresh face on an event UCLA dominated. Yet, the mere reality of Jacksonville’s presence is what lingers nearly half a century later. 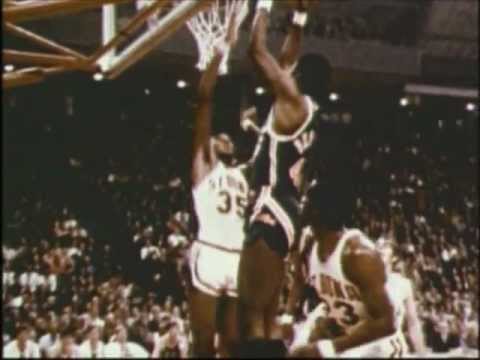 Jacksonville defeated Saint Bonaventure in the national semifinals (shown above). The Bonnies were led by Bob Lanier — a 29-points-per-game superforce and future NBA star — but Lanier was injured in his team’s Elite Eight victory over Villanova and could not play in the Final Four.

One of the great what-ifs of college basketball history surrounds the ability of the Bonnies to challenge UCLA for the 1970 title if Lanier had been healthy. Nevertheless, Bonaventure put up a good fight against Jacksonville before falling short in the semis. Even though the Lanier injury stung — and still elicits a chorus of “what might have been” — at least the Bonnies have a Final Four to their credit. It’s hard to see how they’ll climb the mountain and regain such prominence in the sport.

A video on the 1970 Saint Bonaventure team can be found here:

The third non-UCLA school which spent that week in Cole Field House — another one likely to never again make the Final Four barring a remarkable series of events — was New Mexico State. The coach of the team was Lou Henson, whom many know well as the man who coached Illinois in the 1980s against Bobby Knight and Gene Keady and Bill Frieder and others. Henson returned to the Final Four with the Illini in 1989, a 19-year gap between Final Fours. Lon Kruger’s 22-year gap — 1994 to 2016 — eclipsed Henson’s interval by a small margin.

The star player on that New Mexico State team was Jimmy Collins, whom some might identify as the man who coached the Illinois-Chicago Flames to three NCAA tournaments near the turn of the century. Collins — along with Lanier and Jacksonville superstar Artis Gilmore (who is a member of the Basketball Hall of Fame) — averaged over 24 points a game. Each of the three newbies at the 1970 Final Four were carried by a transcendent talent. UCLA used balanced scoring — five players averaged no worse than 12.5 points per game for the season — to outflank and outperform New Mexico State in the semifinals and Jacksonville (especially Gilmore) in the final. 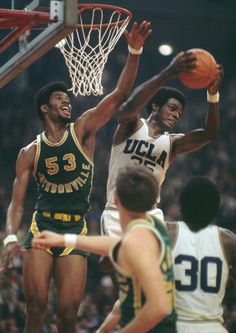 There have been other highly improbable Final Fours over time. The one which comes closest to 1970 on a scale of improbability is 1979. Penn somehow got to the Big Show as a 9 seed under a coach, Bob Weinhauer, whose relatively brief career flamed out in the 1980s with Arizona State. Indiana State was not a surprising Final Four participant within the context of the season — that Larry Bird fella could play, to put it mildly. However, the Sycamores, like Penn, are a team which has never made the Final Four before or since that moment. The 1979 Final Four had two-thirds of 1970’s unlikely cast of characters.

The Final Four, in 1970, wasn’t a brand-new event, but it was nothing like the spectacle we have today. The Final Four was the endpoint of a relatively short NCAA tournament at the start of the 1970s. It would take another decade for the tournament field to be seeded and acquire a size of 48 teams, which became the magic 64 in 1985. The structure and setup of the NCAA tournament in 1970 made it more possible for a champion of a smaller conference — or a standout independent team — to hit the big time. Jacksonville, Saint Bonaventure, and New Mexico State all took advantage in ways that are just about impossible to fathom now.

The 1970 Final Four — UCLA and three programs which had their one and only moment in time — is a chapter of college basketball history that’s unlikely to emerge ever again.

Cole Field House’s “other” Final Four was just as distinctive as the 1966 edition… just without the lasting social and cultural significance.