The new college basketball head coaching class is still being filled — five of the 48 changed jobs this offseason remain vacant — but one can already say that the largest group of first-year coaches in Division I men’s basketball consists of those who will take over programs for the very first time in their careers.

What makes this scenario exponentially more interesting is that the community of new leaders in college basketball is hardly cut from the same cloth.

See that man above in the cover photo for this story? You probably recognize him as the NBA player he in fact was, but Damon Stoudamire has been a college assistant coach for years, and now he gets the keys to the kingdom at the University of the Pacific. This coming autumn, Stoudamire and another former Portland Trail Blazer, Terry Porter, will both enter their first full seasons as permanent Division I head coaches.

Stoudamire and Porter bring an NBA flavor to the new community of Division I head coaches. So does this man: 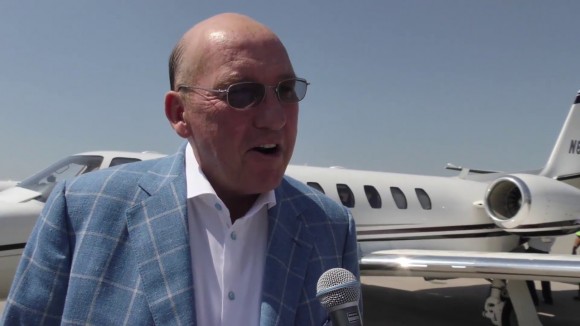 The 62-year-old version of this man is now almost completely bald (certainly from a frontal view). You might not recognize him on sight. In fact, the picture above looks more like a 70-year-old Jack Ramsay than anyone else.

However, it’s Mike Dunleavy, Sr., a man who played and coached in the NBA Finals. He played in the 1981 series with the Houston Rockets against the Boston Celtics. A decade later, he coached in the event with the Los Angeles Lakers against the Chicago Bulls. This is the 37-year-old Dunleavy who roamed the bench in the season which produced Magic Johnson’s last NBA Finals and Vlade Divac’s first: 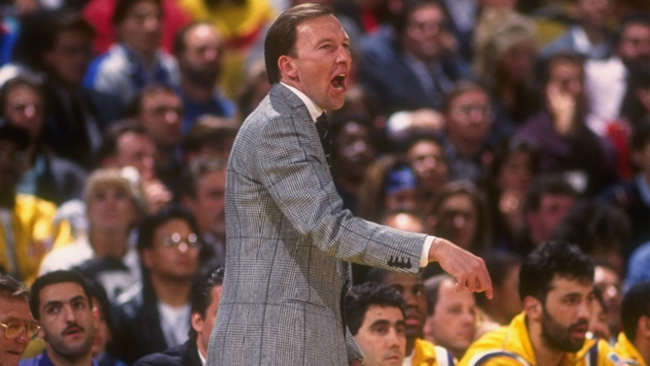 Dunleavy is one of 24 men who will be permanent D-I head coaches for the first time.

Yes, it’s true: Dunleavy, Sr. — despite a multi-decade NBA coaching career — has never set foot on a college sideline the way some nomads such as Rick Pitino and Larry Brown have managed to do. Dunleavy is a rarity — a first-time college head coach at age 62 — but he’s a first-timer nonetheless. Those first-timers (24 of them) currently comprise exactly half of the 48 new hires in college basketball in the latest spin of the carousel. When the final five hires are made in the coming weeks, expect the total to rise.

What’s fascinating about this group of 24 (and counting) is that it’s hardly confined to the realm of NBA figures. So many different profiles and situations encompass this class of first-time D-I coaches. 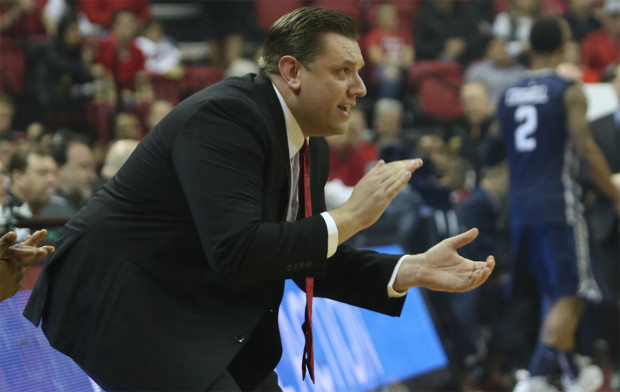 The man above is Todd Simon, who just took the job at Southern Utah in the Big Sky Conference. Simon will lead the Thunderbirds after serving as the interim head coach for UNLV following the in-season dismissal of Dave Rice in late 2015. Simon hasn’t ever been a permanent D-I head coach, but now he gets his chance. Like Anthony Stewart at Tennessee-Martin, Simon has been a D-I head coach in an interim capacity, but knowing you’re “the guy” represents an entirely different level of pressure and responsibility.

Another coach who has been a collegiate head coach before — but not at the D-I level — is Ryan Odom. He’s the new boss at the University of Maryland, Baltimore County (UMBC), situated in the America East Conference. Odom coached at Division II Lenoir-Rhyne for a season, so he’s a man with previous experience as a permanent college head coach… but not in Division I.

Almost all of the other first-time Division I head coaches are assistants who finally have their hands on a job they can call their own. Some — such as Jimmy Allen at Army, were promoted from within after the head coach left for another job. Others, such as Lew Hill at UT Rio Grande Valley, have taken a small-conference job after being an assistant at a high-major program. Hill has been a Lon Kruger assistant for over a decade, most recently at Oklahoma, and after all that time as a trusted aide, Hill is now the face of his program.

Even within the ranks of assistants-turned-head coaches, one can find some variety. Hill has been an assistant coach for multiple decades — more than a quarter of a century, in fact. He’s not a young high-climber, but he did finally want to try his hand at being a head coach.

An example of the young high-climber — a relatively common profile within the larger architecture of Division I college basketball — can be found at UAB, where Rob Ehsan replaced Jerod Haase (who went to Stanford). Ehsan turns 34 in May, and was the man Haase wanted to succeed him in Birmingham. Gary Williams, head coach of the 2002 national champion Maryland Terrapins, speaks highly of Ehsan. He’s the young coach with a bright future, and there’s plenty of room for him — with Lew Hill — in the larger group of assistants now entering the crucible of D-I head coaching.

The carousel will eventually spin 48 times. It has spun out 24 coaches who will be permanent D-I bench bosses for the first time this autumn, and a few more examples are likely to come.

This is but one example of how the face of college basketball changes so rapidly from one year to the next. If you see schools rise from a period of slumber, don’t be shocked if new blood and new ideas engineer a transformation.