Kermit Davis and Middle Tennessee certainly attained college basketball immortality on Friday afternoon in St. Louis. Yet, we all know that for the likes of the Blue Raiders and their coach, their immortality belongs to one season, one special point in time, one frozen moment unlikely to be reduplicated.

Yes, other 15 seeds will beat 2 seeds — that will be repeated in the future — but how many more times will a specific school and a specific coach pull it off? None of the schools which won as 15 seeds (there are now eight) have ever done it twice. Richmond won as a 15 in 1991 over Syracuse, and then as a 14 in 1998 over South Carolina — that’s as close as anyone has come. (The Spiders also won as a 13 over a 4 in 1988, when they knocked off defending champion Indiana and Bobby Knight.)

For the Middle Tennessees of college basketball, immortality belongs to a day, a week, to one tournament when everything fell into place.

For Michigan State and Tom Izzo, it’s different, albeit complicated.

For the Spartans, the sadness is real and overpowering, as Michael Grant of Comeback Sports showed in his excellent piece on the upset for the ages. This is not the kind of loss to which one says, “Ah, the Spartans will get over it. Besides, they’ve won a ton. Who are they to complain?” Yes, Michigan State has won a lot, but whenever a team is capable of greatness, and it meets with an end this shocking and premature, it’s a blow to the system, regardless of what the program or its players have done in the past.

Izzo acknowledged as much when a reporter asked him about “motivation for next year.” Izzo didn’t care one whit about next year. He wanted to mourn the loss of his players’ aspirations in the present moment. He wanted to grieve for the heartbreak his young men felt on a day when they just didn’t have answers for the offensive game plan hatched by Davis, brilliantly executed by every MTSU player.

The pain Michigan State feels should not be shrugged off in the present tense. If you’ve ever had dreams cut short — chances are, most of us have — you should empathize with what the Spartans are going through right now. 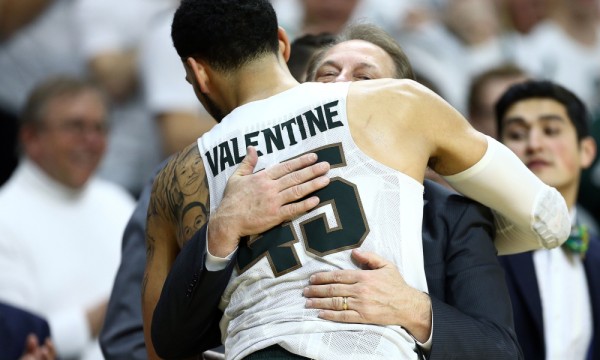 Yet, in the fullness of time, when life does carry us into next season (it just shouldn’t be discussed right now), Izzo will be there with a chance to win big. Izzo will be on the stage in March for many times to come. He’ll still be a part of our lives, and of the life of college basketball.

Middle Tennessee won’t — not nearly to the same extent, or with the same repeated chances to reach the Final Four.

That’s what must be kept firmly in mind about this sport, which many Americans don’t care about until this very month, this precise point on the calendar.

College basketball is a house with many rooms — 351 of them, to be exact, nearly three times as many as FBS college football. For all the Middle Tennessees of the world, there are dozens of NCAA tournament teams in the 13-to-16-seed range which don’t win in the round of 64. Beyond that, there are literally HUNDREDS of mid-major (or small-major, if you prefer) schools which don’t make the tournmaent and instantly fade into obscurity as soon as they lose in their conference tournaments.

Yet, at these hundreds of schools not part of the round of 32 which begins on Saturday, there are young athletes chasing a dream. There are coaches who toil in obscurity, in love with the game of basketball.

They’re just as human as Tom Izzo and Denzel Valentine: just as aspirational… but situated in a set of circumstances very different from the 1 and 2 seeds in March and their own kinds of coaches. Sometimes those coaches are iconic, as in the case of Izzo, and sometimes they’re not-so-iconic, as in the case of Larry Eustachy of Iowa State in 2001 against Hampton. (Side note: The quality not only of the losing team, but also of the losing coach, is what makes this the greatest NCAA tournament upset in the round of 64, and also the greatest upset in the tournament since the shot-clock era began in the 1985-’86 season.) 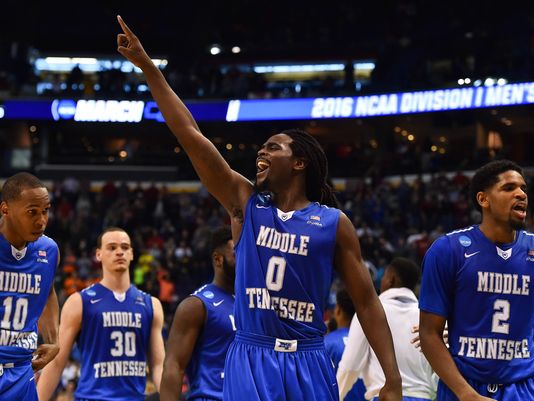 The larger point of all this: If college basketball really is a house with many rooms — a place where success can and does mean different things for different people and programs, something I absolutely LOVE about the sport and its larger structure — let’s VISIT these other rooms a little more often.

(That includes YOU, ESPN College GameDay. Visit the MTSU campus next year.)

Come to know the world of the coaches who labor in the salt mines.

Learn more about the coaches who pursue the professional satisfaction of being able to succeed at more than one coaching job in their careers.

Realize what it must feel like to coach for many years without an NCAA tournament win… until finally that blessed moment arrives. For Davis of Middle Tennessee and James Jones of Yale, profiled in the link provided in the previous sentence, long careers have finally birthed an NCAA tournament victory. Davis began his head coaching career in the late 1980s with Idaho. Nearly 30 years later, he finally has his first win in the Big Dance. Jones began his career at Yale in 1999. He won his first NCAA game on Thursday against Baylor.

Learn to appreciate what it’s like on the other side of the tracks in college basketball, where moments such as Middle Tennessee’s conquest of Sparta are singular in time and space.

The big boys will continue to populate March. They hurt and cry and feel pain just like the rest of us, and so they shouldn’t be ignored in their suffering. Just realize that while Middle Tennessee has its 15 seconds of fame, the coaches and players at MTSU and programs similar in stature have spent every waking moment to make dreams like this come true. For Davis, the journey to this point — strictly as a head coach — took more than a quarter century. There are many stories in the college basketball coaching business which have acquired a similar trajectory.

The story of Kermit Davis and Middle Tennessee might merely belong to a special day, one afternoon when everything worked just right. That’s how the common person might see this. Next November, how many of us will have the Blue Raiders at the forefront of our mind and memory?

That’s precisely part of the point.

The meaning of Middle Tennessee’s win is this: The magical March moment invites us to understand more about “How The Other Half Lives” in Division I college basketball.

Michigan State’s players and coaches aren’t less human, less immune to tears and heartbreak, than the rest of us. What this moment offers is the chance to appreciate the enormity of the little guy’s struggle, just to earn this one bread crumb of publicity and praise on a national scale.

Hopefully, Middle Tennessee will lead American sports fans — with so many entertainment options to consider throughout the year — into the rooms which rarely get explored in college basketball from November through February. If that happens, MTSU’s mastery of Michigan State will contain meaning far beyond One Shining Moment.