We’re not going to spend time debating whether Geno Auriemma is just as good a basketball coach as John Wooden was.

No — we’re not going down any of those routes. This isn’t a men-versus-women competition. We’re here to honor both programs and coaches, and what they achieved.

What’s fascinating — and briefly worth noting — after UConn’s fourth straight national championship on Tuesday night against Syracuse is how these programs have thrived at similar points in the histories of each NCAA tournament. This isn’t a long and complicated point to make, but it’s worth making, because I haven’t seen it made anywhere else.

(Side note: Just because I haven’t seen it made anywhere else doesn’t mean it hasn’t in fact been made anywhere else. That point is noted, too. However, why not spread this point instead of hiding it under a bushel?) 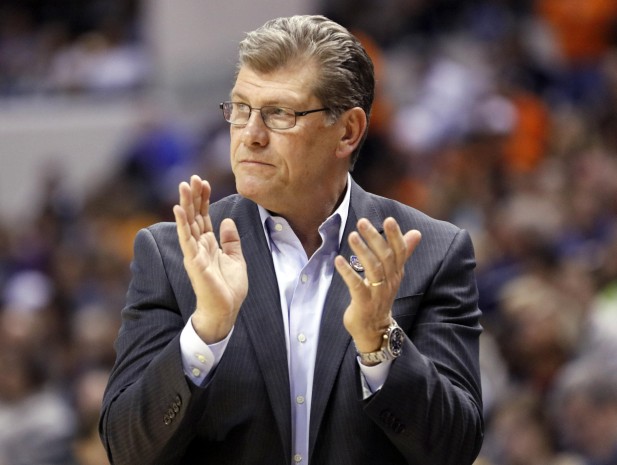 The UConn women’s program arrived in 1995 with the school’s first national championship, and the program then reached another level of prominence with three straight titles in the Diana Taurasi years, from 2002 through 2004. However, if there is a Pax Auriemma — as John Walters of Newsweek artfully refers to in this piece on the Huskies — it began in 2008, when Connecticut began its current run of nine straight Final Fours. The Huskies’ previous run was five straight, from 2000-2004. UConn has won six titles — a majority of its 11-trophy haul — in that nine-season period. Like the program it is being compared to, the Huskies won four straight championships, becoming the first school in their sport to do so.

Back in 1970, that’s what UCLA did for the first time in men’s basketball.

The cover photo for this story shows the Bruins and John Wooden posing for pictures after beating the Jacksonville Dolphins in the 1970 national championship game in Cole Field House on the campus of the University of Maryland.

We looked at that Final Four here, and two remarkable historical coincidences jump off the printed page:

1) In both Final Fours, one giant of the sport was accompanied by three schools making their first Final Four appearances. For the men, Saint Bonaventure, New Mexico State, and the aforementioned Jacksonville team were all first-timers. In this 2016 Women’s Final Four, Syracuse plus Washington and Oregon State were all new to the Big Show as well.

2) Of greater historical significance is that in the 1970 Final Four and the 2016 Women’s Final Four, men’s and women’s college basketball respectively crowned their first four-peat champions, marking the first senior classes in the history of both sport to never go a year without a national title.

Yes, freshmen were ineligible in the men’s game, but still, the athletes in that era never set foot on the UCLA campus in a season when the Bruins didn’t win it all. The same can now be said for the UConn Class of 2016.

Beyond these two links lies a bigger historical connection between UCLA in the Wooden years and UConn in the Age of Geno.

Referencing the start of Pax Auriemma in 2008 (above), UConn’s most prosperous period began in the 27th year of the Women’s NCAA Tournament, an event which began in 1982. The women’s Dance wasn’t a new thing, but this sport hasn’t been around (at the Division I collegiate level) for half a century or longer. Cultural resonance and media attention for the women’s tournament are still evolving, in the sense that the event doesn’t yet have the big-name cachet of annual cultural fixtures such as the World Series or the Super Bowl.

Guess what? When UCLA started its run of 10 championships in 12 seasons under the Wizard of Westwood, the men’s version of the NCAA tournament was in its 26th year.

Relative to the first NCAA tournament in 1939, and relative to the evolution of men’s college basketball, UCLA arrived on top and stayed on top at roughly the same historical moment the UConn women have seized.

The point is plain: UCLA under Wooden and UConn under Geno began their most prosperous runs after each of their respective NCAA tournaments had unfolded for roughly 25 years.

Is there a point here? Not a huge one; pointing out these details is really the central aim of this piece. If anything can be added to this historical context, it is simply that women’s basketball — as a larger entity — is thinking long and hard about tweaks and improvements. This reality was evinced by the move to quarters and no 1-and-1 free throw penalties, and more ideas are being tossed around as we speak. Regardless of whether these new ideas are implemented or retained, women’s basketball has room and space in which to evolve, much as men’s basketball did at the end of the Wooden era in 1975.

Let’s say more about 1975: That was the year the NCAA tournament expanded from 25 teams to 32 and allowed non-champions of conferences to get into the field. A few years earlier, freshmen became eligible to play. A few years after Wooden left, the NCAA tournament began to be seeded, and regionals (Sweet 16 / Elite Eight) became national in composition, instead of remaining geographically confined to regional representation.

Men’s basketball changed a lot in those years, and a decade later, the sport adopted both the shot clock and the three-point line. Women’s basketball won’t worry about those two components, but the game might change in many other ways which will change the arc of history.

Maybe someone will step up to stop UConn, maybe not — that’s neither here nor there.

For now, just consider how similar the 2016 Women’s Final Four and the 1970 men’s Final Four have become. Also appreciate how the UConn women and the UCLA men of John Wooden’s time have seized similar historical moments in college basketball.