For many of us, the scales even out in life if we live long enough.

The Kansas City Royals eventually made the World Series again.

The San Francisco Giants, with no World Series titles since coming to the Bay Area in the late 1950s, then won three in the past five seasons.

Those are examples of largely snake-bitten franchises finally finding their moments in the sun. Yet, even for teams that have been largely blessed in the longer run of history, the odd bounces and abrupt plot twists of sports cut in different directions.

Sometimes, the San Antonio Spurs get everything to break just right. Other times, the Spurs watch Manu Ginobili foul Dirk Nowitzki in Game 7 of the 2006 Western Conference semifinals. Sometimes, the St. Louis Cardinals get every break imaginable in the National League playoffs. Other times — in even years, specifically — they play the Giants and watch their luck run out. The scales tip in both directions, and it’s no different for one of the members of college football’s ruling class, a school that fell one win short of being in Monday night’s championship game.

The Florida State Seminoles went through a rough patch at the very end of Bobby Bowden’s tenure, but since the beginning of the 1980s, the number of truly unsatisfying seasons in Tallahassee can be limited to a single-digit number. With Jimbo Fisher reviving the program and bringing it back to the Bowden standard established in the late 1980s, every FSU season is sure to attain a mimimum level of success (barring three million injuries). Not every season will be a national championship season, but the floor for the program is now at nine to 10 wins. Definitions of a “successful” season are different (and will continue to be) in Tallahassee compared to Purdue or Oregon State or Kentucky, but on a more general level, “success” is the restored normal for the Seminoles.

It is within this context of success that Florida State — despite all its riches as a program — has been wronged.

Surely, that’s the most laughable statement of 2015, many of you are thinking. How can any two-bit hack dare say such a thing, after all the fortunate close-shave wins and the off-field dramas that never caused this team to fall off the precipice during the regular season?

Here’s the explanation. It’s not as complicated or unfathomable as you might first think.

On one level, the scales DID even out for FSU in the Rose Bowl against Oregon. After 13 games of getting good bounces, the Seminoles got bad ones. That’s an obvious “evening-out” scenario.

However, in another sense, Florida State was unfairly treated… not by Oregon, but by the College Football Playoff system.

Yes, of course it’s true that an unbeaten team with Marshall’s schedule should not be taken seriously (more seriously, at any rate, than a one-loss Ohio State or Alabama). Unbeaten power-conference teams, however, should be elevated above one-loss power-conference teams as long as strength of schedule is reasonably in the ballpark.  This should not be controversial, but it is for many in the sport.

Was the ACC that bad this season, such that unbeaten Florida State should have been seeded third, behind Alabama and Oregon? Hardly.

FSU beat Georgia Tech, a team that proved its worth in the Orange Bowl… and beat Clemson and Georgia late in the regular season, too.

FSU beat Clemson without Jameis Winston. The Tigers were not the bees’ knees in 2014, but they weren’t rubbish, either.

Louisville? Not a great team, but also solid.

Notre Dame and Florida in non-conference games? The Irish and Gators were bad enough that if FSU had lost once, yeah, the Seminoles would have had a hard time justifying playoff inclusion… but FSU never did lose. Notre Dame and Florida both finished with winning seasons and some modest achievements (the Irish beating Stanford, the Gators beat Georgia on a neutral field). 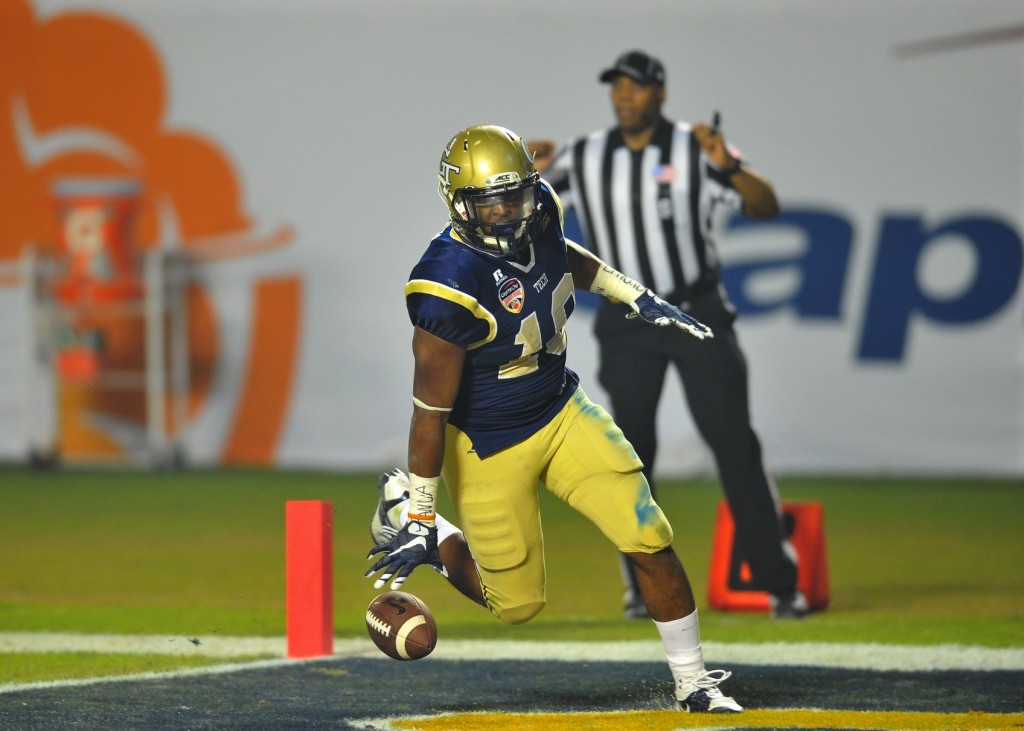 Florida State beat the Georgia Tech team that thrashed Mississippi State in the Orange Bowl. Are we really going to sit here and say that Florida State should not have been seeded first in the playoff? Being seeded third had a considerable impact on the Noles’ postseason fate.

However — once more with feeling — Florida State did. Not. Lose. A. Game. In. The. Regular. Season.

Yes, the Bowl Championship Series had to go, because other teams deserved their shot in the race for the national title. Ohio State and Oregon earned their way into the title game on Monday, and neither the Bucks nor the Ducks would have had a chance to contest the BCS championship. Florida State and Alabama would have played.

The way in which Florida State was wronged, therefore, has nothing to do with the BCS or its absence. Florida State deserved to contest the national title in a two-team system or in a four-team system. That’s not the point being raised here.

The central point to make is that Florida State should have been seeded first in the playoff. Had that happened, the Seminoles would have gone to the Sugar Bowl. Oregon, thanks to a non-conference win over Michigan State that Alabama couldn’t match, did deserve to be seeded second, but the Ducks should have hosted Alabama, not FSU, in Pasadena. Had Florida State been placed in New Orleans opposite Ohio State, the Noles might not have had a better opponent, but they wouldn’t have had to travel across the country, which — in light of the presence of another potential game on Jan. 12 — kept a lot of Seminole fans at home. Oregon enjoyed a huge partisan crowd in California and was very much in its element.

There’s no way to say with any certainty that the seedings and matchups determined outcomes — no, that’s not what’s being stressed here. The point is that an unbeaten team had more of a claim to a number one seed and the logistical advantages which ought to accompany a top seed, as is the case in the NCAA tournament. Florida State can legitimately say that it was wronged by this process — not the inclusion part, but the seeding component.

This brings up another point in time when FSU was jobbed by college football’s postseason: the 1996 season, when the Rose Bowl’s absence from the Bowl Alliance prevented the Noles from playing Arizona State for the national title. FSU had to be slotted against Florida in a Sugar Bowl rematch — that’s a game FSU should not have had to play again. The Noles lost to the Gators and lost the national title as well.

Yes, in the spirit of mentioning how the scales even out, Florida State got the benefit of a questionable decision in 1993, when it lost to Notre Dame but was voted national champion ahead of the Irish following the New Year’s games in January of 1994. However, that past-tense stroke of good fortune offers no real comfort for today’s Seminoles and their fans.

This team and fan base deserved the top seed and a short commute to the semifinals. It didn’t get them. Say what you want about Florida State, but let’s not end this college football season on Monday night without noting that the seeding component of the first College Football Playoff did the defending national champions absolutely no favors. This can be acknowledged even while conceding that Ohio State and Oregon fully deserve to be where they are.

Spare a thought for Florida State… and not a nasty one. “13-0” is one of the hardest feats in all of sports, and it was not honored by the playoff selection committee this past season. History ought to record that, though semifinal losers generally aren’t remembered the way champions are.