1 Burning Question: Is the offensive line going to be better?

It can’t get worse, right? Penn State’s offensive line has always been one of the weaker spots on the roster in recent years, and last season was no exception. The good news is it could be better. The bad news is it won’t quite be the 1994 offensive line either.

Penn State’s offensive line has been the result of recruiting sanctions since 2012. Bill O’Brien concentrated much of his recruiting efforts on players at skill positions when given only 15 scholarships to hand out. While that was good for adding players like Christian Hackenberg and DaeSean Hamilton and Adam Breneman, it left a void up front. And without an offensive line, it doesn’t matter if you have Joe Montana and Jerry Rice (or Kerry Collins and Bobby Engram I should say) on the field. James Franklin has been able to address a number of depth issues as the NCAA sanctions have been eased and lifted, and offensive line has seen some holes plugged as a result. Penn State has welcomed the additions of Stanford graduate transfer Kevin Reihner and JUCO transfer Paris Palmer to add some veteran experience, and the addition of tackle Sterling Jenkins through recruiting could help out quickly this season.

Much of what to expect from Penn State will hinge on improvement up front, and Herb Hand is a well-respected coach who offers good reason to believe things should get better in 2015. Penn State ranked 14th in the Big Ten in rushing offense (101.92 yards per game) and allowed a Big Ten-worst 44 sacks last season. Hackenberg may be great, but he can only do so much when he is on his back and scrambling for his life in and out of the pocket.

30.05% – Penn State opponents’ third-down conversion success rate. Generally speaking, Penn State’s defense can carry the team and put the offense in a decent position to do something. Few teams in the Big Ten managed to get off the field as well as Penn State (only Wisconsin and Nebraska had better third-down defenses). If the defense can keep that trend going, the pressure will be on the offense to take advantage.

Why It Matters: This… 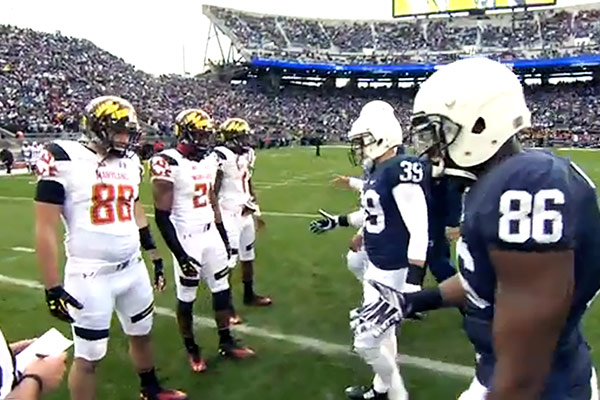 Last season Maryland visited Penn State for the first time since the Nittany Lions joined the Big Ten, and the Terrapins were on a mission. A pregame scuffle as the teams took the field was initiated by Maryland players. That was followed by a pregame non-handshake from the Maryland captains. To make things worse, Maryland left town with a win. A win this year in Baltimore, which should allow for a good Penn State crowd south of the Mason-Dixon Line, would be a good response by the Nittany Lions; then this potential rivalry can really take off.

Why it Matters: Timing and revenge. Northwestern embarrassed Penn State in front of a Beaver Stadium homecoming crowd last season, 29-6. Penn State’s offense was shut down and humiliated by a mediocre Wildcat squad. Of the losses suffered by Penn State last season, this was the worst of the bunch. For pride alone, this is a must-win game for Franklin and his team. The timing is also important. The road trip to Northwestern comes a week after hosting Illinois and a week before the bye heading into a home game against Michigan (more on that one in a moment). Going into the bye week in mid-November would be better with a little momentum.

Why it Matters: By this point in the season, we should have a very firm idea of what Penn State and Michigan are. Assuming each team sees at least some marginal improvement from their respective 2014 seasons, it should be easy to suggest Penn State should manage to win this game at home, but it’s certainly not a given. Penn State has two perceived automatic losses on the schedule with road games at Ohio State and Michigan State, so it cannot afford to drop this game to the other big name in the division. Call this one a revenge game as well, because Penn State got the short end of a special teams offside call last season in Ann Arbor. Penn State’s offense was a mess, though, so it would not be wise to assume the Nittany Lions would have won the game if the call went their way. But, it still stung.

Christian Hackenberg, QB – The best quarterback in the Big Ten? Maybe. NFL types see the skills and potential in Hackenberg’s game to be worthy of a franchise-changing draft pick as early as next season (being recruited by Bill O’Brien may help), but the junior will need a bit of a bounceback season in Happy Valley. I have explained why Hackenberg did not have a great seaosn in 2014 (see: offensive line), but he did make some mistakes on his own, which may have come from trying to force something to happen, knowing he had little protection. Entering his third full season as a starter (he’s started every game since his freshman season), now will be the time to see him put everything together.

Akeel Lynch, RB – Penn State has some good wide receivers to pay attention to, as well as tight ends, but this could be a solid season for Akeel Lynch. Once again, if the offensive line gets it together, Lynch should see some room to run. He may not have game-changing speed and he may not bowl people over, but he could be a key ingredient in Penn State’s offense to take some of the pressure off Hackenberg.

Anthony Zettel, DE – Zettel was one of the true breakout players for Penn State last season, but now he will no longer catch anyone by surprise. Zettel has the ability to get into the backfield often enough to cause some problems for opposing quarterbacks and stuff some runs before they get going. Look for him to be double-teamed at times.

Nyeem Wartman, LB – It wouldn’t be Penn State if we didn’t point out a linebacker. Nyeem Wartman is likely to be moved back inside after getting starting time outside the past couple of years. Look for him to lay some lumber when given the opportunity.

5. Penn State gets a 1,000-yard receiver in DaeSean Hamilton.

As a freshman last fall, DaeSean Hamilton led Penn State with 899 yards, but just two touchdowns. Look for those numbers to increase this season. Hamilton will not be alone as a dependable target for Hackenberg, but he will prove to be the most consistent. He ended the year on a slower note compared to the first half of the season (1 catch for six yards against Illinois?!), but he should improve in his sophomore season. Penn State doesn’t typically pump out 1,000-yard receivers. Allen Robinson did it twice before heading to the NFL. Hamilton has time to leave his mark.

4. Penn State survives a scare from Temple in the opener.

Penn State has traditionally dominated Temple (the Owls have not beaten Penn State since World War II), but the Owls have given Penn State some scares in more recent times. While the scoreboard may tell another story, Temple has played Penn State pretty tough in recent seasons, and this year could be another tough battle with the program on Broad Street. Temple’s defense is molded to take advantage of a Penn State offense still attempting to figure things out on the offensive line. If the O-line starts off on shaky ground, Temple could frustrate Penn State early on. Penn State will still find a way to go home with a win, but the Nittany Lions will have to earn it against one of the potential risers in the American Athletic Conference.

In the history of Penn State football, here are the players to pass for 3,000 yards in a single season: Daryll Clark, Matt McGloin. Look for Hackenberg to add his name to that short list this fall. With Hamilton going for 1,000 yards and a stable of trusty hands existing at other receiver positions and tight end, Hackenberg could make a push to end the season as the Big Ten’s leading passer. Michigan State’s Connor Cook went for 3,214 yards last season, topping Ohio State’s J.T. Barrett (2,834 yards) and Hackenberg (2,977 yards).

The best case scenario for Penn State in 2015 is, realistically, a third-place finish in the Big Ten East. Ohio State figures to be the easy favorite, with Michigan State not that far behind. The Big Ten and Big Ten East are top heavy with those two programs right now, but Penn State is heading in the right direction (so is Michigan). The pieces are in place for Penn State to be an improved team in 2015, but not enough is in place to get by the Buckeyes and Spartans just yet, barring some significant injuries or collapses at either program. A third-place finish still keeps Penn State ahead of Michigan, though, and keeps closer regional rivals Rutgers and Maryland in the rearview mirror. For a team that won just two Big Ten games last year, finishing in third place should be seen as a solid victory for the upcoming season.

It has only been a few years, but it seems like ages ago when Penn State last played on New Year’s Day. The last one, of course, was one to forget at the end of the 2011 season. Case Keenum and Houston blew away a dispirited Penn State squad in the TicketCity Bowl. This year should have a different vibe (of course). Penn State should have enough in the tank for an eight or nine-win season, and that could land the team in one of the Big Ten’s New Year’s Day bowl games in the state of Florida.