1 Burning Question: Will talent compute in wins on the field for Washington?

Despite having several players taken in the first few rounds of the NFL draft last season, the individual talent on the field has not translated into team success just yet for Washington. In addition, the Huskies have lost quarterback Cyler Miles before the season even started with a chronic hip injury. Miles started 12 games last season; replacing him will be a complicated process. In addition, the defense was depleted by departures and will have several positions that need to be filled. How quickly the reinforcements adapt to the Pac-12 will determine how smoothly Chris Petersen’s second season goes.

Why buy Washington this year? The talent is there for Petersen. The only question is how long it takes him to instill his philosophy and restart a winning culture in Seattle. With the amount of players UW lost after last season, the challenge is clear, but with another season in the program, Petersen will have the squad inching in the direction that led to his tremendous success at Boise State.

78 — This was Washington’s rank in total defense last season. Even with all of the talented players on the defensive side of the ball that were lost to the NFL, including first-round picks Danny Shelton, Marcus Peters, and Shaq Thompson, the Washington defense still finished 78th in the nation in total defense. Some of that speaks to the offensive talent in the Pac-12, but the unit will need to come together quickly to improve on the number, which will be crucial to the success of the team.

383 – The number of yards Dwayne Washington racked up in the final three games of the 2014 Pac-12 season. Washington had games of 148 yards at Arizona, 100 against Oregon State, and 135 at Washington State. In addition, he had six touchdowns in the final four games of the Pac-12 slate. The progression of Washington is an absolute key to how successful the Huskies will be on the offensive side of the ball.

Why it matters: This marks the first time Washington has played USC in three years, with the expansion of the Pac-12. Despite the break, the Huskies will try to rebound from recent struggles with the Trojans, and this contest kicks off three straight games against heavy hitters in the Pac-12. How the Huskies play over this stretch could determine how the season pans out. Beating Steve Sarkisian would be a reward in itself, too.

Why it matters: The Ducks have simply owned Washington in recent years. The games typically are not even close, as Oregon runs the Huskies off the field. While Marcus Mariota is gone, the UO offense will not be slowing down. A demoralizing defeat again at the hands of Oregon could be devastating for the season.

Why it matters: In the final game of the mid-October gauntlet, the Huskies battle Stanford, which has had UW’s number over the past decade. While many of the early games were mostly blowouts, Washington has been getting closer to the Cardinal over the past couple of seasons. A win in the matchup this season would be huge and create some momentum to wrap up the season. 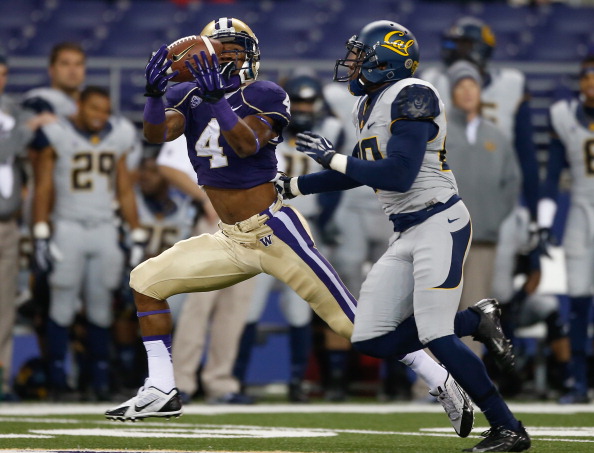 Jaydon Mickens, WR – With the loss of Miles at quarterback, Mickens will have to step up big this season. The leading receiver last season for Washington, Mickens uses speed as his main weapon. Last season, Mickens averaged over 10 yards per reception and scored four touchdowns. He will need to build on those numbers for the new quarterback if the Huskies hope to have any semblance of a passing attack.

Dwayne Washington, RB – The Huskies return Washington, who was the leading rusher last season and averaged over five yards per carry. Even with the size of a punishing back, Washington showed that he was a legitimate big-play threat last season as well. As previously mentioned, Washington came on late in the season and was an unstoppable force for the Huskies. In those three big games toward the end of the season, he had runs of 68 against Oregon State, 66 against Arizona, and 60 against Washington State.

Dexter Charles, OL – At left guard, Charles is the only returning member of the line who saw mainly starting time in 2014. As a four-year player in the program, Charles brings plenty of experience to break in a new group. Charles will also be opening holes for Washington, as the Huskies will likely give him the ball as often as possible. Charles also comes back with something to prove, as he was held out of the team’s bowl game last season, due to academic issues.

Budda Baker, S – Having lost a number of players on the front seven and top corner Marcus Peters, experience on defense comes into question for the Huskies. Baker is the best player on that side of the ball and will need to develop into the leader. Last season, as a freshman, Baker collected 80 tackles for the squad, and will need to do even more this season to keep the inexperienced defense afloat.

5. The Huskies will struggle on defense early, but will improve drastically as the season goes along.

While they have lost a lot of talent all over the field, the defensive side of the ball may have been hit the hardest, as three players left as first-round picks to the NFL. To make it harder, each came from different levels of the defense. While the challenges that follow this are clear, they also give Petersen an opportunity. This allows him to find new leaders to instill the philosophies he promotes, thereby enabling him to build the program with his own players. After feeling everything out, the defense is bound to improve all season and be playing its best ball in November.

4. Washington will get bowl eligible with a season-ending win against Washington State.

While the rebuilding Huskies may struggle to win more than the eight games they won last season, becoming bowl eligible this season will be a win. It will likely come down to the wire, but expect Washington to knock off its in-state rival in the final contest to get it done.

3. Dwayne Washington will become a star.

With the way that the season wrapped up for Washington, combined with his talent, it is hard not to picture his junior season being a huge success. In fact, Washington could be the top running back prospect in the Pac-12 before it is all said and done. He has the unique combination of size and speed that makes players elite.

After more than just getting his feet wet as a freshman, Baker showed the great talent he possesses. With another year of experience and growth, along with moving into a leadership role on the defense, Baker will flourish even more as a sophomore. Already a tackling machine last season, Baker is a player who ranges all over the field and will quickly become a household name.

1. The Huskies will bring back a battle tested and talented team in 2016.

Despite 2015 likely not being the breakout season for Petersen at Washington, there are lots of pieces in place. In addition, these pieces are going to see the field and lots of it this season. Many of the players on the roster who will gain experience this season will also be returning next season. Washington could very well be a squad that will be ready to achieve at a high level in 2016 and the following seasons.