1 Burning Question: Is this the year Miami finally plays in the ACC Championship Game?

When Miami joined the ACC in 2004 along with Big East partner Virginia Tech, it was a move that was thought to bring some balance to the ACC’s football membership, and help improve the ACC’s football reputation and standing in the ranks among power conferences. To this point, with 11 seasons in the record books Miami has yet to hold up its end of the bargain on the football field. Miami has yet to play for an ACC championship with zero ACC Championship Game appearances in a span that has seen Duke represent Miami’s Coastal Division even once (and Virginia Tech five times, Georgia Tech four).

Miami, in the meantime, has managed to finish with more than seven wins just four times since joining the ACC, which includes two 9-3 seasons the first two years Miami was a part of the ACC. Al Golden is now in year five with the Hurricanes, and the pressure to at least play for a conference title may never have been hotter.

So stop us if you have heard this one before: is this the year Miami finally breaks into the ACC Championship Game?

24 – Number of turnovers for Miami’s offense in 2014. Maybe 24 turnovers doesn’t sound too crippling, but that is an average of two turnovers per game. To make things a bit more alarming, this was the second season in a row the offense lost the football more times than the previous season. This trend needs to turn around.

78.7 – Miami’s 2014 red zone percentage. Only two teams in the ACC had a lower percentage of red zone scores than Miami: Clemson and Wake Forest. The key to a successful season for any offense is to take advantage of opportunities inside the red zone, and Miami has room to improve in this category. For the record, the defense could pick up some slack too. The Hurricanes allowed a score 82.61 percent of the time when opponents reached the red zone, and only three teams gave up a higher percentage of touchdowns inside the 20-yard line.

Why it matters: Virginia Tech is likely to have another very strong defense in the ACC this season, and the Hokies come right in the middle of what is possibly the toughest three-game stretch in the entire ACC this season. A week after playing at Florida State, the Hurricanes are right back at it against a team they dismantled last season. If Miami is going to take a lead in the ACC Coastal Division, a home win against the Hokies is a good way to get it started.

Why it matters: A week after hosting Virginia Tech, Miami gets Clemson at home to wrap up that potentially brutal three-game ACC stretch. If Miami beats Clemson (and Virginia Tech) to get out of this three-game sequence with a 2-1 record, Miami fans will be making plans for Charlotte at the end of the season, possibly for a rematch with either Florida State or Clemson.

Why it matters: Since coming into the ACC, Miami may not have been able to hold the upper hand against as many teams as you might expect, but The Hurricanes have controlled UNC for the most part in the last few years. Coming late in the season, this game could potentially be one that plays a big role in the wide-open ACC Coastal Division race. Expect a close game too, because all but one of the five meetings between the two played in Chapel Hill since Miami joined the ACC have been decided by six points or fewer, and all have been single-digit differentials.

Brad Kaaya, Quarterback – It goes without saying the most important position on the football field is the quarterback, and Miami appears to have a good one this season. As a freshman last season, Kaaya took control of the passing game and played all 13 games en route to ACC Rookie of the Year honors. In those games he passed for 3,198 yards and 26 touchdowns, and he could get even better this fall. 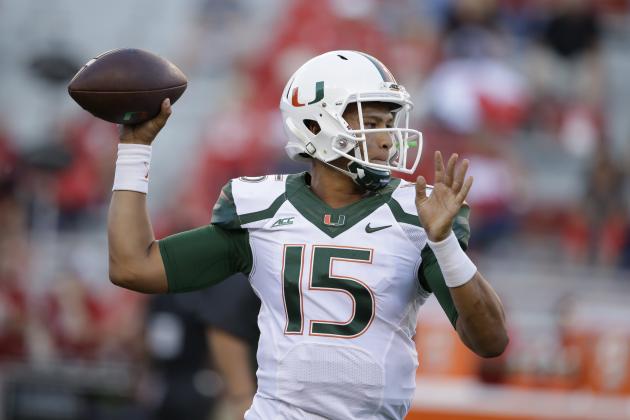 Stacy Coley, Wide Receiver – The junior wide receiver has a real opportunity to see his role in the offense increase this season after a few departures to the NFL and graduation. Last year Coley caught 23 passes for 184 yards and zero touchdowns, but the season before he caught 33 passes for 591 yards and seven touchdowns. The potential is there, and he should be a key receiver for Kaaya.

Deon Bush, Safety – Bush can be a playmaker on defense, and Miami could need that at times. Bush is a solid safety with the ability to force turnovers. Last fall he forced five fumbles, and Miami may need that to continue this year.

Jermaine Grace , Linebacker – Miami has a strong lineage of linebackers to be proud of, and Jermaine Grace may be one of the next in line if things go well. Grace was the team’s second-leading tackler last season, behind only Denzel Perryman.

5. Miami gets revenge on Nebraska

One of the low points of Miami’s season last year came in Nebraska, where a game turned a bit ugly and caused the usually hospitable Husker fans to boo the Hurricanes as they left the field. It really was a surreal scene. This year Miami gets Nebraska at home, and the Huskers could look ripe for the picking by the Hurricanes with a new head coach and the loss of Ameer Abdullah. Early on, Nebraska could be a quality win even though the Huskers have some questions of their own.

4. Brad Kaaya is the ACC’s Offensive Player of the Year

This would bode very well for Miami if it holds true. There are some really talented players in the ACC, but with one year of experience under his belt, we could be in store for a solid showing from Brad Kaaya. More of the offense will have to funnel through him as the Miami offense loses Duke Johnson, and Kaaya will have some notable spotlight games in which to shine.

3. Miami’s defense impresses against Florida State in a losing effort

Florida State is the team that comes at the beginning of Miami’s brutal three-game stretch in October. In Tallahassee, we could get another compelling battle between the in-state rivals after last year’s nail-biter in Miami. This is one where Kaaya could struggle at times, which will put the pressure on the Miami defense. The Canes will give Florida State a challenge, and hold them down for much of the game, but in the end it just won’t be quite enough.

Earlier it was discussed how important that Clemson game could be for Miami’s chances this season. Go ahead and put me on the record right now as saying Miami wins that game to build some huge momentum into the final month of the season. It will not be easy, but it should not be easy, either. Miami should feel confident playing Clemson, and that will show in the big home game when (hopefully) a good crowd comes out to watch.

1. Miami will play for the ACC championship

This preview started by asking whether or not Miami would finally be able to break through to the top of the ACC Coastal Division to play for the conference championship in Charlotte. It will end by saying yes, the Canes very well could. It is a wide-open division, and you can make cases for almost every team in it. However, this will finally be the year Miami gets a crack at the ACC title game that has eluded the program since leaving the Big East for the ACC.