A coaching performance often stands on its own merit, but it can sometimes expose the extent to which an opposing coach lacks answers of any shape or form. The 10 most notable coaching performances of the bowl season fit into both categories. We’ll provide the details:

The aggressiveness of Utah’s approach on offense in this game — which was great to see — only magnified the timidity of the Utes’ offensive staff late in the loss to Arizona State. Obviously, Utah’s offensive staff will be different in 2015. If Whittingham does indeed stay on in Salt Lake City (and it seems he will), he needs to liberate his offensive coordinator in more ways than one.

The caustic and easily irritable Mora showed that he can coach at a high level. He and his team ran rings around Bill Snyder and Kansas State, exercising a lot more creativity and attention to detail throughout the first half. If Mora can only exhibit this level of coaching more consistently (similar to Whittingham at Utah), his program could really take off.

The ability to help Christian Hackenberg play his best football in this game is one testament to Franklin’s level of coaching skill. Convincing his team to keep fighting after falling behind by two touchdowns to a run-based opponent represents another awesome feat on Franklin’s part.

The Thundering Herd could have grumbled about their bowl placement and could have put forth an ordinary effort against Northern Illinois. Instead, Marshall played dynamic and imposing football, recalling what it had done in the first half of the season. Holliday clearly brought his team back to a previous standard, and that was achieved by motivating his players, internally resetting their dials and getting them to take the Boca Raton Bowl seriously.

By far the best coach of any losing team in a bowl game, Cutcliffe outflanked Arizona State’s Todd Graham — who isn’t chopped liver as a coach in his own right — and put Duke in position to win the Sun Bowl. Anthony Boone simply made one more bad read: On the game-sealing interception in the final moments of regulation, Boone had a man open over the middle on a crossing route with no safety help over the top. The play was there, but Boone opted for a fade. Don’t blame Cutcliffe. He had Duke ready to play in a bowl for the third straight season. One of these years, Duke will win its bowl game.

The former assistant to Chris Petersen looked very Petersenian in leading Boise State to a Fiesta Bowl win. Harsin’s team would have won by a larger margin had Jay Ajayi not fumbled in the fourth quarter, and had a trick-play pass (to a wide-open receiver) been thrown accurately. Few coaches enjoyed a better, more validating bowl experience than Harsin.

Oregon’s successor to Mr. Kelly showed that he can match wits with Jimbo Fisher and not only survive, but thrive. Helfrich had Oregon ready to conquer both the Noles and the perils of an extended layoff, which have been problematic for tempo offenses in past bowls.

While Fisher blew multiple timeouts due to a lack of organization during the Rose Bowl, Oregon projected smoothness and polish the whole way through. The Ducks made a statement, but their head coach did as well.

The Horned Frogs could have sulked. Gary Patterson wouldn’t let them do so in the Peach Bowl. Moreover, Patterson — while getting his guys excited to play — also provided an electric game plan on both sides of the ball, which embarrassed Ole Miss and Hugh Freeze.

The biggest coaching mismatch in the bowls was Paul Johnson against Dan Mullen. Mississippi State looked just as calcified and stagnant as it became in November, following its immensely successful October. Georgia Tech is a team that has evolved and developed over the course of the season, and it can be argued quite convincingly that the Yellow Jackets played their best game of the whole season in their bowl game, capping a steady ascendancy under Johnson, who has promptly obliterated any and all questions about his job security in Atlanta (not to mention his reputation as well). 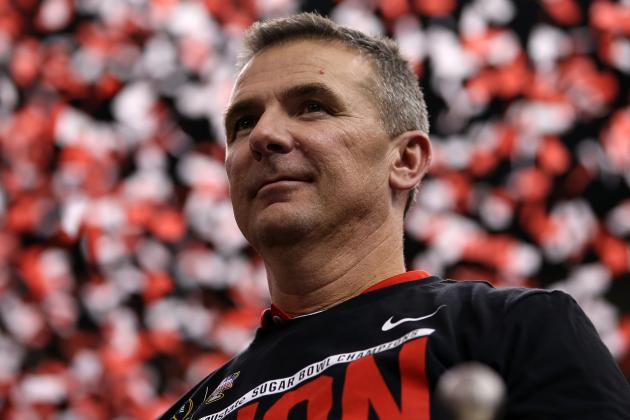 Nick Saban might have four national titles to his credit, but Meyer is one win away from a third. If he claims this crown, Meyer will be able to tell Saban and everyone else that he won a championship trophy with a third-string quarterback. No staff worked better than the Buckeyes’ offensive braintrust did in the Sugar Bowl. Saban, by contrast, could not fix the problems that ailed his secondary throughout the regular season.