The city of Urbana, Ohio will be taking more of a simple, direct route.

This week the mayor of Urbana, Ohio signed an edict declaring that the town will drop the final “a” and change its name to Urban, Ohio to honor Urban Meyer and the Buckeyes on January 12th. 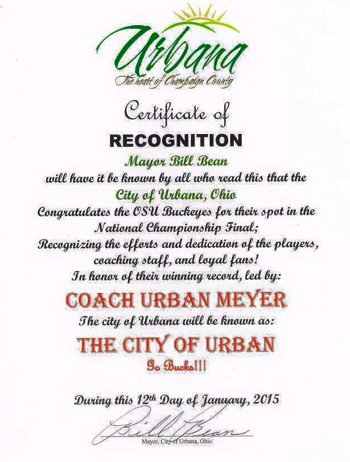 Urbana is a city of just over 10,000 people located an hour west of Columbus.  It also happens to be my hometown.  And like almost every other small Ohio town, it is obsessed with all things football.  And with all due respect to the Urbana University Blue Knights and their new on-campus stadium, the high school football stadium of the Hillclimbers is the epicenter of town.  Consider dropping the “a” and christening itself “Urban” as coming full circle from the time the movie Little Giants added an “i” to the city’s name to create the mythical town of Urbania, Ohio in the mid-90s.

Now we’re left to wonder who the first Oregon city will be to change their name to “Mariota, Oregon” or “Helfrich, Oregon.”  If you’re going to judge the passion of the two fanbases by how many city governments are actually willing to temporarily change their own names to pay tribute to a football team, the Buckeyes are way ahead of the Ducks at this point.  And trust me, if Meyer actually leads the Buckeyes to a national title on Monday, Urbana is just crazy enough about football to make the change permanent.

Award winning sportswriter at The Comeback and Awful Announcing. The biggest cat in the whole wide world.